The school’s president wrote about his own experiences as a Black man in America, and his exhaustion over the continued state of police brutality in America in the aftermath of George Floyd’s death. 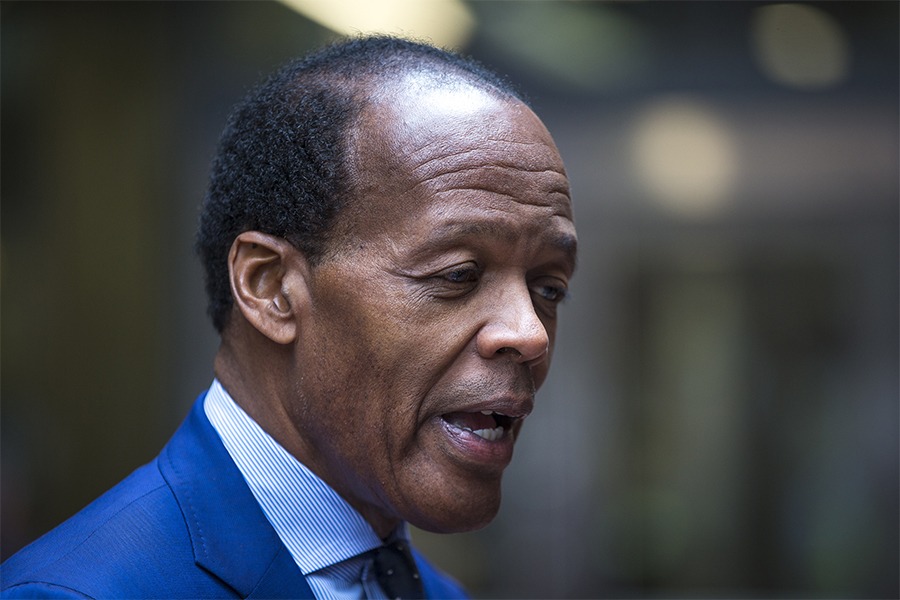 Photo by Nic Antaya for the Boston Globe via Getty Images

Emerson President Lee Pelton shared the following letter with students on May 31. We’re running it below in its entirety.

Today, I write to you as a Black man and as President of Emerson College.

There is no other way to write to you, given recent events.

I didn’t sleep Friday night. Instead, I spent the night, like a moth drawn to a flame, looking again and again at the video of George Floyd’s murder at the hands of a Minneapolis white police officer. It was a legalized lynching. I also intently watched the fiery protests in American cities.

America is on fire, I thought.

Even in the face of a viral pandemic that had closed down much of human society, it could not stop a black man from being murdered in public view.

I was struck by the callousness and the casual dehumanization of Mr. Floyd. To that officer, he was invisible – the Invisible Man that Ralph Ellison described in his novel by the same name.

Black Americans are invisible to most of white America. We live in the shadows – even those of us, who like me, sit at the table of bounty. Ironically, at our colleges and universities we are hyper-visible in classrooms, work places, social settings, and as we go about our daily lives.

On Saturday, I was very angry. The persistent structural racism that under girds American society and permits the police and others to kill black people is pernicious and ubiquitous.

We mourn George Floyd. But let’s not forget the other George Floyds of which he is but one:

Ahmaud Arbery was jogging when white vigilantes pursued him in their pick-up trucks, shot and killed him. A Harvard educated black birder, Christian Cooper, was bird watching when a white woman walking her dog weaponized the lynching trope in an attempt to summon police.

Do you remember Trayvon Martin or twelve-year old Tamir Rice or Sandra Bland or Philando Castile or Eric Garner or Freddie Gray or Botham Jean or Breonna Taylor?

Say their names. This is not new.

All of them dead. Each of them invisible.

I’m still angry. As President, I didn’t want to write in anger. But I also didn’t want to write the kind of platitudinous letters that ordinarily appear after these kinds of killings. I consulted my children on Saturday. One said, “Dad, I don’t think you need to say anything if you don’t want to. Who even knows what to say right now. And as you said, it’s more up to white people to say something now.”

I consulted friends and one of the wisest among them said, “Let the world know how you feel. Everyone who gets it will be better for it; the others, who cares. In some context anger is not an emotion; instead, it’s a moral.”

And so, I write today.

I watched the video over and over again well into the morning hours because I was mesmerized by the casualness with which the Minneapolis police officer Derek Chauvin murdered George Floyd. Chauvin dug his knee into his neck for almost nine minutes, even as Floyd repeatedly said, “I can’t breathe. I can’t breathe.” As he called on his Mama before he took his last breath, Chauvin continued to talk, he looked as if he didn’t have a care in the world. He didn’t stop until Floyd was unresponsive.

George Floyd was invisible. And it was his invisibility, a brutal white power structure and Chauvin’s dehumanization of him that killed him.

Floyd has a history. And so do I.

I was born in a house that had no indoor plumbing until I was six years old. Until they died, my mother and both of my grandmothers cleaned houses for middle class and rich white folks. My father was a laborer until he got a good paying job working at the City of Wichita, Kansas, where I was born and raised.

In my lifetime, I have been called the n-word by white people in every state and every city that I have ever lived in.

I have been pulled over driving while black more times than I can remember. I have been spit on by a white parking lot attendant. I was stopped 20 feet from my house by two white police officers in their cruiser, the searing heat of their spot lights on the back of my neck, guns drawn on either side of my car because I looked like a black man who was alleged to have stolen something from a convenience store. When I was living on the West Coast, I was pulled over twice in a single night by police officers because, according to each, I didn’t turn on my turn signal the proper feet before a stop sign. As President of Willamette University, two teenage boys drove up on the sidewalk to block my path home because I looked like someone who was suspected of stealing from neighborhood homes. When I asked what that person looked like they described someone more than twenty years younger than me. While visiting my cousins in Conway, Arkansas in the 70’s, I suffered the deep humiliation of having to go to the back alley of a local restaurant to order food. I was twenty years old. I was angry at the overt racism and at my cousins for enduring such indignities almost a decade after the passages of the two Civil Rights Acts of the mid-60’s.

That’s my history. And I have dedicated my life’s work to social justice in just about every aspect of American life, but especially for young people who grew up like me.

I also write to you today on the anniversary of the 1921 Tulsa, Oklahoma riots in which Greenwood, then the wealthiest black neighborhood in America (called the Black Wall Street), was attacked by mobs of white residents because a 19-year old black shoeshiner allegedly bumped into a 17-year old female white elevator operator. More than 800 black people were admitted to the hospital, and 6,000 Greenwood families were displaced as white vigilantes deputized by law enforcement killed more than 300 hundred black people and destroyed more than 35 square blocks of Greenwood, some carried out by private aircraft. It is the worst single incident of racial violence in American history, and I suspect not one in ten in Americans have ever heard of it.

What happened to George Floyd is not new. It is as old as 250 years of slavery and the Jim Crow laws that sought to marginalize and shut out black Americans from American society.

As my wise friend reminded me, quoting James Baldwin, “Any real change implies the breaking of the world as one has always known it, the loss of all that gave one an identity, the end of safety.”

So, I have no words of comfort today because they would be inauthentic. They would absolve so many from coming to terms with their own silent complicity in the world in which we live.

As I wrote to someone today, “This is not a black problem, but a structural issue built on white supremacy and centuries of racism. It’s your problem. And until you understand that, we are doomed to relive this week’s tragic events over and over again. What changes will you make in your own life? Begin with answering that question and maybe, just maybe we will get somewhere.”

The most important question is: What are you going to do?

At an appropriate time, I will gather the community to talk about what I have written and what we might be able to do together to address racism in America, beginning first of all with an honest appraisal of who we are and what we stand for.