Three Black Youth Activists on Organizing, Educating, and the Change They Hope to See

At the protests and demonstrations across the city since George Floyd's death, Boston's youth have been at the forefront. 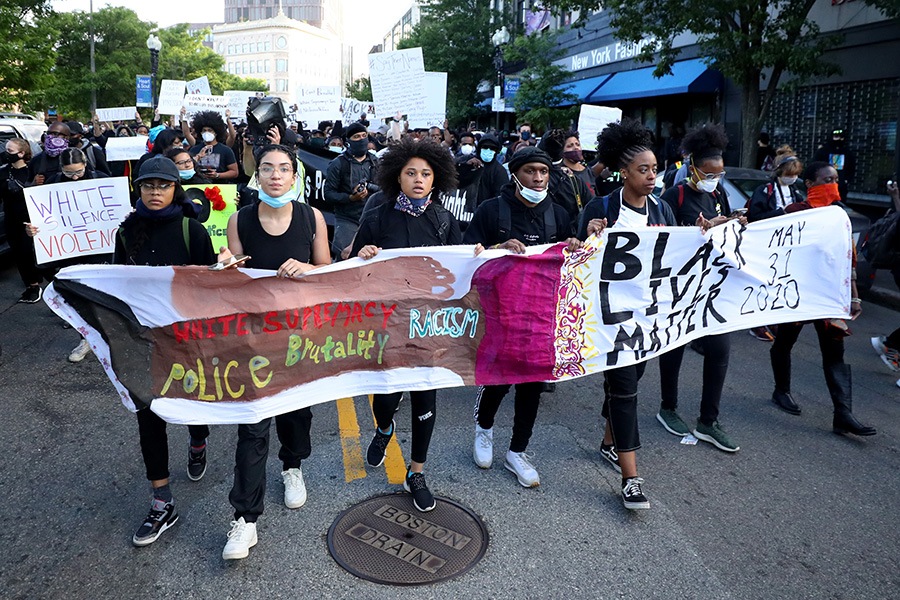 Demonstrators protest in response to the recent death of George Floyd on May 31, 2020 in Boston, Massachusetts. Photo by Maddie Meyer/Getty Images

From the March for Our Lives to the climate strikes to today’s new wave of Black Lives Matter protests, young people have led the charge for change. Many of them barely old enough to vote, this new wave of activists is equipped with Facebook, Instagram, and the frustration-fueled energy that comes with growing up against a backdrop of climate crisis, gun violence, a global pandemic, racism, and police brutality. We spoke with three Black youth activists in the Boston area to get a glimpse into this new generation of youth taking to the streets.

Carrie is a college freshman at a Massachusetts university majoring in business management and minoring in political science. For the past five years, Carrie has done community engagement work with the Boston Community Action Team, elected officials like City Councilor Julia Mejia, and Teen Empowerment, a nonprofit program that encourages youth to enact social change. She has organized events from basketball tournaments and barbecues to large-scale dialogues on race, and has served as a speaker and panelist at events in Chicago and Washington D.C. Over the past two weeks, Carrie has been sitting on virtual panels, speaking to her followers on Facebook Live, and accompanying first-time protesters to demonstrations across the city.

On how she began her career as a youth activist:
I used to live in the suburbs, and then my family ended up moving to Dorchester. When I moved to Dorchester, I saw huge inequity and inequality in the opportunities, quality of education, and quality of life overall in Dorchester versus the suburbs. I wanted to get to the bottom of that because I felt like I was seeing the effects of racism, but I wasn’t seeing the root causes. Also, and I know this is kind of off topic, but I was inspired by Stan Lee, the creator of the Marvel movies. He said something very important to me: that you either want to be on the right side of history or you want to be on the wrong side of history, and that he tries to be on the right side. And so from then on, I was like, “You know what, Stan Lee? I’m standing with you there on the right side.”

On the changes she wants to see emerge from this movement:
I think a lot of people misconstrue the Black Lives Matter movement and only associate it with police brutality. To me, Black Lives Matter means Black lives matter all over the board and in every area of society. So I want to see us reforming the criminal justice system, supporting bills that will end mass incarceration and putting people in jail. I want to see more rehabilitation for Black men coming out of jail. I want to see that Black lives matter in the political world—getting more representatives and elected officials that understand our communities and the struggles we came from. I want Black lives to matter when it comes to housing, and to economics. There’s intersectionality to being Black, and we should be taking the opportunity of this moment to shine a light on all of the issues that connect to police brutality, because the root cause of it all is systematic oppression, racism, and white supremacy.

On her parents’ response to her work:
The work that I do as an activist comes with taking risks, especially when we’re in the midst of a pandemic. My mom is very concerned about my safety. She called me when I went to the protest on Tuesday and she was like, “I know you’re in Franklin Park! I told you not to go out of the house!” My dad, though, is like, “You know what, I can’t even stop you.”

On how activism has changed her life:
Activism has taken me to places that I would have never been, and it’s taught me how to use my voice, but most of all, activism has taught me how to care. I’m just a huge believer in love. Like, people call me Care Bear, that’s my nickname. Love is just wanting more for somebody else than what you want for yourself. So activism work is really all about love—the basis and the foundation of it is just trying to convince people to care about somebody else.

Her advice for young people who want to get involved in youth activism:
To the young people who are anxious and shy about doing this work: Say something. Share something on Facebook that you care about. Talk with your teachers. Talk with your friends, and they’ll help validate your ideas, thoughts, and feelings. Your voice matters, and what you care about in your heart matters.

Jacory is a high school junior and Mattapan resident. He has been involved in youth activism since he joined Teen Empowerment when he was 14. Over the past two weeks, Jacory has been working with Teen Empowerment and the My Brother’s Keeper Initiative, organizing various events for youth in the city and connecting with local officials over the phone, including Congressman Joe Kennedy, to discuss the ways these lawmakers could support the youth movement.

On how the past two weeks have made him feel:
To see the systemic problems that have been going on for generations and generations come to the spotlight for the whole world to see this week has been beautiful. You know how we learn history in school, and you feel like you can’t really do much about it, because it’s old? Now, we have an opportunity to make history, to apply the things we learned in school and to make sure our voices are heard.

On the best practices of youth organizing:
At Teen Empowerment, we learn a lot about community organizing, which helps use our emotions in a structured way. It’s dope to be able to apply those skills to what’s going on right now. We’re organizing community events and vigils, we’re promoting these movements on social media and by word of mouth, and we’re asking ourselves things like, “Who are we trying to target? Who are we trying to gather?” We have to make sure we do this in the most organized way possible—the system is structured, so our response needs to be structured as well.

On the role adults can play in the youth activism movement:
A lot of adults say they’re proud of the young people right now for standing up for themselves and their communities and their people. I’d like to see those adults helping us out, being a backbone for the youth. I’d love to get some guidance from some old folks who were around throughout the civil rights movement. I think they could have different strategies and thoughts that we could apply to what’s going on right now. We need mentors—we need role models to look up to and to lead us through this journey.

On how he’s staying motivated:
There are youth in my community who look up to me. I’m not going to sit here and act like I’m doing something when I’m really not. This is clearly history. We’re in the position right now to make it what we want to make it, and I’m feeling uplifted. And the reason why is because I have faith. I’m going to keep a warrior mentality throughout this, because I believe that change is coming, and that it’s in the process right now as we speak.

Kenneth is a college sophomore studying philosophy at a Massachusetts university. In high school, Kenneth participated in the METCO program, which enrolls Boston students of color in predominantly white school districts. Over the past two weeks, Kenneth has been wrapping up his school year from a distance, while attending protests across the city of Boston and using his social media platforms to educate his followers on racism and social justice.

On his dedication to his activism work:
I know that any day, I could die just by being a Black person walking down the street. I could die during a routine traffic stop. I could die from buying a bag of Skittles. I could die from doing just about anything. Having to deal with that reality pushes you—it makes you fight for what is unobtainable because it’s my life.

I’m so passionate about this. This is my fight—this has always been my fight, since I first touched down in my predominantly white high school as a freshman. I remember when I was a freshman, I was raising my voice about cultural appropriation—at that point there was no “we,” it was just me. Now, these conversations that I’ve been having for the past six years are finally starting to be talked about.

On what he’s seeing on social media:
On Instagram, I think that [my white classmates] aren’t doing enough. I still have people who are posting like, vacation selfies, and it’s like sis, read the room right now. Like I know you’re seeing everyone and their mama talking about Black Lives Matter. I know this is what your timeline is consistently about. So why are you just closing your mind and being like, “missing Bora Bora!”?

A lot of my friends only use Instagram as their main social media platform, and I’m like, I really wish you would write more things. Because yes, a picture can be worth a thousand words, but actual words can be worth an entire book. Writing out your ideas and explaining to your followers what you went through personally to understand this movement is very informative, and it lets people know that they’re not alone.

On his Facebook and Instagram activism:
I’m always in the role of having to educate people, and there hasn’t been one time I’ve had the privilege to step aside from that. Right now, we’re seeing a push for white people to self-educate, and I think that’s great, but I also know that a lot of people don’t have a jumping-off point. A lot of people don’t know where to look. So I feel like it’s my duty, if someone is struggling hard to educate themselves, to help them out. I know that there are people in my community who are tired of doing this, and who don’t want to do this, but as someone who’s been dealing with this crap for a long, long time, I feel like when I see someone struggling to educate themselves, I might as well tell them what to read and what petitions to sign.

I recently had a question and answer session on my Instagram, in which I encouraged people to submit their questions to me anonymously. The overall response to it was crazy—I thought I was going to just answer like five or six questions, but I ended up spending almost an hour answering questions on the Black Lives Matter movement, where we’re going from here, what does justice look like, and what dismantling the police force means. That was several days ago, and I still have people who are watching it and interacting with it and DMing me.