A Guide to Staging an Impactful Protest in Your Own City

Bring the fight for justice and equality to the suburbs with some help from experienced activists. 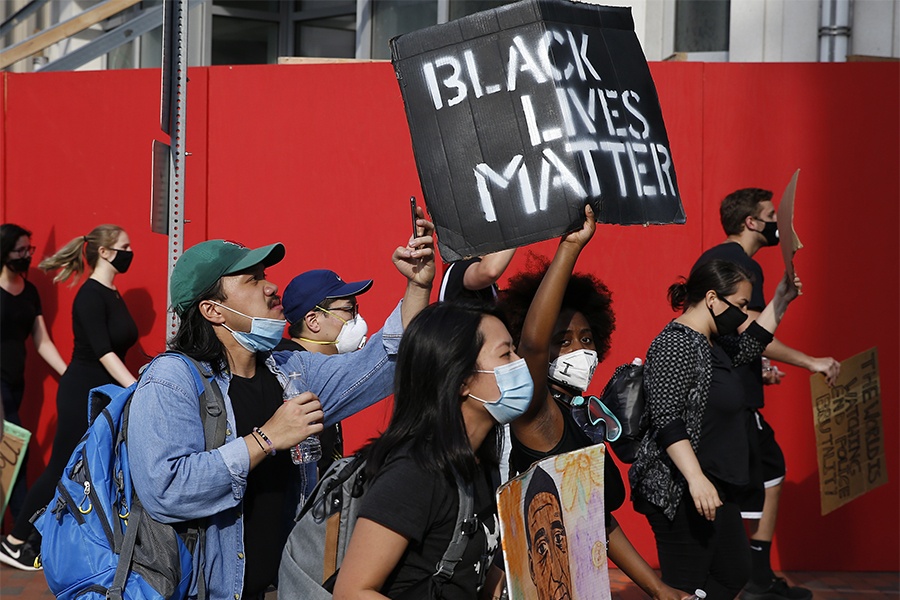 Protesters take to the street during a peaceful protest and march starting from Boston Common on June 3, 2020 to honor the life of George Floyd and other Black Americans killed by police. Photo by Jessica Rinaldi/The Boston Globe via Getty Images

While thousands of people have taken to the streets of Boston to protest police brutality against Black people, suburbanites have been taking notes. In recent days, protests have popped up in cities and towns like Andover, Scituate, and Swampscott. Residents have marched to their city halls to demand change. They’ve remained silent for 8 minutes and 46 seconds to honor George Floyd. And they’ve amplified Black voices. Although the events have been smaller in scale than those taking place in Franklin Park or Boston Common, they’re equally important. “If we want to completely abolish racism throughout the entire country, it comes down to what’s in all 50 states. It comes down to every county, every town, and every city. They all have to be on the same side,” says Brooklyn Manna, a graduating senior of Woburn Memorial High School who led her city’s rally. So, we’ve called upon local organizations and leaders to help create a guide to staging a successful protest in the suburbs.

And exercise them. “[It’s] a fundamental human right,” explains Cynthia Gabriel Walsh, senior director of organizing and activism for Amnesty International. “Everyone has the right to freedom of expression and to carry their opinion to the streets. People have the right to organize peaceful protests and demonstrate free from intimidation, unnecessary or excessive force, and the threat of prosecution and detention.” If a protester gets injured, that person also has a right to immediate medical assistance. And if someone’s rights are violated by the police or other law enforcement personnel, that person has the right to file a complaint, which “must be investigated fully, promptly and independently,” Gabriel Walsh explains.

Depending on your city or town, there may be different requirements for holding a peaceful protest. According to the American Civil Liberties Union, it is less likely that you’ll need a permit if you are marching on the sidewalk or street without obstructing cars or pedestrians. Larger protests that could interfere with traffic or call for a street closure are more likely to require a permit. “Do your research and be prepared,” Gabriel Walsh says. Sue Doherty, who organized a protest in Quincy, said she did not get a permit. Maggie Brown, who led a community walk in Wilmington, also said she did not get a permit. (Both Quincy and Wilmington closed streets for the protests.) And former city councilor Tito Jackson, who helped Monica Cannon-Grant organize a die-in within Boston, explained that while towns and cities have different permit rulings, they did not get a permit. “I don’t believe permission is required…if I want to be at a park with 500 of my closest friends,” Jackson says.

And if you don’t get the go-ahead from your city, stay persistent

If city officials withhold the permit, or put excessive restrictions on the protest—making someone wait 45 days to protest a timely event, only allowing the protest to happen at 2 a.m., or charging someone $15,000 in permitting fees, for example—that would “render the protest meaningless,” says Howard Cooper, a founding partner at Boston-based Todd & Weld who specializes in first amendment cases. “They immediately have the right to challenge the denial of the permit.” He recommends either calling a lawyer (who will write a complaint, get an affidavit, file the papers, and ask to see a judge immediately) or going down to the courthouse and filing a complaint yourself. Due to the circumstance, he says he’d expect a judge to see you that same day. A ruling may not be made until a day or so after if the judge orders you to give notice to the other party so that the other party can share their side of the story in court.

And for people who choose to protest without a permit and don’t bring their case to court, Cooper says, “As a lawyer, you cannot tell people, ‘I recommend that you violate the law.’ You can tell people, ‘I will agree to defend you for exercising your conscience. But you should understand you are at risk of arrest.’” So, if people protest, and the police tell them to disperse, “they are lawfully obligated to comply,” Cooper says. “They, of course, have the right not to be beaten and not to be abused. And people do have the right to say, ‘Arrest me. I’m not moving. You have to put your hands on my body and remove me.’ That is civil disobedience.”

And Violence in Boston founder Cannon-Grant reminds people, “Protesting is a legal act. From an activist perspective, a permit or [officials] telling you [what to do means] it’s no longer a protest or a resistance. You are now agreeing to the terms of the city you are living in. Protesting is supposed to be an act of resistance to something that’s not happening.”

Leading a protest may be more work than you initially thought, so gather a team. Consider asking someone to be the point of contact for the media and another for the police (that person will carry the protest permit, if required). You can also appoint “chanters” to lead the crowd. Both Doherty and Jackson suggest designating marshals to keep everyone organized. Selected people can stand at the back, on the sides, and within the group to watch for “unwanted and threatening behavior,” Gabriel Walsh says. “My advice is not to directly approach these people, but make sure this is communicated so precaution can be taken. If necessary, alert your police contact.”

Decide how you will protest

There are many ways to protest police brutality and racial inequality—marches, die-ins, silent vigils—so create a plan ahead of time. “Your protest needs to be active. If you want to do a die-in, fine. If you want to stand up and yell, that’s fine, too,” Cannon-Grant says. “There’s no right way to protest. Just do something.” Brown says she chose a walk to symbolize the Wilmington community coming together. As for the power of die-ins? “Lie down on the hot ground for 8 minutes and 46 seconds. You’ll see, feel, and connect with how long that knee was on George Floyd’s neck,” Jackson says. “But you’ll also connect with the ancestry of the Black experience in the United States of America and how long it’s been that a knee has been on [the Black] community’s neck.

Use social media platforms to recruit people. But don’t forget about how powerful word of mouth can be, says Cannon-Grant. You can also reach out to local organizations and ask them to help. Share details like the date, start and end time, location, and where to park; the message that your protest will be spreading; and ways to stay safe. Doherty, Manna, and Cannon-Grant all warn that you’re likely to receive negative backlash, but you should keep moving forward. And in terms of city and law enforcement officials, Gabriel Walsh says, “Organizers should try to meet with [them], when possible, so that clear communications are established and [to] be clear that the intent is to have a peaceful protest.”

Can you find someone to donate water? Do you have medical personnel that will attend the event? Don’t forget to encourage people to wear masks. And think about staging the event in a place, such as a park, that is easy to get in and out of. Gabriel Walsh also suggests that protesters write the phone numbers of legal aid organizations and emergency contacts on their forearms. “We want to ensure there’s no additional loss of life,” Jackson says. “We’ve lost too many thus far.”

If you’re not Black yourself, make sure you have invited Black members of the community to speak out, whether you designate a few specific speakers or open the mic to all Black people. Mike Semonelli, a theater teacher in Wilmington who spoke at his town’s event about systemic racism, stressed how important it is to give Black people a platform. “The Black community is so often underrepresented in these small communities that it seems like we don’t exist [here], when in fact, we just take up a much smaller populace. We don’t have neighborhoods like Roxbury in Wilmington,” he says. “You have to represent at every level.” When taking the microphone, Semonelli encourages people of color to speak from the heart. And if a white ally is participating in the speeches, he encourages that person to acknowledge their privilege, vow to use that for good, and promise to listen and educate themselves.

When the protest ends, keep the momentum going

Cannon-Grant suggests making posters and writing down the names of organizations that people can donate to when they go home. In Quincy, Doherty and her team made sheets with QR codes that led to a page for posting names and emails. She plans on inviting the people that entered their information to a group focused on fighting racial inequality. Semonelli also says that he plans to form a group in Wilmington. And just because you had one protest in your city, doesn’t mean that you can’t have another. And another one after that.

And remember, you’re never too young to stage a protest

Manna, who’s 18 years old, led the rally in Woburn. Desmond and Molly Sullivan, who are 20 and 19 years old respectively, led Scituate’s protest. Boston’s protests have also featured many youth activists. They’re all proof that you’re never too young to make a change. “One of the most important parts of this is the voice of our young people. Their voice, their urgency, their anger is relevant. It absolutely needs to be heard,” Jackson says. “Many of the aspects of today’s reality are based on what quote-unquote adults have done. [Most of the] solutions, the answers, and the innovation that we need will come from young people.”