Someone Beheaded the Christopher Columbus Statue in Boston…Again

It was only a matter of time before the controversial North End statue got swept up in the moment. 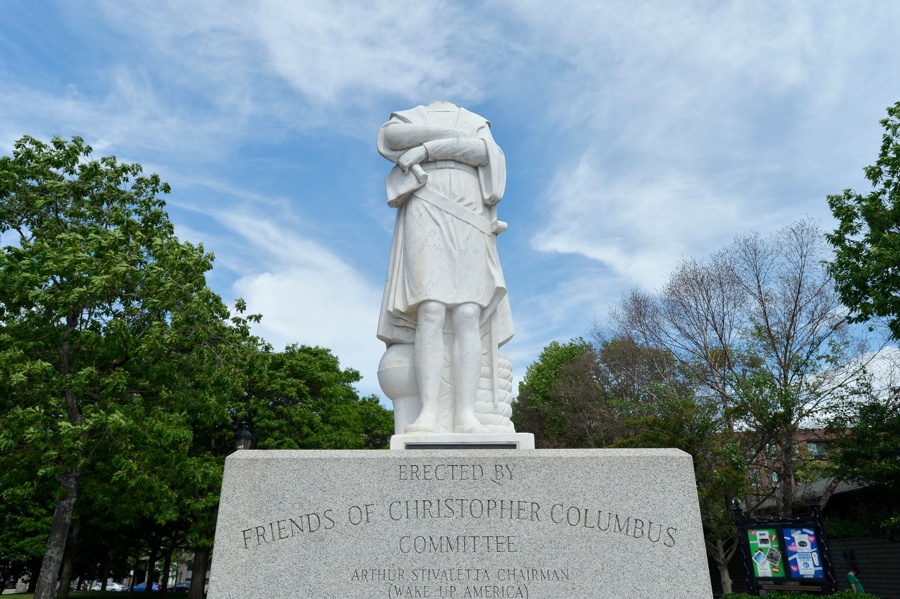 Once again, Christopher Columbus is headless.

As anti-racist protesters in cities around the world have taken their anger out on monuments to troubling historical figures, the 40-year-old marble statue honoring the 15th Century explorer, kidnapper, and genocidal maniac on the North End Waterfront has once again been defaced. Police say a report that Columbus had his head bonked off came in at around 12:30 a.m. Wednesday. The head was recovered nearby. An investigation is underway.

And in the meantime, Boston Mayor Marty Walsh says what’s left of the statue is slated to be removed from the park.

“Certainly we don’t condone any vandalism here in the city of Boston and that needs to stop,” Walsh said in his daily press briefing Wednesday. “We’re going to be taking the statue down this morning and putting it into storage to assess the damage to the statue.”

One could also be forgiven for getting the impression from the mayor that the statue might not return. “This particular statue has been subject to repeated vandalism here in Boston, and given the conversations that we’re certainly having right now in our city of Boston and throughout the country, we’re also going to take some time to assess the historic meaning of the statue,” he said in the briefing.

With all the talk about tearing down monuments to slaveowners and racists—one of many conversations ongoing amid an historic protest movement happening in cities around the world—it felt inevitable that soon there’d be a target on Christopher Columbus’ head. For years, Boston’s activist community has urged the city to do away with the monument, erected in 1979 as the centerpiece of the North End’s Christopher Columbus Park, alongside calls to rename both Yawkey Way (which the city did in 2018) and Faneuil Hall (which it did not), and remove a Confederate monument on a Boston Harbor Island (which was taken down without much debate in 2017).

The statue is a frequent target for vandals. Columbus’ head also came tumbling down in 2006, and went missing for nearly a week before it was recovered. That same year, the Boston Globe reported that the statue was targeted so frequently by vandals—spray painted, coated in lipstick, or otherwise mutilated—it sometimes cost thousands of dollars a year to repair it. In 2015, protesters soaked it in blood-red paint, and scrawled “BLACK LIVES MATTER” along its base. 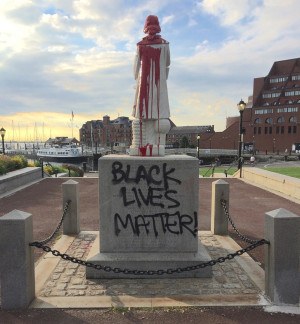 This latest act of vandalism comes as memorials are falling around the world. In some cases the statue-removers are elected officials: Last week, Philly Mayor Jim Kenney ordered the removal of a statue honoring its proudly racist ex-mayor Frank Rizzo. The list of Confederate monuments coming down in Southern cities grows longer by the day.

In other places, protesters have taken matters into their own hands, as in the viral video of protesters dumping a statue honoring a slave trader in a harbor in Bristol, UK.

Renewed calls for the statue’s removal had sprung up across social media in Boston recently, and then by Wednesday morning, it happened: Where there once stood the face of a serene-looking Columbus gazing over Boston Harbor, all that was left was a bare metal spike poking out of its torso.

The statue was spared the fate of another Columbus statue in Richmond, Virginia, which protesters spray painted, set on fire, and tossed in a lake last night.

An investigation into the vandalism is ongoing, but in the current climate, the police may not get too many tips from the public.