The co-host of the popular show, who also owned the Mendon Twin Drive-In, wrote a series of Facebook posts mocking recent protests against racial injustice. 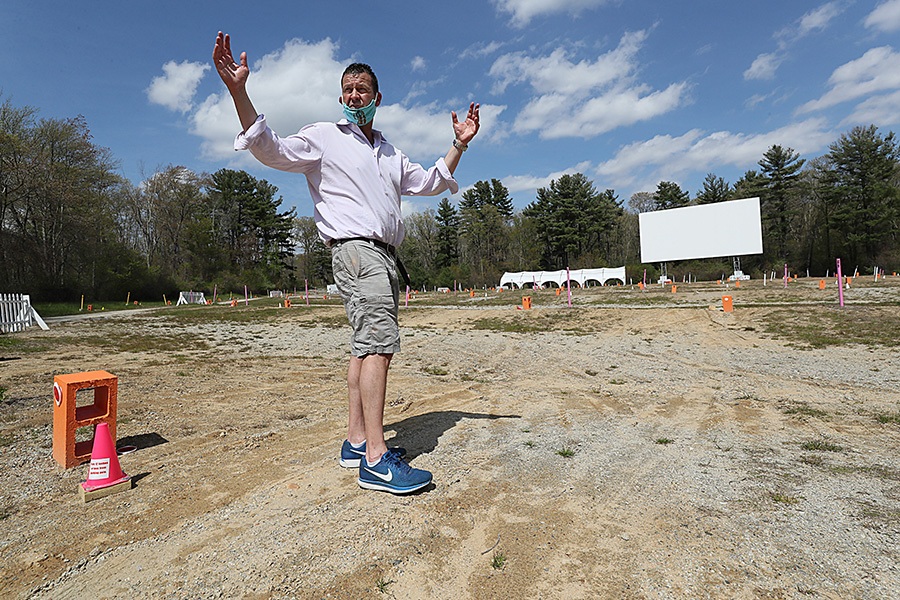 MENDON, MA – MAY 15: Dave Andelman, CEO of Phantom Gourmet, at the Mendon Twin Drive-In, which he also owns with his two brothers. (Photo by Suzanne Kreiter/The Boston Globe via Getty Images)

Update, 6/16 3:30 p.m.: Dave Andelman has resigned as CEO of Phantom Gourmet, effective immediately. Per a post on the Phantom Gourmet Facebook page, Andelman will no longer appear on episodes of the TV show, will not be involved in any day-to-day operations, and will relinquish his ownership in the company. He will also resign from the Mendon Twin Drive-In. Dan Andelman, who co-hosted the program with his brother Dave, will take over as CEO.

“I’m proud of the company my brother Dave helped build and for all our show has done on behalf of local restaurants and employees in the foodservice industry, especially during this challenging time,” Dan Andelman said in a statement. “But, Dave’s recent social media statements made it clear that he cannot stay in a leadership role or any role with this company. We are passionate about food and restaurants, but we also vow to dedicate ourselves to advancing the causes of diversity, social justice, and equality. We plan to listen, learn, and act, while we also continue to entertain and inform our loyal food and fun loving fans.”

In addition to the leadership change, Phantom Gourmet has announced its commitment to further measures to promote diversity and inclusivity, including prioritizing finding and promoting Black-owned restaurants, promoting diversity and inclusion training for all employees, and completing a “stem to stern review of company policies and corporate culture to make sure controls are in place so nothing like this ever happens again.”

After Phantom Gourmet’s CEO and co-host Dave Andelman penned a series of Facebook posts mocking the ongoing protests against police brutality and systemic racism, the decades-old food and dining show has been placed “on hiatus pending further review,” according to a statement from WBZ-TV and WSBK.

The move came just days after screenshots of Andelman’s posts began making the rounds on social media. A Facebook user by the name of Benjamin Lipiecki shared a collage of screenshots of posts that Andelman had written over the course of 10 days, according to their time stamps. Andelman has since made his account private. While the posts attack the recent Black Lives Matter protests and vigils in a variety of ways, Andelman seemed to be particularly fixated on looting, protesters’ requests that police at demonstrations take a knee, and recent calls to defund the police.

“If the people who fought to create and defend this country knew politicians and police were ‘taking a knee’ after looting in major cities, while millions of law abiding citizens were denied the right to make a living, they’d jam bayonets into their own heads,” reads one post.

“Defund potatoes, not police,” reads another.

The social media backlash, toward both Andelman and WBZ, was swift.

@wbz I won’t be watching your station again. I love your news and other programming. But cannot stand by while #PhantomGourmet Dave Andelman spews his racist views.

In my head, I’m a certified foodie so watching Phantom Gourmet is a must-watch if you wanna know about good food in New England. However.. he blew it LMAOOOO

@daveandelman I see you’ve gone private now. We saw your true colors and we won’t stop until @PhantomGourmet is worthless. You’re going to face consequences for being part of the problem with #racism and #PoliceBrutality. You’re just a #racist and there’s no room for you anymore

Thank you to everyone bringing Dave Andelman posts to our attention. We do not follow his page on Facebook and were unaware of his posts until now. We do not support any acts of racism, cruelty, intolerance, or injustice and have terminated our relationship with Phantom Gourmet.

Saturday, Andelman issued an apology on the Phantom Gourmet’s Facebook page, in which he called the numerous posts—again, made repeatedly over the course of 10 days—a “mistake.”

“I made a mistake. I apologize. I feel terrible. We all make mistakes,” he wrote.

Less than 24 hours later, the Phantom Gourmet Facebook page seemed to be attempting to make a return to normal, posting a photo of fried clams and a lobster roll. Lipiecki alleges in a new Facebook post of his own that the managers of the Phantom Gourmet page are deleting negative comments on the post and blocking the people who post them.

This isn’t the first time that the three Andelman brothers, who are all involved in the Phantom Gourmet empire and also co-own the popular Mendon Twin Drive-In movie theater, have been swept up in controversy. In 2011, Mike Andelman made headlines after an appearance on the Phantom Gourmet radio show in which he called a hostess who refused to seat him early at Grill 23 “a little monkey” and added that restaurant hostesses are often attractive because “they’re incompetent and can’t do anything else in life.”

In the statement announcing that the show, which has been broadcast since the early ’90s, would be be placed on hiatus, WBZ-TV president and general manager Mark Lund wrote that the station is “committed to our community, by working together, listening to one another, and supporting each other.” The show’s fate will be determined after “further review,” Lund writes.