Something New to Worry About: Really Big Jellyfish Have Been Spotted at Mass. Beaches

The Lion's Mane jellyfish is the largest known species of jelly. 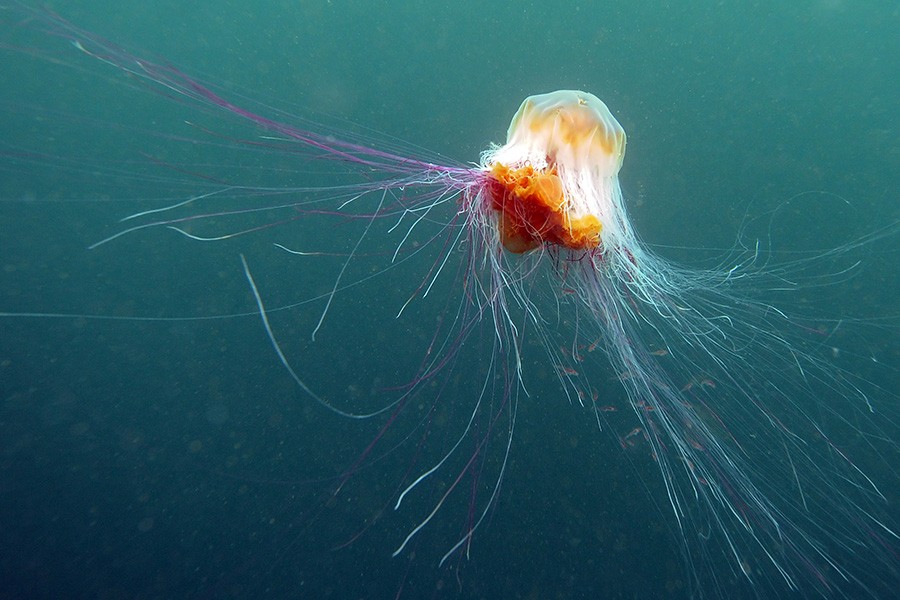 A Lion’s Mane jellyfish swims beneath the waters of Inner Farne on June 24, 2011 at the Farne Islands, England. (Photo by Dan Kitwood/Getty Images)

Thinking you’ll take advantage of the summery temps this weekend and head to the beach? Sounds relaxing! Just remember, as you dodge the crowds, seek out a socially distanced spot on the sand, and slather on sunscreen so you don’t get a face mask tan: Stay on the lookout for big jellyfish.

The Lion’s Mane jellyfish, the largest known species of jellyfish in the world, has been sighted around several Massachusetts coastal towns, including in Duxbury, near Nahant Beach, off of Fisherman’s and Eisman’s Beaches in Swampscott, and in Hingham Harbor, where one resident has already been stung. The jellies spotted in Hingham had bodies ranging from eight inches to two feet in diameter, the harbormaster said.

“BE ADVISED: We are seeing a large amount of Lion’s Mane Jellyfish in the water, both ocean and bay and some are washing up,” Duxbury police wrote in a tweet Wednesday. “DO NOT TOUCH THEM. If you happen to come in contact with one please alert a lifeguard or a Beach Ranger.”

Lion’s Mane jellyfish are some of the longest animals on the planet, Peter Gawne, an assistant curator at the New England Aquarium, told the Boston Globe. Their bodies alone can grow to be as wide as 8 feet, and their tentacles can grow to nearly 90 feet—as long as a blue whale. While Lion’s Manes are a common sight in New England, they tend to be much smaller than this, with heads typically between 4 and 18 inches long.

That is, until now.

“Over the last couple of years, the lion’s mane jellyfish have been getting startlingly large,” biologist Nick Record told NBC10 Boston. At the end of May, a family from Peak’s Island, Maine got in contact with Record to share photos of of a nearly 5-foot wide Lion’s Mane that had washed up on Centennial Beach. “We put three of our kids next to it, and it was still bigger than all three of our kids,” Danielle Ivers told NBC.

Record said on Twitter that he only received one report of a jellyfish of this size last year, but by the end of May this year, he had already been informed of several. Record told NBC10 that researchers aren’t sure why the jellyfish are growing, but noted that the size of the species has fluctuated over the years.

Imagine jumping in the ocean and seeing a 5 foot lion’s mane jellyfish causally swimming by 😳🤯😬.

Danielle Callow-Ivers sent me these pictures taken on Peaks Island in Maine.

The jellyfish reports are coming in, as always. The lion’s mane jellies are big again this year. Here’s one from Revere Beach, north of Boston. (More images coming when I get a minute.) #jellies pic.twitter.com/4Dn30OFNWK

Here’s another, this time Falmouth, three days ago. The person is not touching it. (Don’t touch them–they sting!) pic.twitter.com/3Zi3E6qWXU

Another massive lion’s mane jellyfish from Plymouth MA. Reports have slowed, but continue to come in. Don’t get stung! pic.twitter.com/RD1W1cFjwa

The thought of coming face-to-face with one of those blobby creatures in the water is truly the stuff of nightmares—but that doesn’t necessarily mean you have to cancel your beach plans. Stings from Lion’s Manes can be very painful, and they can trigger allergic reactions in certain people, but they aren’t typically fatal. Per the Hingham Police Department, the Hingham resident who was stung “experienced something similar to a brief electric shock followed by a stinging sensation,” but fortunately did not require medical attention beyond a jellyfish sting kit and some vinegar. It begs the question: Is spending a day in the sun worth the risk of encountering a big, scary jellyfish? At this point in quarantine, we wouldn’t blame you for saying yes.