What’s a Summer without Provincetown?

The Cape Cod town, long an oasis for the LGBTQ community, is going to have a very different summer season. 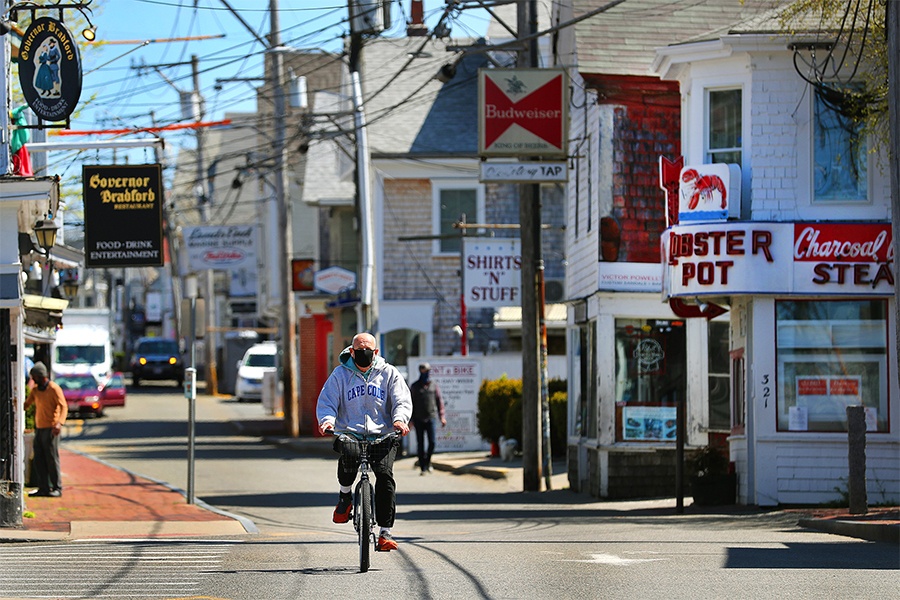 My insatiable desire to spend summer weekends in Provincetown on a journalist’s budget is best explained by my long history of desperate sleeping accommodations. I’ve slept on couches, cramped hotel room floors, and many uncomfortable twin beds with friends. I have also spent a night under the famous “Dick Dock,” and like most of the best Ptown stories, my experiences there are not fit to print.

It’s a place like no other. Even for a gay 20-something who’s spent his entire life in progressive Boston, there’s something uniquely enthralling about venturing onto the sweltering dance floor during your first trip to the A-House bar. Yes, our Boston bubble affords us the luxury of comfortably dining out in the city, and being able to blissfully hold hands with our partners as we stroll along Boylston Street. But it is a special feeling—an intoxicating feeling—to be in a place where your identity is not just incidental, but celebrated. I don’t want to merely “fit in” amongst a crowd of bros in slim-fit dress shirts and tasteful khakis. I want to go to Purgatory and dance in nothing but my jock strap. As comedian and Ptown legend Lea DeLaria put it to me: “You just want to be with your own sometimes, and there’s nothing like going to fucking Tea Dance.”

Like so many summertime traditions this year, Tea Dance, a raucous daily sunset party that packs the deck of the Boatslip Resort, is not going to happen, and Provincetown is going to look very different. Under normal circumstances, it’s one of the premier LGBTQ vacation destinations in the country, and during beach season, its population swells from 3,000 people to 65,000. But in step with other major resort towns, Provincetown has canceled all town-sponsored events through the end of the year due to the coronavirus, and the economic impact will almost certainly be immense. The town generates more than $200 million in tourism revenue annually, the vast majority of which comes during the roughly 10-week summer season.

While this sad story is playing out in beach destinations from coast-to-coast, a summer without Bear Week, Women’s Week, or Carnival on the Cape is uniquely devastating. These theme weeks encourage individuality, and for many people, these events serve as the only occasions they can truly feel comfortable embracing their identities. “It’s the most tolerant town in the world,” says Anger Management director Bob Koherr, who started coming to Ptown as a young adult before purchasing a home there. “You’ve got German tourists eating salt water taffy while getting their picture taken with a Cher look alike on Commercial Street. It’s a huge wonderful experiment in acceptance and tolerance.”

That was never clearer than at the height of the U.S. AIDS epidemic, when Provincetown served as a refuge for gay men ravaged by the deadly disease. In fact, the town became so well-known as a sanctuary that a Colorado man dying of HIV-related complications in 1982 drove all the way to Massachusetts to receive treatment for the virus, and afterwards, lived out his final days in Provincetown with residents who took him in. The following year, the Provincetown AIDS Support Group was formed, and the town began offering support groups as well.

During the first 15 years of the crisis, 10 percent of the town’s year-end population died. The epidemic devastated Provincetown, but for many years it remained one of the few places where landlords weren’t afraid to rent to the sick. Ptown transformed into an oasis during a horrific time, and the era cemented the eastern-most town on the Cape as a place where the gay community could find safe harbor together. “To be down in Provincetown in the 1980s, and being able to walk down Commercial Street holding (your) lover’s hand openly, I get goosebumps just talking about it now,” says NBC Boston and WGBH commentator Sue O’Connell. “It really was an oasis.”

DeLaria, the first openly gay comic to appear on a television in America, where she proudly called herself a “dyke” on The Arsenio Hall Show in 1993, says Ptown has always been on the political cutting edge. A self-professed “queer warrior,” DeLaria was furious throughout the ’80s at the Regan administration’s callous response to the AIDS epidemic, as well as the American public, which just didn’t seem to care. She started performing in Provincetown in 1984, and at the time, it was the only place where the Orange Is the New Black star and other openly LGBTQ entertainers could get regular work.

Today, Provincetown no longer has the same iconoclastic feel. Wealthy gays have infiltrated the town, where now 70 percent of residents are second-home owners. A real-estate boom has pit well-heeled urbanites against the artists and dissenters, whose irreverence and glorious weirdness have always set the tone for Ptown. And while the median household income in Provincetown has declined to roughly $42,000—a drop of more than 10 percent from 2000-2016—a person needs an annual income of $120,040 to afford a median-priced house, according to a UMass Dartmouth study.

Still, thankfully the high-priced condos have not expunged all of Ptown’s quirks—at least not yet. There are still street-side artists, drag queens, and plenty of big old queens, too. Take it from this twunk: Provincetown remains the most liberating place on earth. The Provincetown Inn Pool, for instance, is the only place where I will allow my translucent hairy thighs to hang out of a speedo—and still feel slightly overdressed.

Preserving that unique spirit will mean helping Ptown weather the current crisis. Koherr, who recalls feeling like Godzilla conquering Tokyo when he first started coming to Ptown as a young man, says he feels a responsibility to do what he can this summer to keep the town’s spirit alive—and hopes others of able means and health follow suit. “It’s still really special, it’s still magical,” he says. “We just have to step off the dance floor for one year and have a different experience in the town.”

I, for one, will be ready to embrace that so-called different experience when I head down to Provincetown with some friends for a Fourth of July—sans fireworks. I am keeping my reservation for Carnival, too, and plan to sport my finest Holidays-themed face mask down Commercial Street. How, after all, could I do any less for the place that played host to so many moments on my journey to becoming a fully out and confident gay man.

One of the many tragedies of the summer of 2020 is that the coronavirus pandemic will rob thousands of young LGBTQ people of exactly those sudden and euphoric coming of age moments. But I’m not giving up hope. Ptown will endure—the magic of the spot is among the strongest, most intangible forces on earth. And fortunately for visitors, all that’s required to experience that magic is opening your eyes. “It’s just beautiful,” DeLaria says. “It’s like no place I’ve ever seen.”