A petition calling for the statue's removal garnered over 12,000 signatures in just three weeks. 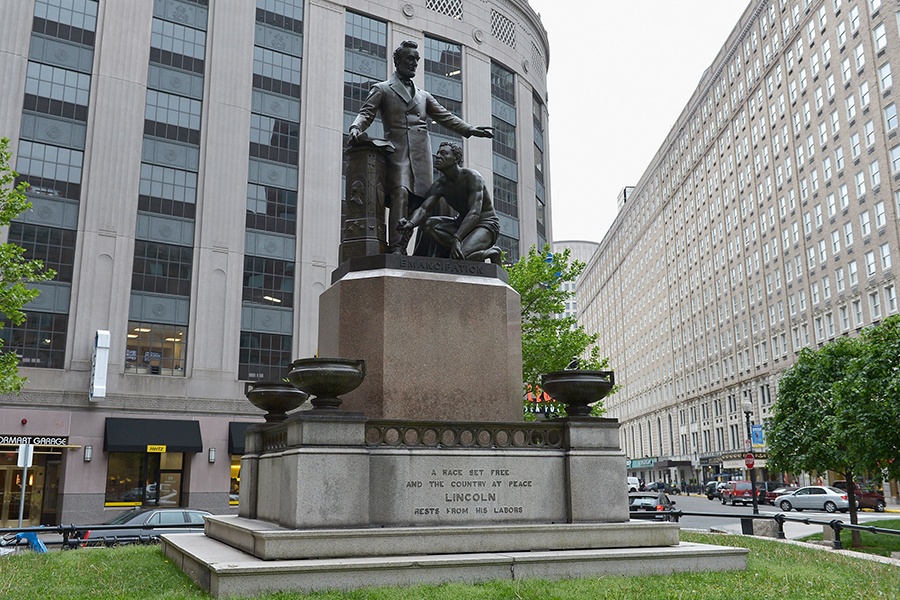 A general view of the Emancipation Statue in Park Square with Abraham Lincoln on May 21, 2013. Photo by Paul Marotta/Getty Images

Seven score and one year ago (that is, in 1879), a statue depicting Abraham Lincoln standing over an enslaved man was installed in downtown Boston’s Park Square—and yesterday, the Boston Art Commission voted unanimously to take it down.

“After engaging in a public process, it’s clear that residents and visitors to Boston have been uncomfortable with this statue, and its reductive representation of the Black man’s role in the abolitionist movement,” Mayor Walsh said in a press release about the BAC’s vote. “I fully support the Boston Art Commission’s decision for removal and thank them for their work.”

The statue, called The Emancipation Group or The Emancipation Memorial, was a gift to the city by Moses Kimball, a local politician. It is a copy of a statue, created by Boston artist Thomas Ball, that still stands in Washington D.C.’s Lincoln Park. The Boston sculpture has been criticized for years due to its racist depiction of Lincoln looming over a crouching Archer Alexander. The statue depicts the 16th president with his right hand resting on the Emancipation Proclamation and his left hand raised benevolently over a kneeling, half-naked Alexander, a Black man who assisted the Union Army, escaped slavery, and was recaptured under the Fugitive Slave Act. The inscription on the monument reads, “A race set free/ and the country at peace / Lincoln / Rests from his labors.”

Bullock also launched a petition calling for the removal of the statue that garnered over 12,000 signatures. Shortly thereafter, the City of Boston launched an online survey encouraging the public to share their input on The Emancipation Group, which received 645 responses. The BAC then held two special meetings to hear public testimony. Tuesday, the commissioners voted unanimously to remove the statue’s “bronze figurative elements.”

In a message to Boston, Bullock said he is “beyond happy” with the BAC’s decision. “This road was not easy,” Bullock said. “I applaud the Commission for not just agreeing to remove the statue, but for creating a space for the city to share how they feel about it. Process is important, and Boston created a process for the rest of the country to use as a blueprint. I’m proud of my city today.”

The date for the removal has not yet been set, but the BAC plans to resume conversation about the statue at its July 14 meeting. When the statue is taken down, an art conservator will oversee the removal process and its placement into temporary storage, and detailed documentation of the work, its history, and the process the BAC took to reach this decision will be placed into the group’s archives. The Commission also intends to create a public event that acknowledges the statue’s history and informs the public, create temporary signage to interpret the statue before its removal and permanent signage after its removal, and and begin a process to determine “how to re-contextualize the existing statue in a new publicly accessible setting.”

“Public art is storytelling at the street level. As such, the imagery should strike the heart and engage the mind,” Ekua Holmes, Vice-Chair of the BAC, said in a statement. “What I heard today is that it hurts to look at this piece, and in the Boston landscape, we should not have works that bring shame to any groups of people.”