Why Is Baker Worrying about Those (Clearly Fake) “COVID-19 Parties”?

A wild rumor from Tuscaloosa made it all the way to the Bay State. 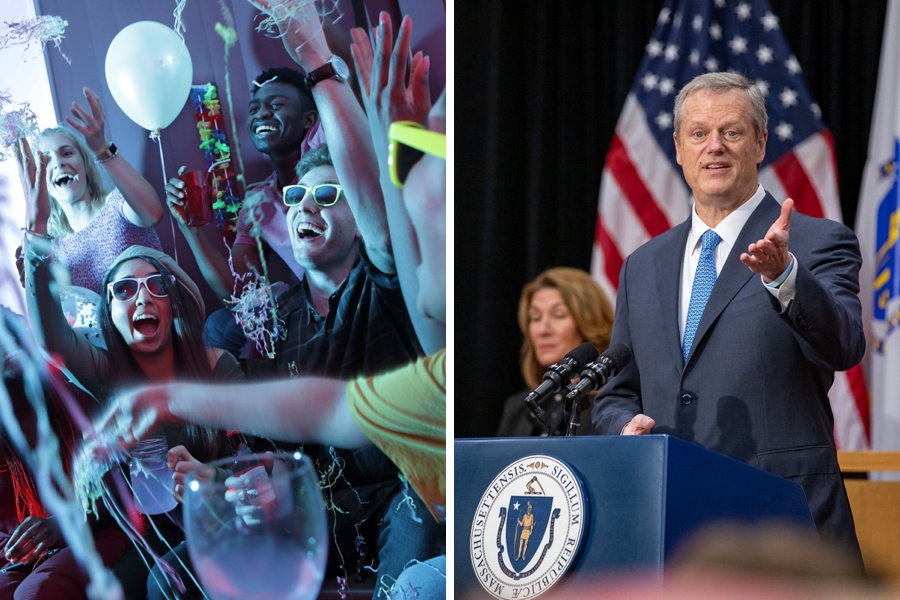 Gov. Charlie Baker has earned plaudits for effectively communicating the gravity of the situation we’re living through, and unlike so many of his fellow Republican governors, has never wavered on the importance of mask-wearing, hand-washing, and social distancing. His teary speeches about not visiting his elderly father were heart-wrenching, and effective. Critics may disagree with the moves to reopen indoor dining rooms and gyms, and they have, but the fact that so many people in Massachusetts listened to his sober and clear-headed analysis of the pandemic so attentively the past four months is paying dividends: While other states are plunging into catastrophe, the state is in comparatively good shape, case-wise.

So it was very much out of character late last week when a tweet from the governor lent credence to a, uh, suspect news item floating around the most demented corners of Facebook and, apparently, in major news outlets like the Associated Press. A few days ago Baker shared a link to a story out of Alabama about rumors that 20-somethings in the state were breaking social distancing rules in a stupefying fashion. Young people, the story went, were throwing large parties to knowingly infect one another with coronavirus, betting on who would come down with COVID-19 first.

The governor was aghast.

“If this is actually true,” he wrote, linking to a post on the website of a Philadelphia ABC affiliate, “I cannot express how incredibly selfish and foolish this is.”

If this is actually true, I cannot express how incredibly selfish and foolish this is. https://t.co/gsY8XQJKoV

It should surprise no one that this macabre urban legend is easily debunked. For one, there are no documented cases of it happening. And like so many versions of this particular type of story, which affirm people’s worst suspicions about a given distrusted group—millennials, Gen Z, antiracist protesters, you name it—with zero evidence, it was sourced to a more or less random public official. In this case, it was a Tuscaloosa City Council member, who apparently heard the disturbing rumor from the local Fire Department, shared it during a public meeting, and accidentally touched off national news coverage. Alabama health officials have since had to step in to say there’s no evidence such a thing occurred.

We’ve seen this type of misinformation spread online a million times at this point, including in Massachusetts. Back when the state was gripped by a terrifying kidnapping case, internet sleuths shared a story sourced to a friend-of-a-friend in law enforcement that ride-share drivers were operating a “human trafficking ring” out of Cambridge. CPD was so overwhelmed by calls that it had to issue an official statement dispelling the rumors. Give people a serious issue worthy of their attention and concern, and they’ll inevitably invent something unrelated to get all worked up about.

To be sure, there are plenty of real-life cases of monstrous recklessness in large gatherings around the country. In one fully confirmed case out of New York state, a woman who threw a house party while exhibiting symptoms managed to expose dozens of guests to the virus (and now people who attended are facing fines for refusing to cooperate with contact tracers). Oxford gym-owner David Blondin famously refused to close his business even at the height of the pandemic. Thousands of people have turned up for Trump rallies amid COVID case spikes, including on the 4th of July, while brazenly refusing to wear masks.

But the case of the death-wish young people throwing coronavirus mixers had no evidence to support all the breathless coverage. Of course, this is just the kind of thing that happens when people are genuinely scared and suspicious of one another, and have access to the internet. But the fact that it made its way all the way to the corner office at the State House is cause for concern. And at a time when the state is gingerly reopening potential super-spreader venues like gyms and casinos, it makes you wonder if the governor has his eye fully on the ball.

As Wired‘s Gilad Edelman put it in a thorough debunking of the COVID party media craze last week: “It might be tempting to blame the pandemic on imagined people who are getting sick on purpose, but responsibility for the mess we’re in starts at the top.” Baker can justly point to the state’s success in battling the epidemic, but tsk tsking at mythological teenagers in Tuscaloosa won’t resolve other states’ issues, and if rates start to rise in Massachusetts again, it won’t be because of them either.