Would You Take Weekly COVID Tests to Go to College?

That's what the students at some of Boston's top schools may need to do come fall. 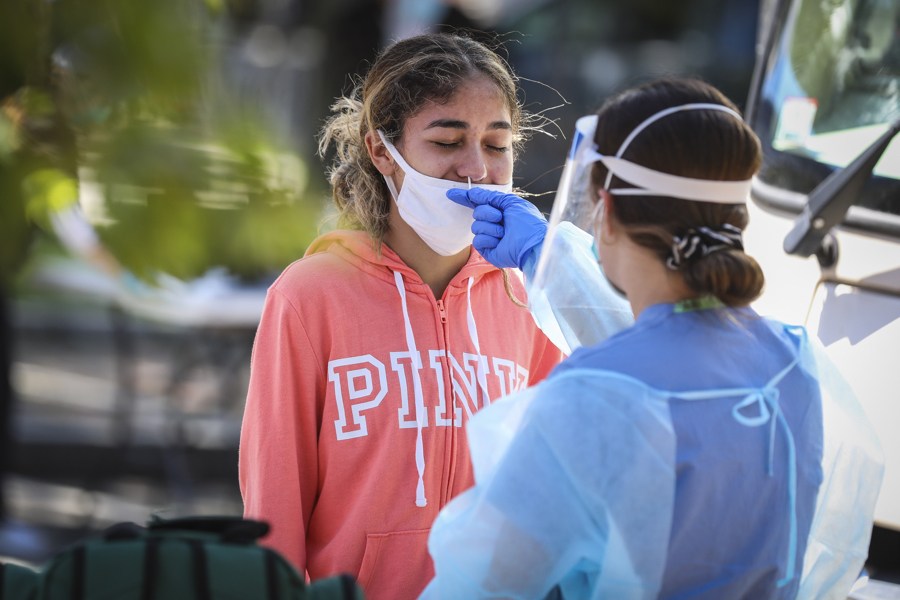 CHELSEA – JULY 15: An RN administers a COVID-19 test at a free testing site in Chelsea, MA on July 15, 2020. Even as the official COVID-19 case count goes down in Chelsea, one of the hardest-hit cities in Massachusetts, the economic fallout continues unabated. Coronavirus cases continue to to be steady, food lines remain long and rental relief is desperately needed. (Photo by Erin Clark/The Boston Globe via Getty Images)

Just picture it: You’re a bright-eyed college freshman, showing up at one of the Boston area’s elite academic institutions and enjoying the enormous boost at the beginning of adult life that comes with it all. You’ve got a historic dorm to crash in, smart and motivated peers to mingle with, and all those rarified resources at your disposal.

Oh, and by the way, twice a week someone has to jam a cotton swab into your brain.

That’s more or less the situation awaiting college students this fall when they show up at some of the region’s top colleges, which have begun releasing in-depth plans for starting class in the COVID era. Those plans could even require students and staff to be tested as often as twice a week. (See: Tufts University.) To be fair, this might make a lot of sense when you have folks from all around the country living together in close quarters.

According to Harvard University’s protocols, which were shared publicly last month, the college will allow up to 40 percent of students to return in the fall, all of whom will need to be tested on arrival for the virus; they’ll be urged to get weekly follow-up tests for as long as they’re on campus. Now other Boston-area colleges have followed suit, announcing their own plans and requirements.

How exactly it’s possible to screen tens of thousands of students a week at a time when testing capacity is limited nationwide has become a little more clear this week. According to a report in the Globe, Harvard, Wellesley, Emerson, and Clark will send tests to the Harvard- and MIT-aligned Broad Institute, which has said it can ramp up its per-day testing to 100,000 if need be.

It’s not clear what kind of test most students will end up taking most of the time. Generally speaking, in order to get tested most people have had to visit heavily gowned test-takers, who stick long, probing swabs deep into a person’s nasal cavity for several seconds. But there are less invasive options now available, including tests with shorter and less painful swabs, some of which allow people to swab their own noses.

At Harvard, according to its online resources, students and staff will be urged to make weekly visits to two specially designated sites for the tests—one in Longwood, and one in Allston—the results of which will be tracked on a website. There are plans underway for “unobserved, self-collected testing” at some point in the future. Boston University, which will also enact university-wide testing, says it will process self-administered spit or nasal tests at an on-campus lab, aided by “specialized robots.” Tufts, which has already set up modular housing for anyone who tests positive and needs to quarantine, will firmly require students to take two tests a week.

Properly screening yourself for a deadly virus is definitely not a typical concern for underclassmen, but these are not typical times. And frankly, they should be so lucky to have such easy access to tests. Outside academia, it’s still not easy for everyone to get them, and the comfort of knowing definitively whether or not you’re infected surely outweighs the discomfort of being nasally probed.

And hey, big picture: If they thought near-constant nose-swabbing was a pain, just wait until those student loans hit.