Lansdowne Street will belong to pedestrians and patios on game days, while Cambridge is putting an amphitheater in a parking lot. 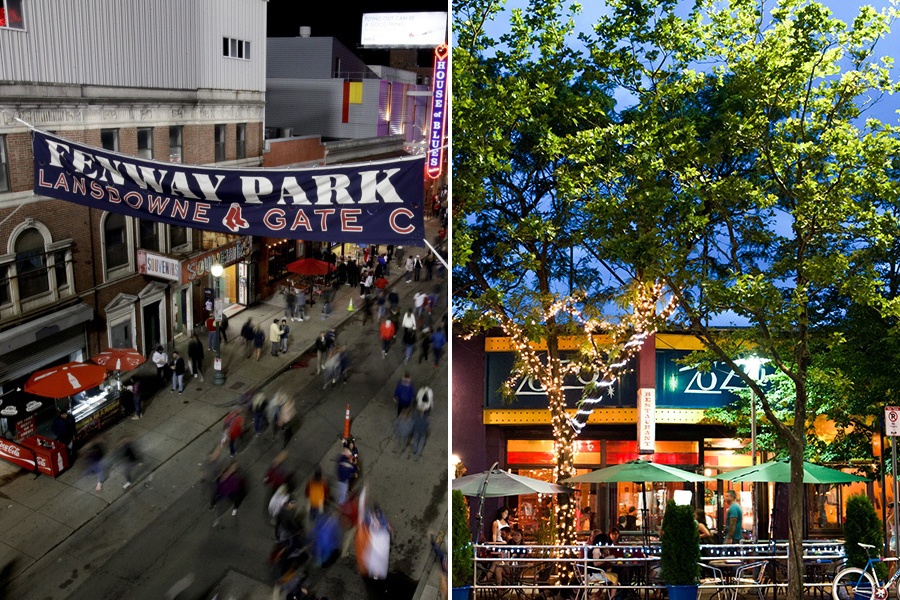 Yes, vacations have been canceled, concerts are postponed, and the only fireworks we heard this year were the contraband ones set off by our bored neighbors—but you can’t call this summer a wash yet. Now that reopening has gradually begun and key COVID metrics have remained steady (for now), innovators across the city are dreaming up creative ways to draw Bostonians out of their living rooms and back into the neighborhoods we frequented before the coronavirus turned this summer upside down.

For instance, while fans won’t be able to sit in the stands at Fenway and watch the Red Sox play this summer, the businesses of neighboring Lansdowne Street are hoping baseball lovers will still flock to the area to watch games from just outside stadium gates. Beginning July 24, Lansdowne will take a cue from the North End’s Hanover Street and shut down to car traffic during Red Sox games. We know what you’re thinking: Driving down Lansdowne during a game and dodging jersey-clad, Sam-Adams-addled Sox fans is a feat few attempted anyway.

But wait! The official closure of the road comes with some serious perks. Restaurants like the Lansdowne Pub and Loretta’s Last Call, which, per reporting in the Boston Herald, have been doing just 15-20 percent of their usual business since the coronavirus shutdown, will now be allowed to extend their patios into the street. You can expect some appropriate menu additions, too, like “Hall of Fame” pies named after baseball players, according to the Boston Globe. Plus, a pop-up patio beneath the Green Monster (called, aptly, Under the Green Monster) will appear on game days, featuring beer, seltzer, and cocktails.

Organizers are also currently working with the city to get approval for giant LED screens to broadcast games just outside Fenway’s walls. A lucky few, however, can still catch a glimpse of the game IRL—from the socially-distanced indoor tables at Bleacher Bar, where fans can experience the bar’s famous floor-to-ceiling view onto the outfield.

“The timing couldn’t have been worse for us, but we’re really trying to be positive and do some fun things,” Ryan Jones of Lyons Group, which owns many of the establishments around Fenway, told the Herald.

Across the Charles River, meanwhile, organizers at the Central Square Business Improvement District are also attempting to make the most of the summer of social distancing. Cambridge Day reports that the Square’s Municipal Parking Lot #5 (located behind Revolutionary Clinics and H-Mart) officially closed for public parking this week, making way for a brand-new project—a temporary center for the arts, dining, community gathering, and live performances.

Dubbed “Starlight Square,” the concept, which will remain in place from August to October, will be constructed out of scaffolding and scrim, creating separate spaces for programming and outdoor dining, with plenty of open wall space to display art. The centerpiece of the project will be a 150-seat amphitheater, hosting live performances Wednesday through Sunday nights. Partners in the project include the Central Square Theatre, the Dance Complex, and Improv Boston.

“This intervention turns this parking lot into a temporary space for worship, commerce, dining, community programming, and safe, shared experiences,” Central Square BID’s executive director, Michael Monestime, says in a video introducing the project on Patronicity. “We believe now is the time to use public space, free and accessible for all, for community healing.”

So, whether you’d rather be watching triple plays or triple pirouettes in these upcoming months, here’s your chance to finally shake up your nightly routines of alternating Zoom happy hours, evening strolls, and Netflix movies. We’ll take any chance to liven up pandemic-era evenings with some safe, socially-distanced fun. Here’s hoping that similar plans can transform other public spaces throughout the city—and that the weather cooperates, too.