Crowdfunding Can Save Boston’s Beloved Businesses—Until It Can’t

What the failure of Great Scott's investment campaign says about the future of Boston dives. 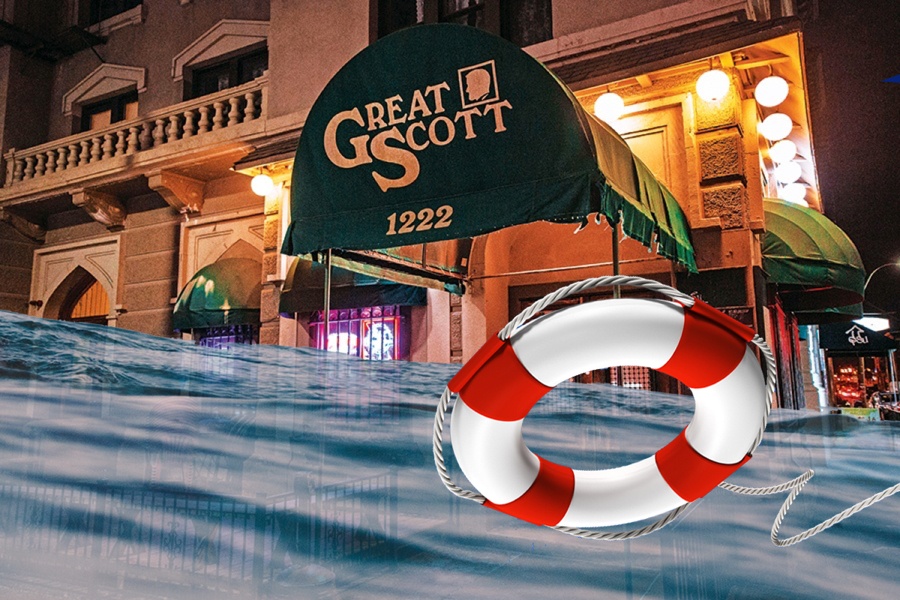 It was like something out of an inspiring movie: Historic Allston rock club Great Scott, like so many small businesses during the pandemic, was out of money and on the brink of extinction. No longer able to pay its rent without any money coming in, and with a landlord eager to land a tenant that could, it looked to be the end of the line. But then a ragtag group of more than 500 fans put their money together, and in more or less DIY-fashion raised nearly $200,000 for the cause in a matter of days—enough, backers thought, to fix up the bar, appease the landlord, and, when the world was normal again, keep the live music going at one of Boston’s smallest and most idiosyncratic venues.

The bid gave me hope. Somehow, a place with historical significance to the local music scene and ranked among the top American venues had managed to fight two powerful Boston foes at once—the COVID-caused economic crisis and the ongoing replacement of beloved, grittier spots with polished, upscale establishments—and apparently win. After seeing the success of Great Scott, I let myself believe that maybe, if enough people banded together to invest in the best and most authentic parts of Boston during this time of extreme need, they could keep their beloved gems from being scrubbed out all at once. But it wasn’t meant to be: Late last month, according to Carl Lavin, the club’s former booking manager who led the crowdfunding effort, Brookline-based landlord Oak Hill Properties revealed that, fundraiser or no fundraiser, it was not going to give Great Scott a second act, or another lease, after all. It had found and officially entered negotiations with a new prospective tenant on firmer financial footing than the rock club (it’s rumored to be a corporate chain convenience store, although when asked, Oak Hill declined to comment), and that, Lavin says, was that.

The news landed around town with a thud, and to my mind, raised an important question about the future of Boston, a place that even pre-virus was struggling to maintain its favorite dives and homegrown businesses, which together form the fabric of the city and keep it from becoming identical to every other major metropolis: Is there anything we can do to help endangered Boston institutions stay alive during the pandemic, even if we’re willing to put our money where our hearts are?

For a fleeting moment, Lavin felt optimistic about the future. After all, a petition to keep the venue alive garnered 25,000 signatures from across the country, hundreds more sent in handwritten letters, and nearly every media outlet in town waxed mournfully about the place. Lavin figured all he and his supporters really needed was a successful round of investment and Great Scott was good to go—what more could a landlord want than a sack of cash and cold hard proof that there were throngs of loyal paying customers waiting to walk through the doors? “When I launched [the crowdfunding campaign], I thought I was going to be doing everything I could to make it easy for Oak Hill to say yes, while also making it hard for them to say no. But it turns out it wasn’t hard for them to say no,” he says. “They were going do what they were going do no matter what the community had to say. They never cared.”

Oak Hill sees things differently. In a statement sent through its lawyer, the company insists it was not out to get Great Scott and would have been happy to keep the venue as its tenant but for the financials that just wouldn’t work. Music venues are not permitted to hold events until Phase Four of the state’s reopening, which could still be months away, given that it’s tied to the development of a vaccine or better treatments. And Lavin, the landlord stated, could not satisfactorily demonstrate an ability to reliably pay the $17,000 monthly rent during a pandemic with no end in sight, or account for the $400,000 it would cost to buy the liquor license from the club’s prior owner. “We were always very clear that we viewed Mr. Lavin’s endeavor with some skepticism simply because the [previous] owner of Great Scott had literally just closed the business because it was not economically viable,” the company stated in an email, adding, “The idea that Oak Hill was simply unwilling to rent to a music venue is demonstrably false.”

In other words, the $200,000 raised on Mainvest was a lot of money, but at least in this case, it still wasn’t enough. Here’s how these campaigns are supposed to work: A business with a loyal customer base needs money for some reason—say, to buy new equipment or a delivery truck—and turns to its customers for help. Patrons are offered the chance to make a small investment (in Great Scott’s case, of as little as $100), and in return receive a share of the revenue, with interest, until the investment is paid back in a few years­­­­­­­.

Let me be clear: I am not a financial wizard—I’m barely qualified to make investing decisions on “Animal Crossing”—but this model seems to make perfect sense at a time like this. The places with the greatest support can monetize its fans to stay open, and its new army of investors become incentivized to spread the word, helping drive more customers to the business when it needs it most. “This is a way for [investors] to actually affect local growth and help these local businesses, but not just out of the goodness of [their] heart, because [they are] actually getting a viable financial return when doing it,” Mainvest CEO Nick Mathews tells me. When people invest in businesses that they want to see in their own neighborhoods, he says, rather than ceding those decisions to private equity firms that favor Starbucks over mom-and-pop operations, “you’re able to drive growth and economic development without gentrification.”

It makes sense, then, that as the pandemic’s economic toll continues, crowdfunded investments like the kind Mainvest offers are suddenly a lot more popular. Matthews says his company is fielding an unprecedented number of calls from Boston-area businesses interested in launching campaigns of their own. “We’re having more conversations in the last 45 days than we’ve had in the last six months as a company,” he says. “Our team is talking to hundreds of businesses a week at this point.” And provided that a business and its landlord are keen to work together, crowdfunding may be the lifeline Boston’s beloved but cash-poor institutions need to stay open.

So far, there are notable successes during the COVID era, including Brato Brewhouse, a pop-up-turned-restaurant in Brighton that opened late last year following a Mainvest crowdfunding campaign, and this year successfully raised an additional $40,000 to build a pandemic-approved patio. Dorchester-based online bakery Top Shelf Cookies is currently trying to raise $60,000 through Mainvest to open a brick-and-mortar location, which it had intended to do before the coronavirus outbreak sidelined those plans, and has almost reached its goal.

While seemingly well-suited for today, crowdfunding is hardly new. Erik Noyes, an associate professor at Babson who teaches upper-level classes on and speaks at conferences about crowdfunding, points to the Green Bay Packers football team, which has famously been fan-owned since a public offering in 1923 brought the team back from the brink of bankruptcy. “Crowdfunding is absolutely one of the top ways to salvage the things we love,” he says.

As far as I can tell, Great Scott’s supporters had all the right ideas when it came to crowdfunding—it just didn’t, or maybe couldn’t, work out. It makes me wonder, though, if there’s only so much even a passionate community and a whole lot of money can do. No one knows how long it’ll be before our favorite bars and clubs can reopen, and I’m not convinced even the most well-meaning customers can stop closures from happening. Some bar owners have called for a federal relief program specifically tailored to their concerns, and that’s not a bad place to start.

When it comes to Lavin, it might be easy to think his experience—raising all that money for Great Scott only to be stymied in the end—would have soured him on the prospect of crowdfunding as a way to save Boston businesses, but it hasn’t. He says he was heartened by the support from funders and has a plan to use investors’ money for its intended purpose by finding a new location for a new venue in Allston—a sort of Great Scott 2.0.

Want to know the most encouraging part? All donors were given the option to take their money back in light of the new plans. So far, Lavin says, none of them have.