"I would’ve liked to have had the chance to say goodbye," the mural's artist wrote on Instagram. 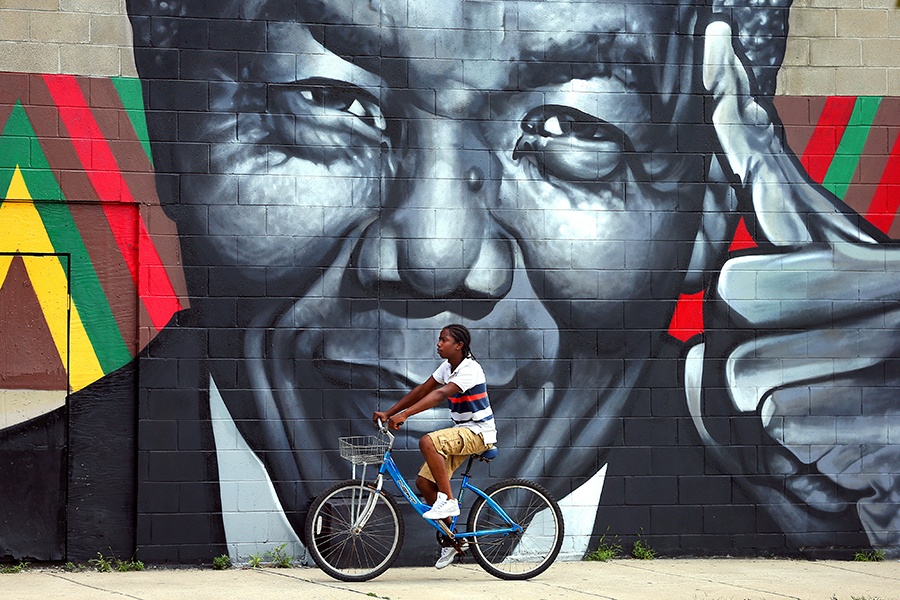 In 2014, graffiti artist and designer Ricardo Gomez, better known as Deme5, finally got the green light to start production on a major community project—a massive, 17×100 foot spray painted mural of Nelson Mandela on Warren Street in Roxbury. After just four days, Deme5, along with artist Thomas “Kwest” Burns, finished their project, and Roxbury officially had a new landmark, a larger-than-life portrait of the anti-apartheid leader flanked by the words “Roxbury Love.” The mural, inspired by Mandela’s 1990 visit to Boston, quickly rose to icon status, instigating a #RoxburyLove hashtag, inspiring controversial Heineken ads, and ushering in a renaissance of colorful public art across the city.

“I think of the Roxbury Love mural as the mecca of public art in Boston,” says Rachel Domond, an artist and Roxbury resident. “It’s a beacon of hope for the community, something that folks could take pride in.”

But now, that beacon of hope has been reduced to a brightly-colored pile of cinder blocks. Thursday, the beloved neighborhood mural was unceremoniously destroyed, to the surprise of many local residents. Per reporting in Universal Hub, the demolition of Mandela/Roxbury Love is part of Cruz Development Corp.’s plan to put up a two-building, 99-unit apartment complex that will also include enough space for the company, now based in John Eliot Square, to move into. Per the plans for the space, the project, called the Dr. Michael E. Haynes Arms, will replace the mural building with a 55-unit apartment complex, office space for Cruz Development, and a two level parking garage. The project also includes another five-story building on Waverly Street, with 44 apartments slated for senior citizens. Per a statement from Kara Elliott-Ortega, Chief of Arts and Culture for the City of Boston, the project will also bring nearly 100 income-restricted homes to the area.

“The iconic ‘Roxbury Love’ mural has been a source of pride and inspiration for residents in Roxbury and across the city, and we recognize the immense embrace it has received from the community over the years, demonstrating the power of public art,” Elliott-Ortega’s statement reads. “Mr. Cruz on behalf of his company, Cruz Companies, the oldest and largest minority-owned construction company in Boston, has committed to work with the artists to recommission the mural at or near the existing site.”

A statement from John Cruz, President and CEO of Cruz Companies, echoes Elliott-Ortega. “As a Black-owned business with approximately 75 employees, of which 95% are people of color, I have always strived to give back to my community,” Cruz says. “That is why I took steps three years ago to incorporate this mural as part of the redevelopment of this dilapidated site…I met and have had discussions with the original artist about replicating the artwork and incorporating elements of it into the building.”

However, Deme5 tells a different story. While the artist acknowledges that Mandela/Roxbury Love was always meant to be temporary, he says that the demolition of the mural yesterday came as a surprise. In an Instagram post, Deme5 said that he had been in touch with the developer in hopes of preserving the mural, creating a new mural for the new building, or even just being notified when the mural was going to come down, but that “none of these things came to fruition.”

“A lot of people don’t even know I painted this,” Deme5 wrote. “And that’s fine because I did this more for the people of Roxbury than for me. I made the choice not to sign it so the community of Roxbury could claim ownership. Unfortunately, the people of Roxbury didn’t own it…This is sappy as fuck, but I would’ve liked to have had the chance to say goodbye. ”

I’ve been wrestling with my thoughts on all of this. If I think rationally, I can say I knew this mural wasn’t going to be permanent. But if I go with my heart, to say that this mural meant a lot to me is an understatement. It was a layout that just came to me one day and I knew it needed to be on a wall in my neighborhood. I was trying to secure one in Grove Hall, but the bureaucracy of it all halted that idea. Then came this wall. I was brought in by another party, whose idea was just to tag it up with graffiti, but I knew Roxbury Love belonged there. With the help of Kwest and support from Byg, and the neighborhood folks who supported us from afar, we were able to paint Roxbury Love on that wall in 4 days. It was a battle getting Mandela just right, using just my eyes and a reference image about the size of a Polaroid. I can’t adequately express what seeing and hearing people’s feelings about Roxbury Love means to me. Thank you from the bottom of my heart. I painted this for the community I love. And it was a source of pride to see people taking pictures in front of it, to have it be listed as one of the city’s top public works of art. Y’all don’t know this but I would routinely clean up around that wall – pick up trash, rip out weeds and touch up what I could on the painting itself. A lot of people don’t even know I painted this. And that’s fine because I did this more for the people of Roxbury than for me. I made the choice not to sign it so the community of Roxbury could claim ownership. Unfortunately, The people of Roxbury didn’t own it. And though I had been in touch with the developer, to potentially work out a way to preserve it, or possibly create a new piece for the new building, or at least be notified of when the demo was gonna happen, none of these thing came to fruition. This is sappy as fuck, but I would’ve liked to have had the chance to say goodbye. #roxburylove is a #toughlove #boston #roxbury #artist #mandela #gentrification

It seems many others in the Roxbury neighborhood also wished they had had that opportunity. As the news of the mural’s destruction circulated, critics took to social media to mourn the loss of the public artwork and to point out the tone-deafness of destroying a mural dedicated to Black lives in the wake of the nationwide antiracism movement.

nah deadass the Roxbury Love mural is crossing a line that I really did not think would’ve been possible in the near future and they did it…. without notice…

the gentrification im seeing unfold before my very eyes in my own neighborhood is just disgusting pic.twitter.com/p4m4kjubDB

Black Lives Matter means Black communities matter. Gentrification is an act of violence and demolishing the Roxbury Love mural was a clear symbol of disregard for the black community here. I’m disgusted.

“I’m really frustrated that there was no meaningful community process around this,” Domond says. “And I think the fact that an apartment building is replacing it is definitely hitting the nerve of many people in the city, because Boston is one of the most quickly-gentrifying cities in the United States. So to destroy this emblem of Black culture and Black art for the sake of developers being able to make a profit off of it is really just tragic.”

The move also comes at a time when several other gentrification controversies are unfolding nearby, including the sale and redevelopment of the Harriet Tubman house in the South End and the ever-fraying relationship between Northeastern University and the African-American Master Artists-in-Residence program. The abrupt destruction of the mural, and the larger pattern of the destruction of cultural touchstones like these in Boston’s historically Black neighborhoods, will be the subject of a “speak-out” on the evening of Monday, July 27. The rally will be held at the site where Mandela/Roxbury Love once stood.

This story has been updated to include statements from Cruz Companies and the Boston Office of Arts and Culture.