BU’s COVID-Era Message to Students This Year: “F*ck It Won’t Cut It”

A new and surprisingly vulgar campaign aims to reach students in their own language. 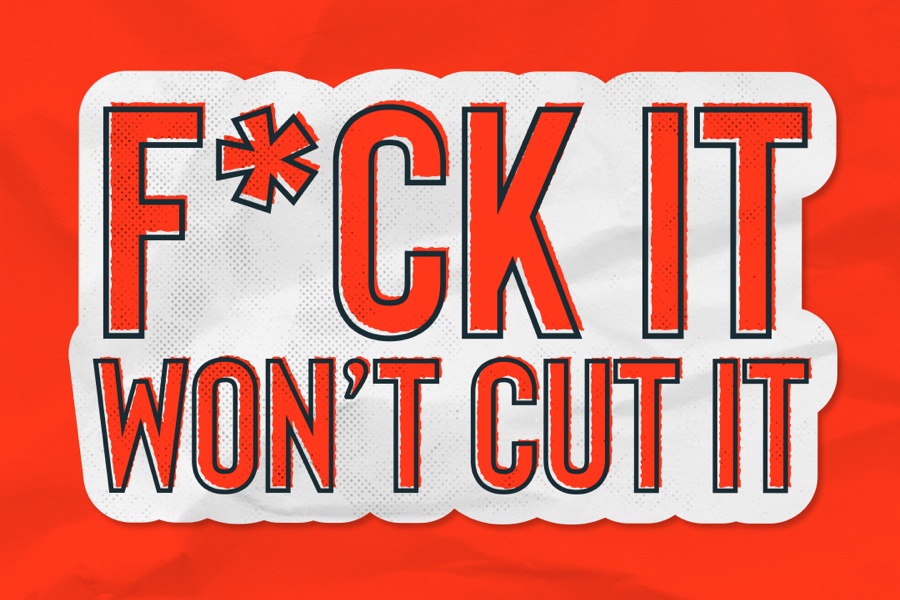 Courtesy of the F*ck It Won’t Cut It campaign

Unless things change in the next few short weeks, thousands of potentially COVID-infected undergrads are headed to Boston this fall. You can plan all you want for that reality—and the city’s colleges have tried, setting up rigorous testing plans, dramatically scaling back in-person instruction, and building isolation chambers in mobile homes just in case. But ultimately a lot of the responsibility for stopping the spread of the virus will fall on the college students themselves. And the very last thing we want at a time like this is for any of those students to have a blasé attitude about it.

So a new student-led campaign at Boston University, which has the support of higher-ups at the school, aims to banish an all-too-common phrase from fun-loving students’ vocabulary: “fuck it.”

This semester, students will be bombarded with PSAs declaring, in atypically vulgar fashion: “F*ck It Won’t Cut It.”

There’s no “over” covid 😒 Let’s follow the rules, so we can get back to a normal college life ❤️ #fckitwontcutit

The eye-popping phrasing—which emerged on BU-affiliated Twitter, Instagram, and Tik Tok accounts this week—is the handiwork of a team of advertising and public relations students from the student-run on-campus agencies AdLab and PRLab.

She says the goal is to make students stop and reflect whenever a potentially dangerous situation arises—say, they get invited to a non-socially distanced party, or their roommate keeps bringing dates back to their apartment, or the school’s guidance to take frequent COVID tests starts feeling burdensome—and they feel that familiar “fuck it” mentality rearing its head when it comes to pandemic safety.

A spokesman for BU says the college asked the students for help reaching peers in their own language, and of the many ideas they cooked up, “This campaign was by far the most effective,” adding, “The students have assumed responsibility for helping to protect the health and wellbeing of the entire community, which we are very supportive of. Their work and their voices are unmistakably clear about how we all need to adapt and behave in a COVID-19 world.”

So far, the effort appears to be catching on. In just one day after it debuted, the F*ck It Won’t Cut It Instagram account—complete with expletive-rich PSAs, advice on how to maintain a socially distanced sex life, and Tik Tok dances—already had 1,700 followers.

Testing counts during move-in period 🧑‍🔬We have to test often, so college can go on this year. Do your part 👏#fckitwontcutit @healthline

It’s a lighthearted and creative approach to a very real problem colleges are already facing before the semester even gets underway. As the coronavirus outbreak continues to rage around the country, some Massachusetts colleges have already begun scaling back their reopening plans, with some opting for entirely remote-learning. Large gatherings, which college students are known to enjoy, have become a focal point of the state’s response to the pandemic amid a recent uptick in cases, prompting newly tightened restrictions from the governor that took effect this week. So BU hopes a friendly, and slightly edgy, voice in their ear this year will remind students that they could see their on-campus college experience come to a halt if proper precautions aren’t followed.

So students can expect to be bombarded by all kinds of anti-“fuck it” messaging when they get back to school. Schweitzer tells me that in addition to the social media campaign, the phrase will appear on light-up video boards around campus, and there are plans afoot to have “brand ambassadors” distribute T-shirts, stickers, fliers, and masks. At some point, they plan to launch a F*ck It Won’t Cut It podcast.

BU is so enamored with the phrase that earlier this month it filed a trademark for it.

Boston University filed a trademark on August 6th for:

F*CK IT WON’T CUT IT

The filing states that @BU_Tweets will use the phrase to promote awareness about smart behaviors for students during COVID-19.

Exactly when and how students can expect to hear the memorable tagline this semester is likely to evolve. Asked if 69-year-old BU President Robert Brown might someday utter the phrase himself, Schweitzer tells me, “We have already heard [him say] it.”