We went straight to the source and asked. 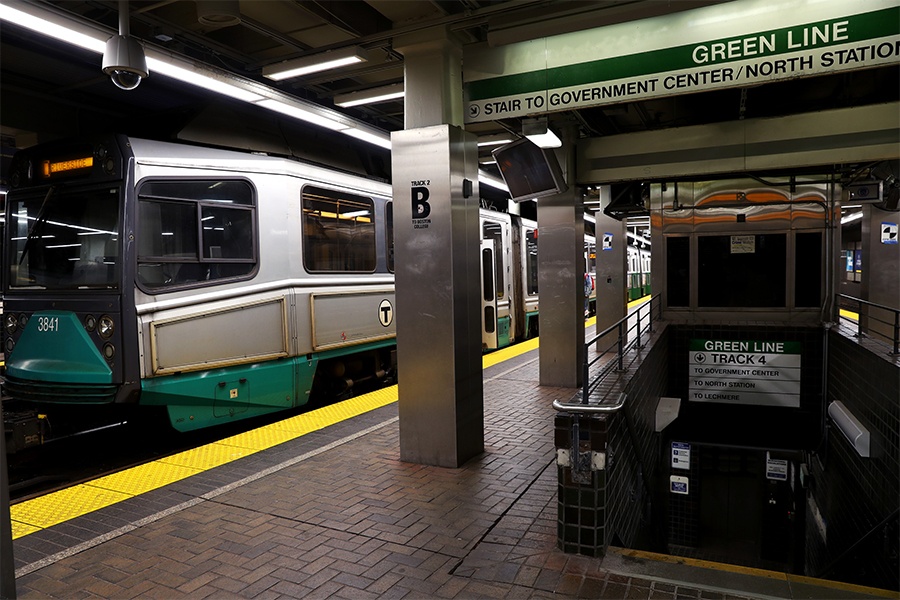 As we find ourselves deep into the sixth month of the pandemic, several newfound staples of etiquette, good sense, and lawful health and safety requirements have taken hold, not the least of which is: You’d better strap on a mask when you’re out in public, if you know what’s good for you.

Yet a recent spot check reveals that some of the state’s most essential public employees aren’t following that one simple rule, in direct contravention of both Gov. Charlie Baker’s executive order and the public agency’s own policy. Who are these offenders, you ask? They are our busy, hardworking MBTA workers.

The MBTA makes it very clear that it requires its employees to cover up in public places in accordance with the executive order. To underscore the point, MBTA spokesman Joe Pesaturo told me that “masks or face coverings must be worn by employees and riders inside MBTA stations and vehicles.” Yet as I traveled to and fro along the T system recently—my mask securely and steadfastly in place—I observed a number of T workers whose faces were conspicuously unencumbered. Curious, I decided to ask some of them why they chose not to don a mask.

I started my intrepid journey at the very end of the Green Line, at the decrepit Lechmere station where those dreaded shuttle buses are operating. My first subject was a T shuttle employee, who seemed quite perturbed by the question and fired back, “It’s none of your business. Leave me alone.”

I followed this piece of advice and moved along to the center of the action at Park Street station, where I found another T worker, also not wearing a mask, who responded, “Oh, I don’t know. A lot of passengers aren’t wearing them either. So what’s the use?”

Disheartened but determined, I continued my odyssey on the Green Line to Copley Square station, where I found yet another maskless T employee who bristled at the question, responding, “You ought to mind your own business. Report me if you want. You want the phone number to call?”

I chose not to call the number, but I was undeterred in my survey. The next day I observed two T transit police officers talking to each other at the Downtown Crossing station. Asked why they were not wearing masks, they both put them on. But when I went back 10 minutes later, I discovered that one of the officers had taken her mask right back off again.

Trains aren’t the only place I found maskless T employees. After my encounter with the transit police officers, I came upon a bus driver on the Silver Line who snapped, “Get a life, sir,” when I asked why her mask was only covering her mouth and not her nose.

My survey had become quite discouraging. The next day, a T employee sans mask at Harvard Square station said, “I have it right here in my pocket. I guess I should put it on.”

But not every response was disappointing. One T worker put her mask on without saying a word, and I found another worker who put it on and apologized, telling me I was right. And on a third occasion, a maskless T employee even thanked me for the reminder.

Asked to comment on the coarse nature of some of the replies, Pesaturo noted the T has taken action since the advisory went into effect by issuing oral or written warnings to MBTA employees who weren’t wearing masks, and offered to investigate any specific incidents.

Out of all the responses offered by the MBTA employees during the course of my mini-survey, here’s the one that was by far the most memorable. At one point, I came across a T worker at Kenmore station who looked like he was in the twilight of his career. Seeking to find some common cause between us, I said to my contemporary, “We’re both in the age category that’s most vulnerable to COVID-19. So why aren’t you wearing your mask?”

His response: “Go fuck yourself, mister!”