When the Temperature Drops, Boston Needs to Stay Outside

As the weather changes, we shouldn't change our instincts to gather outdoors. 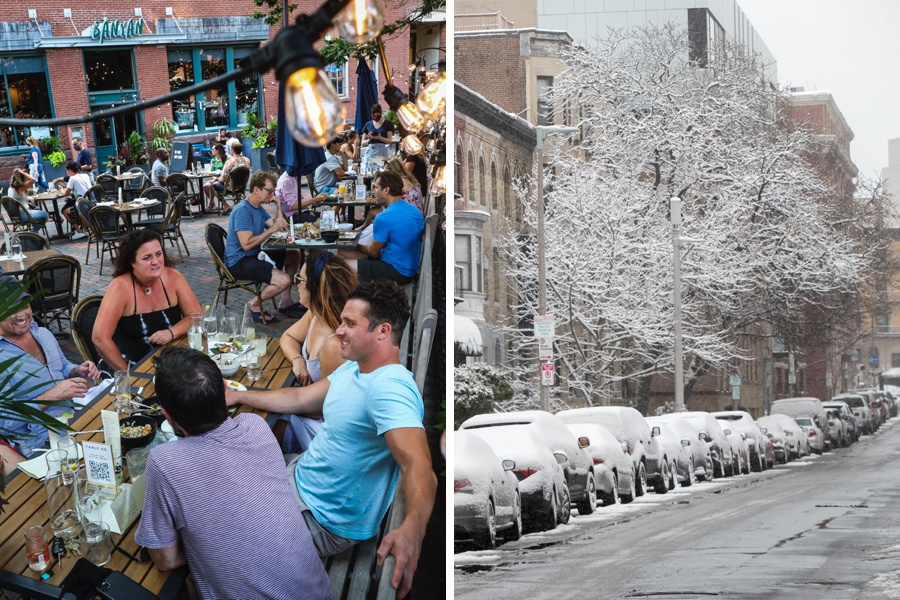 After all the chaos and tragedy the city saw in the first weeks of the pandemic, by summer Boston had an improbable amount of breathing room. Case numbers have stayed low, and by following the science that shows being outdoors is relatively safe, we’ve been able to actually enjoy ourselves, in spite of everything. Many of us are spending more time than ever outside, and days spent lounging under the warm sun in parks and eating out at restaurant patios are soul-cleansing. But as some cool temperatures finally arrive at the tail end of beach season, I think we all need to acknowledge the cold, hard, meteorological truth: It’s not gonna be summer forever. Soon, the harsh New England winter will bring major changes to all of our lives, and the time to start preparing for that reality is now.

Health officials are already warning that a lack of vigilance on safe decision-making could lead to a new surge of COVID here as the seasons change. “We can’t rest on our laurels,” says Dr. Thomas Tsai, assistant professor in the Department of Health Policy and Management at Harvard T.H. Chan School of Public Health. “It’s easy to do this in the summer. It’s gonna be hard in the fall.” So: holiday celebrations are off the table. Thanksgiving feasts and “Friendsgivings” in the homes of buddies and loved ones are out this year, as are Halloween costume bashes, Christmas parties, crowded New Year’s ragers at Boston bars, or any other beloved wintertime traditions that involve finger foods, punch bowls and high concentrations of people you like. We know the mental health costs will be high— already, the pandemic has had serious impacts on mental health and substance abuse. Combine the unprecedented cabin fever that a COVID-19 winter will bring with the very real and well-documented effects of seasonal affective disorder once daylight hours begin to dwindle, and it’s not hard to imagine this season will be a very sad one indeed. A creeping sense of dread about winter has begun creeping into local news coverage: Recently, the Boston Globe, seeking advice on how to cope with extreme isolation, turned to South Pole researchers and submarine crewmembers for help.

It all adds up to us preparing for the biggest bummer of a winter most of us have experienced since the Snowpocalypse of 2015, which means it’s time to put a lot of extra effort into staying sane this season. And the easiest thing we can do? Get used to spending more time in the cold.

For one, dining on sun-drenched patios will soon be a thing of the past. “That is a concern that every restaurateur in the city of Boston is bracing for,” says Bob Luz, head of the Massachusetts Restaurant Association. Everyone who’s been happily dining outdoors, but carefully avoiding restaurant interiors, will be forced to revert to takeout-only, or spend previously unthinkable time noshing on patio furniture while wearing jackets. But restaurants have already begun planning how to squeeze in as much outdoor dining as possible before the dead of winter, stocking up on blankets and heating lamps to keep diners cozy, and hoping guests bring the same enthusiasm to cold-weather patios that they do to, say, autumn Pats game tailgates. No one is going to want to eat in the snow, but we’ve already gotten used to dining on the slopes—it’s time to bring that sensibility to Boston itself.

But dining isn’t the only way to spend time outside. We live in a region with plenty of options for people to lean into outdoor activities in the colder months. For those of us who’ve newly taken up hiking as a safe option for getting outside, perhaps now is a good time to invest in some snow shoes, and take some treks at wintertime hot spots like the Arboretum or the Blue Hills. Or there’s always cross-country skiing, and there are plenty of places to do it around Boston.

Downhill skiing and snowboarding will—fingers crossed—still be on the menu in New England this year, and Vermont resort towns say they’re hoping visitors from the region will be heading to mountains in droves, bringing much-needed economic activity to the hard-hit communities. And if you’re looking for something a little easier, sledding is a good option, and there are plenty of places to do so around Boston. Plus, making and displaying snow and ice art—the gargantuan blue lobster at the New England Aquarium from a few years back comes to mind—will be a perfectly safe activity this year, and a not-bad way to cheer up your gloomy neighbors in the process Winter, thanks to the holiday season, also happens to be a time in which people tend to feel especially charitable, so there has never been a better time to get involved in local mutual aid groups, put in some shifts at food banks, or pick up a pen pal at a local home for seniors.

Truth be told, this winter is the perfect opportunity to convert our trademark rugged individualism into something more collective in nature. Surely we can summon the region’s hardy spirit to endure some extra time outdoors even in the shittiest of weather, and resist the urge to retreat inside. So as temperatures begin their inevitable slide, now is the time to invest in a good flannel, browse the catalogue of your favorite regional boot-and-jacket purveyor, and channel your inner ice fisherman’s flinty stoicism. We were made for this.