Can the Duck Boats Recover from a Summer with No Tourism?

How the city’s iconic water-going buses have managed to stay afloat in a dried-up tourism season. 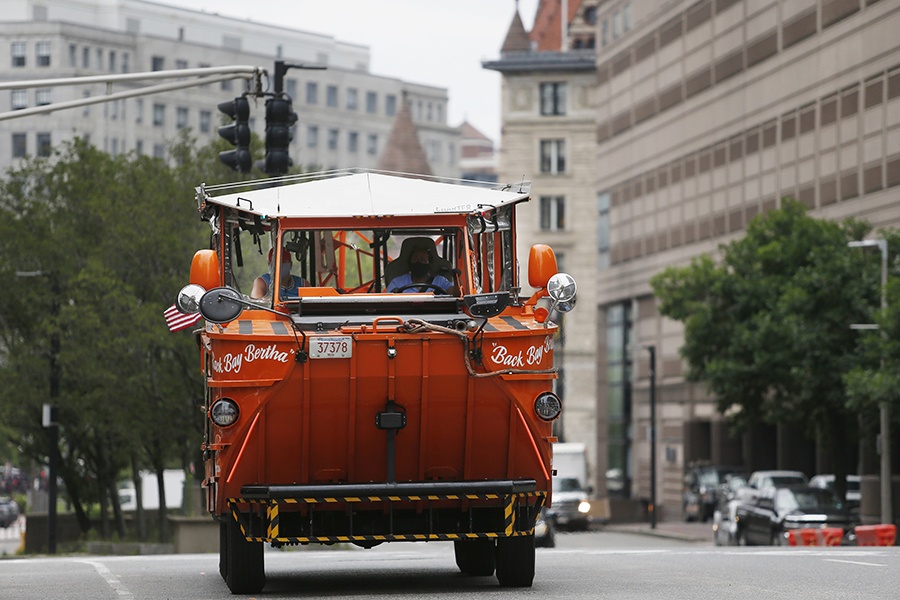 Usually, summer in Boston means turning the volume up on the city soundscape: Concerts and ballgame cheers flood Lansdowne, tourists ask for directions in every language, and megaphone-led walking tours wind along the Freedom Trail. But this year, one of the most notable differences about downtown Boston is how much quieter it is. It’s so still, in fact, that a few weeks back the Public Gardens’ small, beloved pond mutated into a stagnant, duck-killing lagoon of doom because there were no visitors to churn up the water on the Swan Boats. As much as we may gripe about out-of-towners clogging up our already-congested roads, tourists are a vital part of our fragile ecosystem. And among those struggling to stay afloat in this quiet summer were Boston’s famously buoyant buses: the duck boats.

The Boston Duck Tours, which usually run all summer long, were just about to hit the streets in March when they were ordered to stay in the nest as part of Charlie Baker’s shutdown order. Instead of spending early spring tooling up and down the streets with tidbits of Boston history drifting out to passersby, the boats were locked away in the company’s garages. It wasn’t until mid-July that they were allowed back out, and the damage was stark: The fleet was forced to shrink to half its usual size to save on registration costs, and new pandemic regulations meant that even those boats on the road were traveling at half their capacity. Combined with a concurrent precipitous drop in out of town travelers, it all adds up to a bleak summer for one of the city’s most iconic tourism draws. Could we be staring down a future when they leave the streets completely?

There’s no question it’s been a brutal summer for the company. After that late opening, Boston Duck Tours CEO Cindy Brown says they’ve found themselves in dire straits trying to navigate the dried up tourism season. “We’ve lost business from everything from school field trips, to international visitors, to conventions to meetings, and cruise ships. You know, every area that we rely on for visitors,” she says. And that depleted supply of patrons has impacted every nook and cranny of the city’s hospitality industry.

As COVID-19 spread throughout the world, borders began sealing to ward off contagion, simultaneously preventing any travelers from making their way to Boston—and injecting money into the local economy. In July of 2019, for instance, Logan Airport serviced more than 4 million passengers. This last July, just 738,135 travelers took off and landed on the East Boston airstrip, according to the Greater Boston Convention & Visitors Bureau. Even fewer travelers landed there in June as a remote learning school year wrapped up: A paltry 438,266 people flew in to the city then. And because they weren’t flying in, they weren’t staying in our hotels. The average occupancy for all hotels in Boston and Cambridge was just over 90% with an average rate of $281 in July of 2019. Exactly one year later, COVID had cleared rooms out, dropping occupancy to 13.8% percent (a considerable increase from April’s 5% occupancy rates), with an average nightly rate of $151. To put it frankly: “The COVID-19 crisis has virtually decimated the tourism sector in greater Boston,” says Martha Sheridan, president and CEO of the Visitors Bureau.

Those woeful numbers hit the duck boats hard. The 550,000 or so tourists that spill onto the multicolored coaches each year haven’t appeared. With capacity down and international travel out the window (last year out-of-country visitors accounted for about 20% of ridership), that number has plummeted to 22,150 total patrons in the company’s first eight weeks of being open. Decreased patronage has forced some tough choices: Of the 200 employees that typically run operations, only 70 were able to keep their jobs—and staff is about to get even sparser when they cut back on their hours this month, says Brown.

“It’s been really heartbreaking, and I’ve had really difficult conversations with managers and staff about what we can and cannot do,” says Brown. Faced with declining tourism numbers, the company halved their number of vehicles, replaced full-time positions with outsourced part-time employees, and is even looking to sublease part of their recently expanded office space. “We’re trying to get through the end of October to keep people employed as long as possible before we close for the winter.”

Ultimately, though, they need to turn a profit to afford to stay open, and even with all the creative cost-cutting they’ve done, the margins are tight. “We just had a Zoom call with our staff the other day and we found that [in the first eight weeks of being open] we made $2,000 profit, so we basically broke even,” explains Brown. “We’ve committed to [our employees] that as long as we’re not losing money, we’ll keep operating. I think it makes people feel good to see the ducks on the road, and it feels good to have people working and giving visitors that are in Boston something to do.”

Pandemic or not, though, the season for warm weather activities is winding down, which means an approaching deadline for seasonal employees. As the official last day of summer creeps up, increased unemployment is front of mind for Sheridan. “We fear that many small businesses that rely on visitors for their livelihood will close. And perhaps most importantly, this crisis has significantly impacted the ability to bring our valued hospitality employees back to work, which will have a profound impact on the greater Boston economy for the foreseeable future.” It’s a domino effect that will take quite a while to correct—Sheridan doesn’t anticipate a full recovery of the industry until late 2022 or 2023.

But don’t write off the duck boats just yet— data shows that hotel and flights have started to tick back up in recent months, and Brown says the tours have seen an early-September bump in ridership. She also says that a silver lining of the adversity is that it’s causing the tourism industry to band together more than before, with the company collaborating on weekly calls with industry partners such as the museums and transportation companies, and sharing advice on logistics like the best places to buy hand sanitizer in spray form. And while most of the masked duck boat riders have hailed from Massachusetts or other parts of New England, visitors from almost every state have made the trip to cruise around Boston on the quirky bus-boat-hybrids, Brown says. Perhaps most encouragingly, the company has managed to preserve a million-dollar reserve to jumpstart next season. With any luck, it’ll start right on time.