How to Disrupt the Whiteness of Boston Philanthropy, One Dollar at a Time

Funds from Boston’s philanthropies flow overwhelmingly to white-led organizations. Here’s how 19 of Boston’s most successful business leaders of color are determined to change that, one dollar at a time. 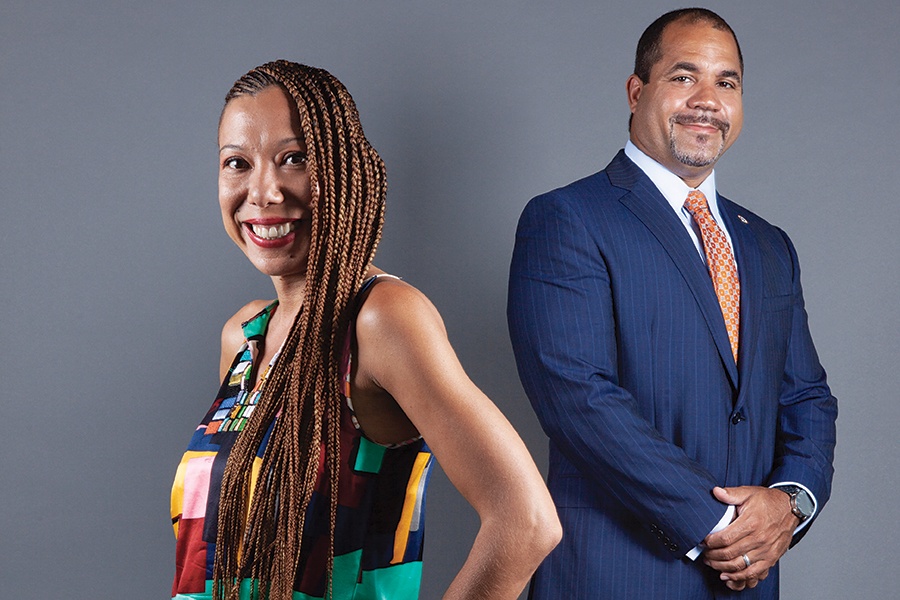 Quincy Miller is no stranger to community service. The president of Eastern Bank has given his time and expertise to organizations that help kids become the first in their family to go to college, give food to people experiencing hunger, and work to create more opportunities for people of color. Still, in the long days following George Floyd’s death, as he tried to run a bank while experiencing a grief more profound than he had ever known, Miller became convinced there was something more that he, a man with power and connections, could be doing. In between Zoom meetings, bank sessions, and bouts of tears, two questions rattled incessantly in his mind: What can I do? What can we as a community do?

Miller wasn’t the only corporate leader of color in the state pondering those questions. On June 4, less than two weeks after Floyd’s death, Miller’s phone buzzed with a text from Damian Wilmot, senior vice president and chief risk and compliance officer at Vertex Pharmaceuticals: “Want to get together and get some other professionals together to talk about what we can do? Do you have time this Sunday?” It was as if Wilmont had read Miller’s mind. He immediately and enthusiastically texted back: Yes.

A flurry of text messages and several days later, eight corporate leaders of color came together on a Sunday afternoon Zoom call. The mood was somber as they discussed Floyd’s killing, but something other than grief was also palpable: a sense of possibility. “To see all of those beautiful Black and brown faces on that Zoom call, we all know what we can do separately, but what could we achieve together? That was the exciting part,” says Myechia Minter-Jordan, who has long worked in health in underserved communities and is now president and CEO of DentaQuest Partnership for Oral Health Advancement and the Catalyst Institute.

As the call continued and the participants brainstormed ways to collaborate, common themes began to emerge: They all had significant social capital. They all knew how to raise money. Why not establish a foundation that could dismantle the systemic racism Black and brown communities face across the state? Quickly, the idea emerged to form an all-new type of philanthropy. They would call it the New Commonwealth Racial Equity and Social Justice Fund, and focus on four key issues for communities of color: policing and criminal justice reform, healthcare equity, economic empowerment, and youth education. They also agreed to draft additional business leaders into the fund’s ranks—eventually totaling 19 members—and decided the organization would be run exclusively by people of color. The avowed goal was to raise $100 million. “This is the first time that I can remember, in the 20 years that I’ve been working on issues of race in Boston, that I’ve seen this kind of Black-led corporate initiative,” says Malia Lazu, then executive vice president and chief experience and culture officer of Berkshire Bank, who joined the fund after the original call.

As the founding members honed their plan, they agreed it wasn’t enough for the fund to be led by people of color, or to direct its monies toward breaking down the systems that uphold racism. What they also wanted the fund to do, which was at once subtle and radical, was prioritize giving grants to small organizations and nonprofits across Massachusetts that are led by people of color—something, it turns out, many of our long-standing philanthropic institutions have failed to do.

Massachusetts, and Boston in particular, are known for having a strong culture of philanthropy, and many charitable organizations fund groups that work in communities of color. But most do it by funneling money through organizations led by white people, in some ways reinforcing the very dynamics that their efforts are supposedly trying to dismantle. “Racism affects everything we do,” Lazu says. “There’s an implicit and institutional bias to accessing capital that negatively affects how people of color are able to run organizations.” In fact, a report published in May by the Boston-based philanthropy consulting firm the Bridgespan Group found that nationally, there is a $20 million gap between what white- and Black-led organizations receive in early-stage funding. It’s philanthropy’s dirty little secret, and precisely what this newly formed group of professionals of color is determined to change.

No one needed to tell Minter-Jordan that POC-led organizations face significant funding challenges. Having spent years in Massachusetts’ health sector, previously as a leader at the Dimock Center, which serves the healthcare needs of predominantly Black and brown Roxbury, she has experienced it herself. She vividly remembers how difficult it was to secure funds for Dimock. “I definitely felt that as a leader trying to raise dollars, there was a different bar being set” for her as a woman of color, she says. “And the terms of the funding, when you approach a funder, the level of measurement that they require, the level of hoops that you have to go through” are all more intense. A significant challenge was breaking into the mostly white world of contributors and benefactors. Because relationship-building has historically happened along racial lines in Boston, many Black and brown leaders of organizations have found themselves outside of the networks where funding happens. “I would very often be the only person of color in a room and have no network,” she recalls.

Minter-Jordan’s experience is quite typical for people of color leading local community-oriented businesses or organizations. There are two practices within philanthropy that have had significant detrimental impacts on POC-led businesses and organizations. One is the underinvestment, or so-called philanthropic redlining, of Black- and POC-led institutions. The second, which a study for the Association of Black Foundation Executives refers to as “Philanthropic Black Codes,” are rules and requirements applied primarily to Black- and brown-led organizations, such as demanding monthly financial reporting and surprise monitoring visits. Like Minter-Jordan, many leaders of color say they have had to jump through hoops that their white counterparts did not in order to secure and maintain precious grants.

Despite the increased attention these pernicious practices have received in recent years, Jim Canales, president of the Barr Foundation, the state’s largest charitable giver, says his organization does not track how many of its grants are awarded to organizations led by people of color. Still, he says investing in such institutions is something that, without a doubt, foundations should be doing. Meanwhile, Orlando Watkins, vice president of programs for the Boston Foundation, didn’t provide a breakdown of grants but says that it is clear that “a larger number of organizations led by white executive directors with majority white boards were getting larger shares of the philanthropic resources.” The result of years of structural racism, he says, this funding disparity is something the foundation is working to address. Remediating the problem, however, isn’t merely a question of courting nonprofit leaders of color to apply for grants, Watkins says, but of grant-makers and foundations “fundamentally believing that those leaders and their lived experience and their proximity to the work will get us closer to our mission.” (The Boston Foundation is administering the New Commonwealth fund.)

The New Commonwealth fund, by definition, was determined to do things differently. But first it needed to raise money. Members of the group approached their own companies to start. Even as the president of Eastern Bank, Miller quickly discovered that securing donations was not easy, especially when he was requesting such a significant commitment. “Our ask is not just for corporations to cut a one-time check,” he says. “It’s to commit to a multi-year process of giving to this important initiative.”

Miller arranged phone calls, Zoom meetings, and even a town hall for Eastern Bank employees to make his pitch. It was worth the effort. The Eastern Bank Charitable Foundation committed to giving $1 million a year for the next five years, as did the State Street Foundation, thanks to New Commonwealth member Paul Francisco, State Street’s chief diversity officer. In just a few short weeks, Miller and other members of the fund had raised $20 million from their own organizations alone. With the money in hand, they were finally ready for their coming-out party. Yet much to the members’ surprise, they soon learned they were not alone.

On a bright Thursday morning in late June, a crush of reporters gathered in front of City Hall for the announcement of a new fund for racial equity. As the din of the crowd died down, the fund’s leader strode to the podium, removed his face mask, and addressed the media and the city of Boston. Only it wasn’t Miller, or any other member of the New Commonwealth fund. It was Mayor Marty Walsh, announcing his brand-new Boston Racial Equity Fund, which he said would work to invest in nonprofits that “empower Black and brown residents in economic development, in public health, in youth employment, in education, in the arts, and other areas.”

If it sounds a lot like what the New Commonwealth fund was doing, that’s because it is—with one stark difference: It is not led by a person of color. Walsh’s fund, with its unfortunately timed launch just days before Miller and his peers planned to go public with their initiative, became an immediate target. “This is city government stepping in to suck the money that would otherwise be going through efforts led and created by Black and brown business leaders in Boston, and injecting this political element to it, when in fact, our job in city government is to do the structural work,” City Councilor Michelle Wu told a local radio station.

In many ways, the mayor’s fund serves as a clear example of the problem that the New Commonwealth fund seeks to address—it is a philanthropy directed at people of color, not one founded by people of color. It’s also one that has the potential to corner resources that otherwise would have gone to a POC-led foundation. “I think the general initial concern, from the community at large, was that there’s only so much pie,” Lazu says, and that “perhaps folks would be more willing to give to the mayor’s fund than an initiative led by Black and brown people.”

Still, members of the New Commonwealth fund say that racism is a big enough problem that multiple efforts working in tandem makes good sense. Already, there seems to be room for cooperation: Several members of the New Commonwealth fund, which works broadly throughout Massachusetts, have agreed to serve on the advisory council of the mayor’s initiative, which serves only Boston.

In the long term, Lazu and Minter-Jordan say, the keys to success will be not only making sure the two funds don’t compete for the same charitable dollars, but also making sure the pie of resources grows even larger. New Commonwealth fund members are working to meet the challenge of raising $100 million by the end of the year. Even if the fund is successful, its members know their initiative alone cannot solve systemic racism—but it is a step in the right direction. It may also change the face of philanthropy in Boston along the way.