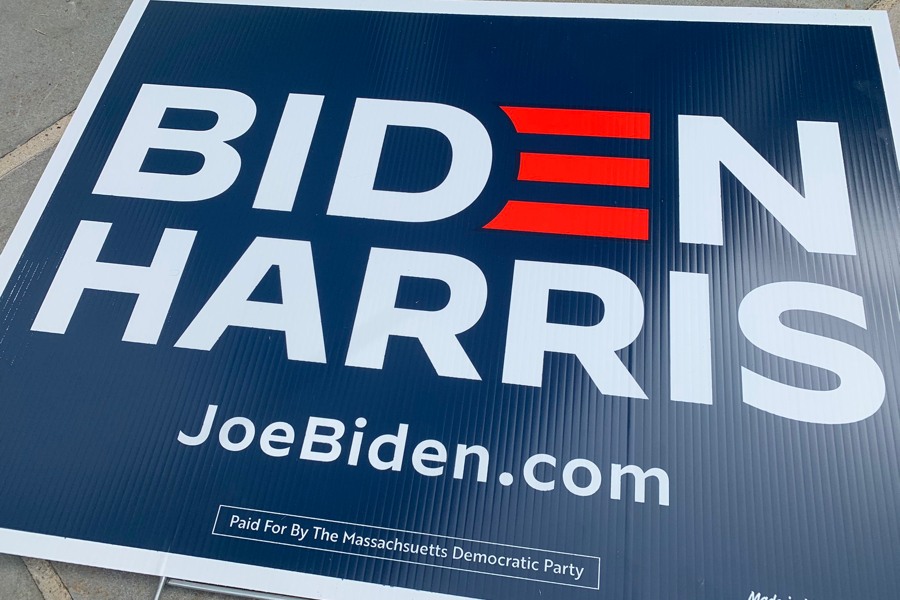 When Jessy Han, a 19-year-old podcaster from Andover, saw that his local Democratic Town Committee had Biden/Harris lawn signs up for grabs, he was eager to show his support for the campaign. So he happily handed over a $7 donation and picked one up over the weekend.

“I was wondering who had paid for it—whether it was the DNC or the Biden campaign, or what—so I just picked it up and read it, and I noticed it right away,” he tells me. “It was kind of unfortunate that there were 12 words on the sign and one of the main ones was spelled wrong.”

Great sign but slightly disappointed at the Massachusetts Democratic Party for misspelling the name of our own commonwealth. pic.twitter.com/MLlzkaLRkz

It’s not clear how many “Massachsuetts” signs are, at this point, populating the lawns of local Democrats. After Han, who co-hosts a podcast called “The Cod Cabin,” tweeted a photo of the misspelled sign on Twitter, commenters responded to show that their signs, too, contained the mistake.

The party, through a spokeswoman, says it is “aware of the typo and corrected the error in subsequent print runs.”

But it’s no small thing to have goofed on at least one batch of them, and it could be a costly mistake. A website that specializes in yard sign production, called PoliticalLawnSigns.com, says it charges $2.50 a pop for full-color corrugated plastic signs—like the Biden/Harris ones in question—when ordered in quantities of 2,500 or more.

In fairness to the Dems, all of us have at one point or another goofed up on the spelling of our commonwealth’s name, which is an especially long one, and it’s not like the Biden campaign is struggling for name recognition in the perpetually deep blue Bay State. Still, local history has shown that proper spelling in campaign materials can be the difference between a political boost and a political liability. Just ask Joe Kennedy III, whose Congressional primary campaign was roundly mocked in August after a full-page ad in the Worcester Telegram & Gazette included a misspelling of that newspaper’s home city, in giant block letters: “WORCHESTER.” The ad was the handiwork of the local IBEW, not Kennedy’s team, but the damage was done.

Same goes for Martha Coakley, whose U.S. Senate campaign was hit by a similar degree of finger wagging in local and national outlets for an anti-Scott Brown attack ad that included the word “Massachusettes.” Later, when she ran for governor, she endured more ridicule when an endorsement from Emily’s List accidentally indicated she would be “the worst woman elected governor in Massachusetts” (they’d meant to say “first”).

For his part though, Han says he’s not all that worried about the misplaced letters in his new purchase. After all, lawn signs are designed for fleeting shows of support to passing drivers, not for close inspection. So, typo or no typo, it’s currently displayed on his lawn.