Admit It, Boston: You Love Your Miserable Weather

Complaining about the weather is as Boston as a Dunkin on every corner. 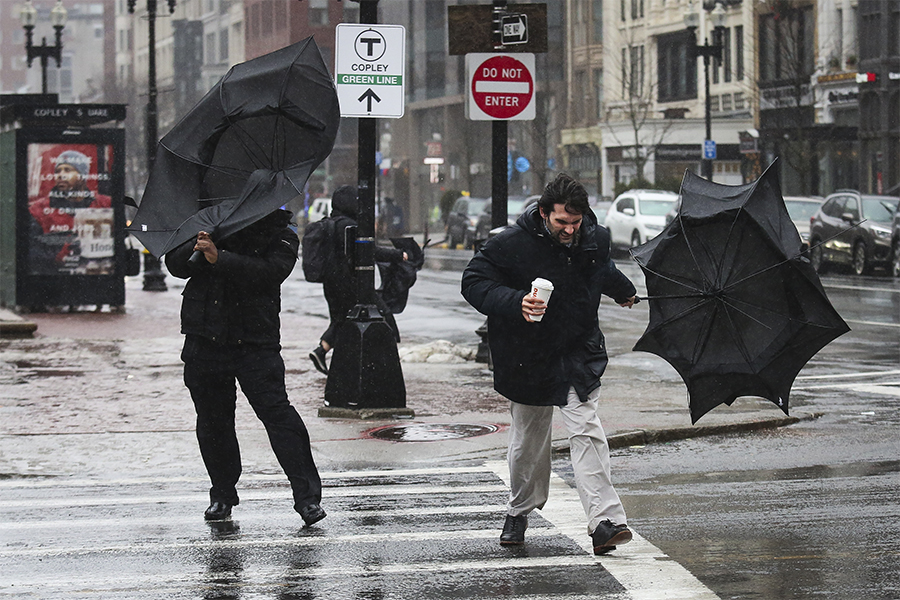 Photo by Erin Clark for the Boston Globe via Getty Images

The other day, for the first time in what seems like eons, I smiled. Let’s be clear: It wasn’t a huge smile, like the kind you get if you’re in a 1980s Toll House commercial and you smell fresh baked cookies. The smile was more of a scheduled feeling. That feeling, that not-quite-a-smile I got, was because my favorite season is upon us. Every year, like clockwork, it just clicks. The air gets crisp. At least I think it does—I haven’t opened my windows since March. But it’s autumn. Time for getting lost in a corn maze, long walks through the foliage, apple picking in an orchard with girls who wear goofy sweaters and dumb boots, and other things I’d do if my name was Brad and I wore a manbun and walked eight medium-sized dogs around Brighton. And if we lived in a time where zombies didn’t roam the earth. On the rare occasions that I do venture out, that invigoratingly brisk air feels like spring started dating summer but texts winter at 3 a.m on the low. We love autumn in Boston. Except for one thing: We don’t.

Oh sure, we pretend to love autumn. We walk around with big smiles, rocking scarves and tolerating cardigans, saying shit like “This is when I really start dressing, fam.” But I know the truth. We all know the truth. There’s no fun in that. The weather is too nice. This is BOSTON, and if I know the one thing that brings us all together as one people, aside from judging the fuck out of anyone wearing Adidas sneakers with a Nike sweatsuit, it’s our incessant need to complain about the weather. We need it. Next nice day, go ask someone in Boston what it’s like outside (and I mean a tried and true Bostonian and not some transplant from Connecticut who wears turtlenecks on purpose) and watch them, through gritted teeth, say “I-it’s…nice” as they squeeze the Dunks cup they’re holding until it smashes into a thousand pieces even though it’s styrofoam. Autumn is mild. Fuck mild. We can’t complain about mild. We like extremes. That’s when we shine!

So many things are uniquely Boston. A short list: one Dunkin Donuts being across the street from another Dunkin Donuts, watching a guy beating up another guy outside of a bar at 1 a.m. as Phil Collins’ “In The Air Tonight” plays softly in the background, and making movies that pretend Black people don’t exist anywhere in the city. But nothing has ever been as fiercely unifying as complaining about the climate. Every old guy wearing a home red Steve Grogan Pat Patriot jersey who tries to hide his giddy smile as he sets down a lawn chair in the street, daring someone, anyone, to steal his freshly shoveled parking space on a frigid winter day knows what I’m talking about. And we have a wide range of complainers, too—everybody from the talentless hack at your job who hits you with a daily “cold enough for ya?” on the way into work to the cunning aunt who has somehow compiled the phone numbers and home addresses of every meteorologist in the city who has wronged her since 1985. I’ve traveled to a lot of places doing comedy and no other city threatens to murder its weathermen. We know them. By name. We know these people like we know our athletes. I’m surprised they don’t have trading cards—”I’ll trade ya two 1978 Dickie Albert rookies for a 1958 Don Kent.” (Yes, I researched this). Ever walk into a roomful of people arguing on a Sunday afternoon and ask “what happened? Who scored?” only to be met with “MUFFUCKIN HARVEY LEONARD SAID ALL WEEK IT WASN’T GONNA SNOW AND IT’S COMING DOWN OUT THERE! SNOW? IN DECEMBER?? I GOT SHIT TO DO!” Complaining about the cold is sport to us.

But it’s not just a winter thing. We love to whine about hot days too. You’d think the warm days of summer would be complaint-free. The beaches are open, the grills are being fired up, and you can finally break out that sleeveless tee and terrify the neighborhood. But before you stress out that lawn chair and lay back to expose those righteous pits while cracking open a 5th Miller High Life, always remember that this is the city that invented the word “sweltering.” In what other city in America will a total stranger gleefully tell you about how they’re “sweating my balls off!”? The amount of people I know that will scream bloody murder about a heatwave but flat out refuse to “run up my friggin’ electric bill!” by turning the A/C on is astonishing.

Why is Boston like this? Why are we damn near giddy about miserable weather? Is it foolish pride? Maybe. We make fun of anyone new to the city who dares so much as grimace at a 20° day whether we know them or not. We have long been an “us vs. them” city. An out of towner saying “How do you do this every year?” is enough to get us to pop that Phil Collins tape in. Maybe all of us, deep down, are just proud, grizzled old sea captains and extreme weather is our sinking ship. We’re duty-bound to it. It’s why we can’t simply agree with (or ignore) someone’s passing assessment that maaaaybe our weather is a little weird at times, because they have the audacity to be from Florida and we’d rather eat Manhattan clam chowder out of Aaron Boone’s Yankee’s cap than listen to someone from a state that people choose to live in despite the fact that alligators can ring the doorbell. Instead, we find solace in puffing out our chests, popping the cork on that rum and belting out the entire score of the H.M.S Pinafore as we slowly descend into the hahhhbaahhh.

So rejoice, Boston. Don’t let the annoying beauty of fall get you down. Your time is near. Soon the dewy sweet breeze you feel on your wool covered shoulders as you blow the steam off the pumpkin spice latte that you pretend to like will be replaced by the frigid air of truth and a large regular with 8 sugars. The gorgeous foliage will make way for desolate roads and barren trees. Say goodbye to the wondrous Hundred Acre Wood and hello to the darkness of the Enchanted Forest. Every time you scowl as you blow into your hands and rub them together for warmth because you forgot your gloves, remember: I know deep down you’re happy. That scowl is masking a childlike anticipation of someone asking your opinion about the weather for no other reason than they want you to ask them theirs in return and you two can have roundtable discussions about who has it worse. That’s your Christmas morning. So in January, when it’s frosty out and you’re hustling to get somewhere as you pass three people that face planted on the ice and hear at least five YA GOTTA BE SHITTIN’ MEs, know it’s the most wonderful time of the year.