Other cities are turning car-free roads into outdoor destinations this year. Why can't we? 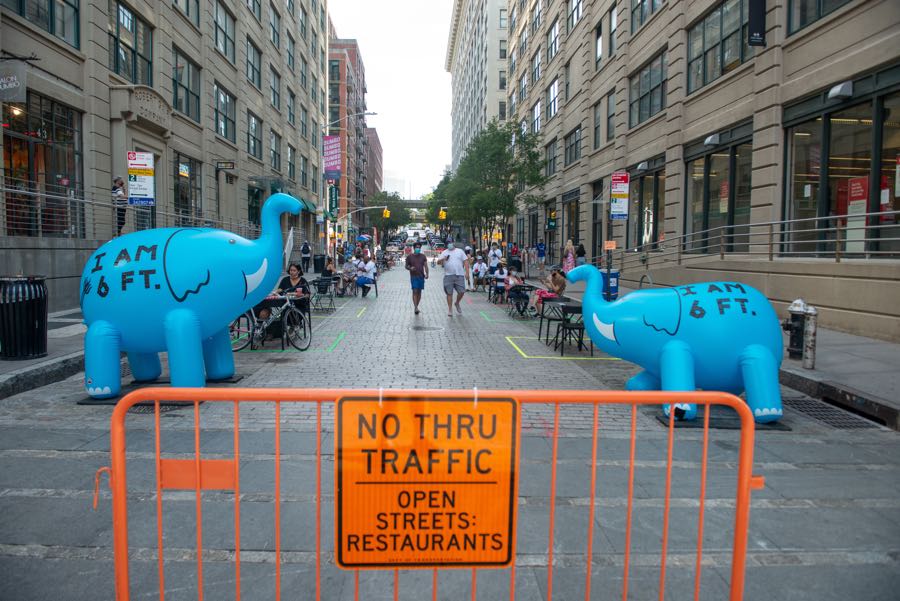 A pop-up movie theater on a side street in Harlem. A touch-less obstacle course for kids in the Bronx. A five-week-long stationary parade in Chicago. Outside Boston, cities have been turning their streets into getaways and gathering places, closing off underused roadways to car traffic and turning them into open-air markets, or setting up workstations for students to use while going to school remotely.

Back at the beginning of the pandemic, I imagined we’d see a revolution in how we treat streets in Boston, at least temporarily. But while we have seen some some very cool things this summer and fall, like new protected bike lanes and outdoor restaurant patios, the city has fully closed very few streets.

Through a spokesman, Boston’s transportation department says it is open to considering street closures in the new year, but for now was more focused simply on helping restaurants and other businesses use space on sidewalks and along curbs. If we really want to give Bostonians more incentive to get outside this winter than chilly restaurant patios, though, time is running out to get creative. It’s not just about providing a break from the work-from-home doldrums, or giving us a safe activities to do at a time when cases are spiking here—much as we’ll need both. Closing down streets and filling them with fun wintry things to do could also provide a needed boost to local businesses that are starving for attention this year.

Take Frisco, Colorado, for example, where a Main Street was converted into a full-on pedestrian thoroughfare, complete with yard games and a mini-golf course. Or Harlem, where a closed street gave neighbors space to throw a socially distanced block party, complete with a pop-up outdoor movie theater. Or look to Denver, where, after the cancellation of its popular wintertime Parade of Lights, officials opted to display stationary floats in the middle of the city during November and December, giving people the chance to walk around and see them on their own time. All great ideas that will get people out of their homes.

Even with everything else going on in the city right now, doing something similar in Boston would not be a heavy lift on the city’s part, and would rely primarily on community groups stepping up. That’s according to Leslie Davol, co-founder of a New York-based nonprofit called Street Lab, which has been bringing kid-friendly programming to NYC streets this summer, including a no-touch obstacle course, community chalk-drawing events, and a WiFi-enabled “homework hub” for students to safely complete schoolwork in the outdoors. New York’s so-called Open Streets program, which set aside 100 miles of car-free streetscapes back in July, hasn’t been perfect, Davol says. Some drivers are upset about losing parking, and some of the officially designated Open Streets in the city have languished without anything special happening on them. The city has largely left programming up to volunteers and community groups. But when they’ve thrived, they have successfully encouraged people to safely congregate in the fresh air.

“Boston should definitely do it,” Davol says. “There are a bunch of streets that are working beautifully here and they’re gorgeous. We’ve seen a beautiful flowering of community spirit of people coming out and doing whatever it takes to reclaim the street.”

Activate the street all weekend. Today, we’ll deploy the no-touch obstacle course and our street marker kit on Pleasant Ave in East Harlem. Thanks @ridespin, @NYC_DOT, @NYCommTrust, and @uptown_grand, showing how how New Yorkers can come together, safely. https://t.co/g6jcszIdB7 pic.twitter.com/LaW3AwWHt2

Jonathan Berk, a Boston-based placemaking consultant and founder of a crowdfunding platform called Patronicity, is hoping Boston’s 20 Main Streets districts might be interested in taking on that role here. Earlier this year, he launched an initiative called Winter Places, which solicited ideas for reclaiming streets in the colder months ahead. In all, 65 submissions came in from both in Boston and around the world, among them proposals to plop outdoor fire pits in the street, set up open-air markets filled with pushcarts, or build “Christmas mazes” made of evergreen trees lighting the path to open storefronts. The recommendations have been compiled into an open-source online guidebook.

“I think what’s lacking in the city right now is an opportunity to create more wide-scale open streets, and I think that’s going to be necessary to continue the success of outdoor commerce in the winter months,” Berk says. “Every neighborhood Main Street district should have the opportunity to have some event space or open street space to kind of get creative, bring people back, and have some space to socially distance.”

Improvements may not need to be that complicated, though, or that flashy. Stacy Thompson, head of Boston’s LivableStreets Alliance says. She suggests a citywide effort to get cars off the streets and into underused parking lots in places like YMCAs and libraries that would free up more space for outdoor social gatherings, and make them more navigable for bikers and pedestrians, thus coaxing more people out of their homes.

“People think we need to create a festival, we need to program something to get people outside,” Thompson says. “People want to go outside. It’s about just giving them the space, and the ability to get there in the first place.”