In the summer of 1982, the rise of Pac Man and Frogger was apparently "terrorizing" the city. 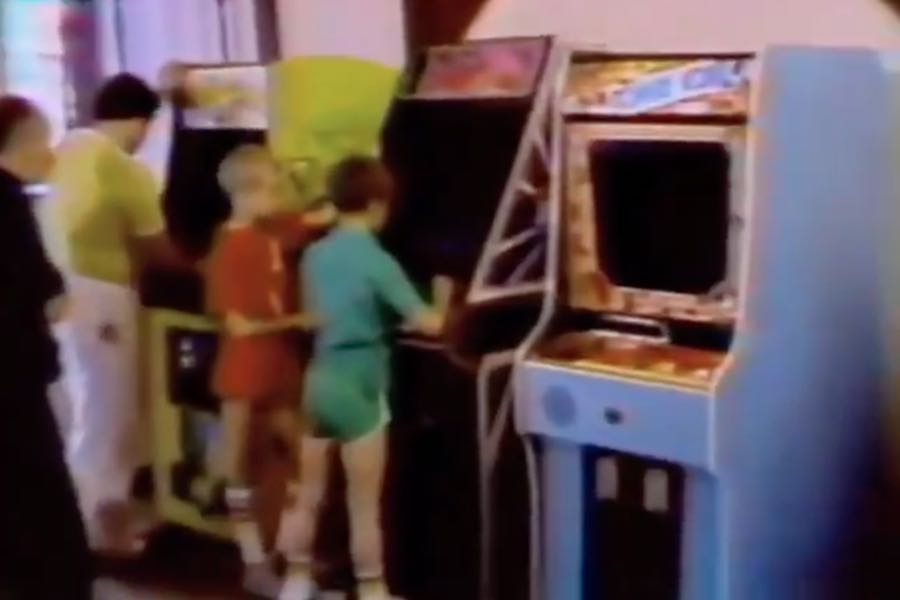 The broadcast begins with a clever quip about our beloved city, delivered in rhyme. “The home of the cod and the bean,” a CBS Evening News anchor says, launching a segment that focused the nation’s attention on Boston, “Now the first American city to zone those damned machines.”

It was the summer of 1982. Ronald Reagan was in the White House. Kevin White was in his fourth and final term in City Hall. And Boston was going absolutely bananas about video games.

A two minute clip of the segment, which offers a hilariously quaint look at this tumultuous period in gaming history, was shared on Twitter this week, and has gained all kinds of attention from snarky online commentators here in 2020, enlightened as we are about the journey those infernal devices would take over the years to come.

“The way officials tell it, Boston has become the victim of an electronic blight,” CBS Boston reporter Steve Young tells viewers in the vintage broadcast, unearthed by the Twitter account Boston Radio Watch. “With fewer than 600,000 people, the city has four to five thousand video games, not just in arcades but also in drug stores, pizza parlors, super markets.”

Believe it or not (and given our sterling anti-fun reputation, you probably do), in 1982 Massachusetts had become the nation’s foremost battleground over the spread of big, boxy gaming systems like Pac Man and Donkey Kong. Agitation among parents about kids swarming mom-and-pop shops and laundromats to dump quarters into the machines had reached a fever pitch, worries abounded about how video games might turn kids into mushy-brained murderers, and talk of banning this new scourge was sweeping the state.

In the middle of all this, the White administration announced a crackdown on arcade games, pledging to withhold licenses for them in areas that weren’t zoned for commercial or industrial uses. It was an effort to tame the video game-playing hordes who were, in the words of then-Boston Commissioner of Licenses Joanne Prevost, “terrorizing” senior citizens at laundromats, and subjecting customers to “fast remarks.”

Not everyone in the segment is on board with the crackdown, of course, least of all an unidentified and overwhelmingly ’80s teen boy who sounds off to a reporter about the virtues of gaming in a word-on-the street soundbite: “You’re always talking about this demeaning—making kids’ minds like vegetables,” he says. “Talk about them out in the streets smoking pot!”

Also featured in the amazing little segment is the owner of a South Boston karate dojo who’d set up arcade games in the dojo’s basement, B-roll of a kid playing Defender while shirtless for some reason, and the head of a trade group called the Coin Machine Industries of New England, who makes the case that the solution to society’s ills is, naturally, more arcade games. “Intoxicating time warp,” the comedian and Marblehead native Rob Delaney said in a tweet about the clip on Friday. “Every detail better than the last.”

You can learn a lot about the past by studying its fixations and anxieties, and it’s especially fascinating to look back at this period now. Who among these Bostonian pearl-clutchers could have anticipated the role that video games, and electronic entertainment overall, would play in our lives 40 years later? Imagine explaining to one of these concerned citizens that the owner of the New England Patriots would one day have in his portfolio a professional e-sports team, which (pre-COVID) was competing for crowds of thousands in arenas. Or that, in the jaws of a pandemic, video games would emerge as one of the few remaining safe ways for teens to unwind and socialize with friends without spreading a deadly virus? Or that these machines would be so beloved by ’80s kids, they’d build trendy arcade bars like Boston’s A4cade and VERSUS so adults could relive those cherished memories while sipping craft beers and cocktails?

Anyway, for those of you who do still have a soft spot for vintage arcade games, know that for a while, all those years ago, Boston made Galaga and Frogger public enemy number one. And as history rolled along, gamers came out decisively on top.