What the Hell Is about to Happen in Boston This Week?

As Boston and every other city prepares for the worst, no one can say for certain what comes next. 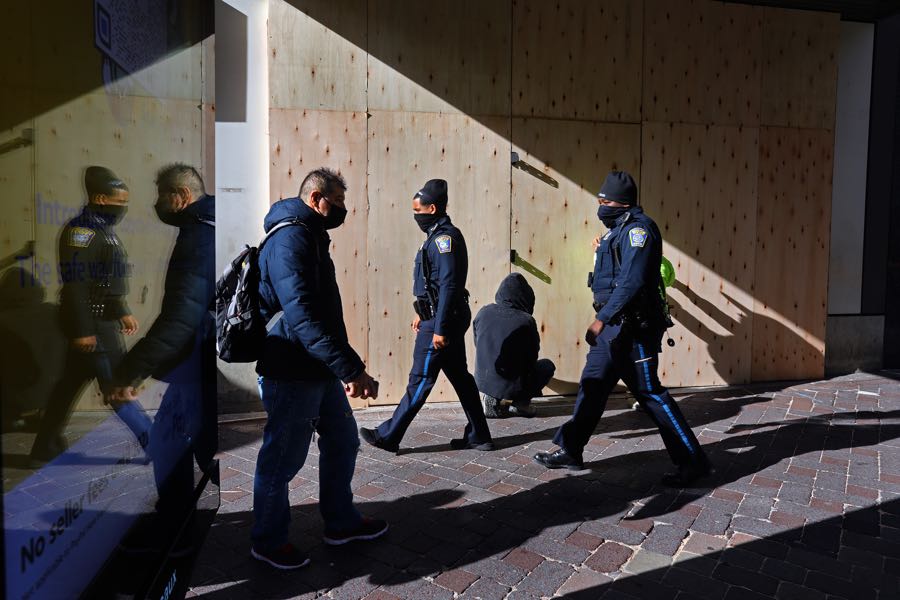 When it comes to the big thing everyone’s talking about today, there is exactly no uncertainty about what is about to happen in Massachusetts. Our state’s 11 electoral college votes will in a short time go into the pile for Joe Biden, or to be fully upfront about the state of things in the bluest of blue states, against Donald Trump.

You’d think that absolute certainty about these facts would provide some level of comfort here in the Commonwealth, at a moment in history when uncertainty—about the pandemic, the economy, our jobs, our families—is like that malevolent spirit in Poltergeist, following us around wherever we go, but more specifically, following us into our own homes. But of course it does not.

This week in Boston, like everywhere else in the United States, we’re preparing for a range of wild scenarios, up to and including some worst case combination of events no one can quite predict that will lead to mass unrest in the streets, possibly…tomorrow?

The likeliest outcome, according to virtually all the pollsters, is that of a Biden victory, possibly even a landslide, and possibly one we’d know about in relatively short order.

There are a few distinct possibilities about how things might go differently, though. The Boston Globe breaks down three of them here: Trump declares victory even though he hasn’t actually won; the final result is an interminable mystery no one can figure out for days or weeks; or the whole thing is resolved in infuriating fashion in a legal battle settled by partisan judges. None of these are good outcomes, and each of them offer some degree of rationale for people to rush to the streets in protest. In fact, activists have been preparing for this possibility for weeks.

Election experts have urged people to be patient and calm about how long it might take for results to be final, and above all else, be prepared with the facts about how results are likely to be reported throughout the hours of Election Day and the days to come in this deeply unusual year.

But local businesses are taking no chances about the possibility of tense protests escalating. In preparation for a convulsion of anger of one kind or another, giant plywood boards have returned to buildings downtown. The Prudential Center was among the first to take that ominous precaution. Much of Newbury Street and Downtown Crossing has done the same. Businesses have said they don’t expect a repeat of this summer’s protests after the death of George Floyd, but they are reluctant to take any chances.

You’d swear Downtown Boston was ready for a war with how everything is boarded up (again) @universalhub pic.twitter.com/eH8hLDg1XA

Several Downtown Boston businesses and companies have begun boarding up their windows in preparation for potential demonstrations, criminal activity, and/or disturbances within the city associated with the results of the 2020 Presidential Election. pic.twitter.com/In4PErKvo3

As of Monday, thanks to an executive order from Charlie Baker, 1,000 members of the National Guard have been put at the ready in case anyone needs more cops or armored vehicles than we already have. And nationally, anxieties are extraordinarily high about mass protest no matter who wins, or when. Some officials told NPR they’d been preparing and gaming out the post-election possibilities for months. Boston has done the same in recent days, even as Mayor Walsh has stressed that there are no specific threats to the city. “There’ll probably be demonstrations on both sides, on victories and losses,” Walsh said last week, adding, “What’s kind of alarming to me is that the preparation that we’re putting into this election, we’ve never had to put into an election before. I don’t think any mayor before me, or I certainly wasn’t asked in 2016, ‘What’s your election safety plan?'”

People could also gather in the streets this week—to celebrate, perhaps—without any violence or destruction at all, as has been the case at the overwhelming majority of the hundreds of demonstrations in the state this year. It’s possible none of the worst things will come to pass. We’ve been pretty bad at predicting just about everything these past few years, so maybe all our nerves are for naught. Even that, in and of itself, is maddening—all these jitters, over the infinite twists the coming days might have in store, could be for a catastrophe…or they could be for nothing at all.

But the feeling of dread remains, and when the uncertainty will subside is itself uncertain.

In the meantime I just bought a bag of mini Halloween candy bars at CVS and will almost certainly eat the whole thing in just a few short hours.