It's not easy being the guy with the crystal ball in a presidential election, even when you get it right. 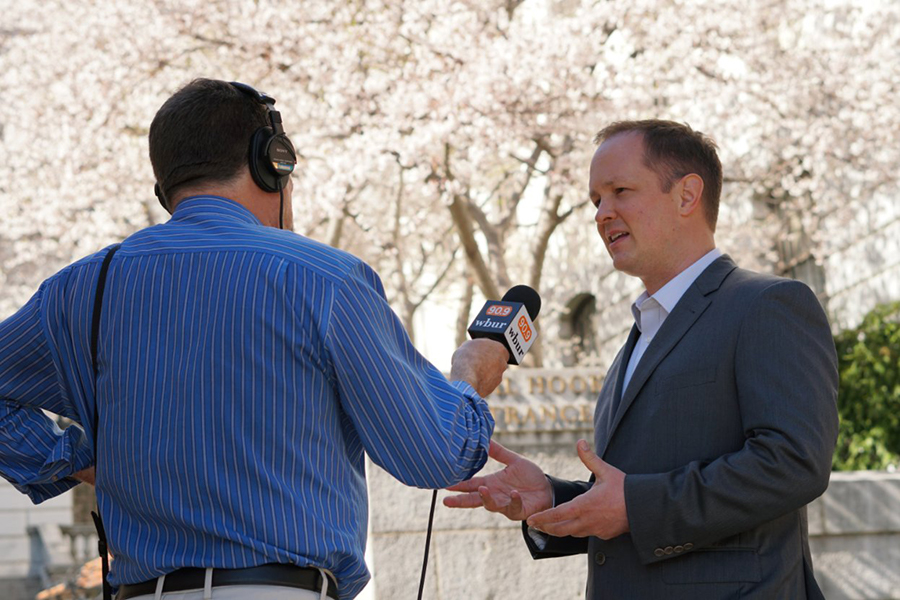 It’s Friday morning, day four of Election Night 2020, and Steve Koczela is watching the chaos unfold much like the rest of us: by staring ceaselessly, and nervously, at screens.

As we talk over the phone, the president of Boston’s MassINC Polling tells me he’s got not one but four separate news broadcasts streaming on his computer, trying to let the slow trickle of swing state votes wash over him all at once.

There is always additional stress weighing on the mind of the man who is perhaps the Commonwealth’s best known vote-predictor. Typically for a pollster, months or even years of polling all build up to the final moments on the first Tuesday in November. “You have two hours of terror between when the polls close and when you know what actually happened,” he says. “When you’re feeling just total professional, existential terror.”

In 2020, however, the feeling has been stretched, maddeningly, for days. Across the country, just as they did before the president’s huge upset win in 2016, pollsters appear to have gotten it wrong. Never mind that, bucking the national trend, Koczela largely got it right. MassINC’s polling showed Biden with a 34-point lead in the Bay State, and he’s about to finish up by 33 points. It also predicted Massachusetts voters’ ambivalence about a ballot question on ranked choice voting, which was defeated this week by 10 points.

The situation has put him in the unfortunate position of defending the profession at a time when it appears to be at yet another crossroads.

“I’ve gotten a lot of calls from reporters asking why the polls were so wrong,” he says. “But we did fine! That’s like if I call the local reporter to ask him why the New York Times got a story wrong and criticize them for not doing a better job. …  It may look like I hang out down the street with the pollsters from Marist and Quinnipiac and Sienna, and we all have a club, and the truth of the matter is, we all work differently. We all work separately. We’re all independent and individual groups. So I don’t really know what went wrong there. In addition to not having the data, I think it’s just going to take some time for each pollster to assess what happened.”

There are stories to tell about pollsters who know their areas and keep doing good work over and over again, May not be as cool as the 50 state mega polls or national media hitting 10 states at a time. But we’ll keep doing what we do.

Poll aggregators like FiveThirtyEight seemed to point to a smooth path to victory for Biden, with Democrats reclaiming the Senate and increasing their majority in the House. While Biden’s potential victory looks like it may very well be a big Electoral College win, it’s been a painstaking process to get there, and many Senate and House races went the opposite way polls suggested. The fallout has led to new waves of anti-pollster outrage and hysteria. Tucker Carlson, in full Tucker Carlson mode, has called for pollsters to be fired en masse.

With a successful round of polling behind him, though, Koczela isn’t gloating, or distancing himself from his national comrades. Instead, he is once again urging us all to be patient and clear-eyed about his field. Much to the consternation of the news-consuming public, it will probably be weeks before we know exactly how right or wrong the polls were, and months or years before we know what might have gone wrong. “It’s clear that the polling community needs to figure out what happened in 2020,” he says, “and I think there is probably going to be a lot of criticism that’s warranted.”

In the meantime, he says, we should focus on what went right. Pollsters, after all, did accurately predict Georgia would be closer than usual—and Biden appears slated to win it narrowly.

He is also, for maybe the millionth time, hoping to impress on people a few things. One, that polls are merely a snapshot in time, and are thus fallible. And two, just because a pollster says the odds of something happening are high, it does not mean the less likely outcome is impossible.

But in the bigger picture, he hopes that two straight polling flubs in national elections serves as a reminder that polls do a lot more than predict who’s about to win. MassINC’s polls have been packed with data about how voters feel about issues, and how those opinions change over time. For example, polls here showed that as of August, a large chunk of voters were both confused about what the benefits of a ranked-choice voting system might be, and undecided about how to vote. And while support for Question 2 grew between then and now, it didn’t increase by enough. That suggests ranked choice advocates need to do a better job of explaining the complex system in the future if they hope to try implementing it here again. That’s a level of insight that isn’t possible without polling, he says.

And for everyone who’s feeling spurned by national pollsters, he wants to remind us that there simply is not a good alternative available for widespread polling. All the gut feelings or shoe leather reporting in the world can’t compensate for a well-run poll.

“You can’t get a systematic understanding of what’s happening across a broad area with millions of people by just going to diners and just going to town squares and city halls and public meetings and looking on social media. There’s just no way to really know where the voices that you’re listening to fit in, and that’s what polling at its best is designed to provide,” he says. “So I don’t think survey research as a whole is going anywhere. It is very possible that the relationship between political media and political polling will change.”

In a normal year, the days after an election provide pollsters like Koczela some much-needed time to mellow out. But not this year. As we speak, MassINC is preparing to release yet another poll, this time on how families are dealing with pandemic-era school closures. The results could help guide decision-making about education at a time when the pandemic has caused chaos for students statewide. All while feverishly watching the nail-biter results roll in, and watching his craft once again go through the post-election wringer. There ain’t no rest for a pollster.