As Election Euphoria Fades, a Weary Boston Asks: “Now What?”

Optimism after Joe Biden's victory is getting tempered by the challenges at hand. 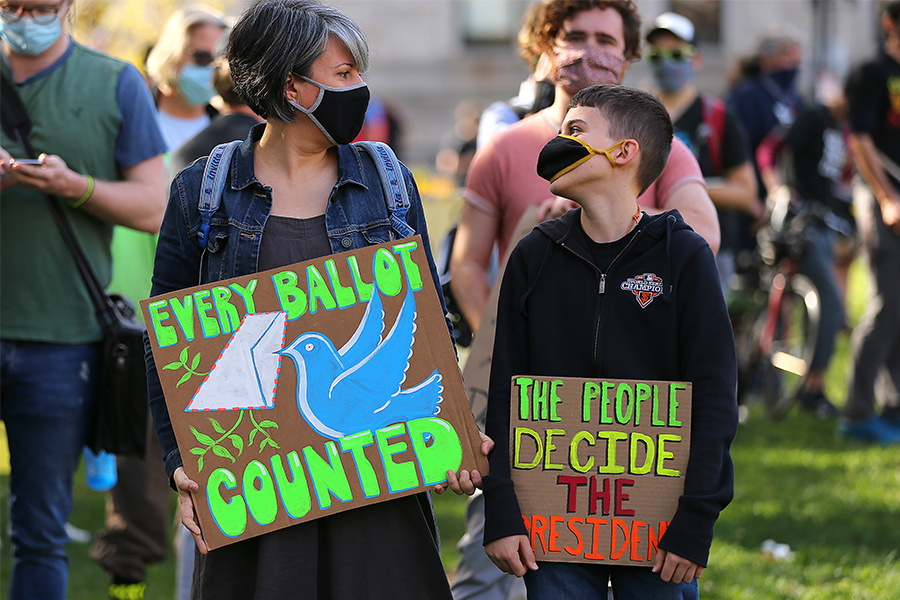 People hold signs reading “every ballot counted” and “the people decide the president” during a worker’s rally in Copley Square in Boston just after Joe Biden was declared the President-Elect in Boston on Nov. 7, 2020. Photo by John Tlumacki/The Boston Globe via Getty Images

Tiffani Faison spent most of her Election Week in deep-red Tennessee. The chef and restaurateur was filming new episodes for Food Network’s Chopped, and on her way to work in the morning, she would drive past pick-up trucks decked out with multiple Trump flags. When the election was finally called for Joe Biden and Kamala Harris by many news outlets on Saturday, Faison was in transit to Boston. Her plane was silent, as was Charlotte Douglass International Airport, where she’d caught a connecting flight. Then she finally touched base in Boston, where it took her an hour and a half to get home from Logan, due to all of the celebrations in the streets. “It felt like I was truly home,” Faison says.

Unsurprisingly, Boston overwhelmingly voted for Biden, with the President-Elect receiving 82.5 percent of the vote in the city. When Biden overtook Donald Trump in Pennsylvania Saturday, the streets were filled with masked and spontaneous partiers, including actress Jennifer Lawrence, who ran around in her pajamas cheering. But now, Trump is refusing to concede, and many elected Republicans are going right along with him. On top of that, our country is entering its worst phase of the pandemic, and Charlie Baker is talking about plans to resurrect COVID field hospitals. Yes, most of us are happy that Biden won. But now what?

For Kimberley Ring Allen, life doesn’t feel any different. Fighting to keep her marketing business alive during quarantine and teaching three classes at Suffolk University has kept her scrambling since March, and the pace hasn’t subsided. She’s hopeful we can put the election behind us and start working to finally curtail the pandemic. But the last nine months don’t give her much optimism. “I don’t feel at ease one way or the other, and I haven’t in a very long time,” she says. “We don’t know what else to do, because we’re so angry and so upset that it’s got to be somebody’s fault. But I don’t look at it that way. It’s just shit.”

It’s been shit for most business owners in the city during the coronavirus pandemic, and a Biden presidency won’t automatically change that. Setting up a COVID task force with actual scientists—many of whom have Boston connections, naturally—is an encouraging start. But that’s just the first step. More stimulus needs to be passed, and quickly. “If we have a definitive win in the Senate, we have all of these funding packages that are already locked and ready to go for small businesses. That gives me all of the hope in the world,” Faison says. “But that takes Mitch McConnell getting the fuck out of there. It just can’t continue like this.”

Matthew Shochat feels the same way. The Dorchester resident has been looking for work throughout the pandemic and drained most of his savings. Job hunting in the midst of a global pandemic and economic depression can feel like a futile endeavor, and COVID restrictions make the demoralizing process even more challenging. Shochat was forced to purchase his own computer this year, due to access changes at the Boston Public Library. He doesn’t know how much help Biden can deliver, but at least feels like the incoming administration will try to help. “The response to the pandemic where [Trump] lets the states do whatever they want is not a response,” Shochat says. “I’m more confident that a Biden Administration will actually get anything done compared to the Trump Administration in terms of helping people.”

And for those unlucky enough to have tried to open a business in 2020, the current morass is all they’ve known. Kobie Evans opened his pot shop Pure Oasis in Roxbury just days before being forced to shut down during the early months of quarantine. While business has been steady since he reopened, he and his partner expected to be busier, and at this point, he’s craving stability. “We, as Black business owners, get hit the hardest, and we get hit first,” he says. “We need some sort of intervention on a national level to try and stem this tide of economic disparity.” Evans, who set up a voting drive at his store, is more confident Biden will accomplish that than Trump. “(The election) was a referendum on the need to participate in a democracy,” he says. “When you don’t, you get people like Donald Trump. When you do participate, you get people like Joe Biden.”

David Lopes teaches special education at Charlestown High School, and says he’s elated at Biden’s win—and not just because Biden has pledged to pick a teacher for education secretary. He thinks Biden is a compassionate person. “I know this may sound cliché, but I feel as though the President-Elect actually cares about me: an African-American gay educator,” he says. And even progressives are finding reasons for optimism—Paul Weiskel, who describes himself as “pretty far left,” wasn’t expecting to feel anything when Biden won, but the teamster is glad to say he was wrong. “You see all of the people in the streets,” he says. “On one hand, I’m like, ‘Man, I really wish we had the Green New Deal and a real hardcore leftist as president.’ But lives are going to be significantly better because Trump is out of office.”

LGBTQ advocate Jordan Meehan is quick to point out there are still many pressing local issues to address, including a looming eviction crisis and a beleaguered MBTA, which just announced drastic cuts. “Death, taxes, and the broken MBTA are the constants that will always be here no matter who’s the president,” he says. Still, even in today’s bitterly divided era, the president has the power to set the nationwide agenda. Advocates can now play offense, rather than always playing defense.

That excitement is tempered by the knowledge of what’s to come, though. We are facing a dark winter here in Boston, and more than 1 million COVID cases have been recorded nationwide over the last two weeks. Those hoping for drastic changes in the handling of the pandemic have a few more months to go, and Trump’s refusal to accept Biden’s win isn’t helping to alleviate anxiety. But one thing is for sure: For the overwhelming majority of Bostonians, the current scenario is better than the alternative. “For a couple of days, my shoulders felt a little lighter,” Faison says. “I remember waking up the next morning and really feeling like the sun had come up in a way that felt less dark and more hopeful.”