Back-to-Back Earthquakes Are a Reminder: Massachusetts Is on Shaky Ground

Quakes like the 3.6 magnitude one outside New Bedford can, and will, happen again. Maybe soon. 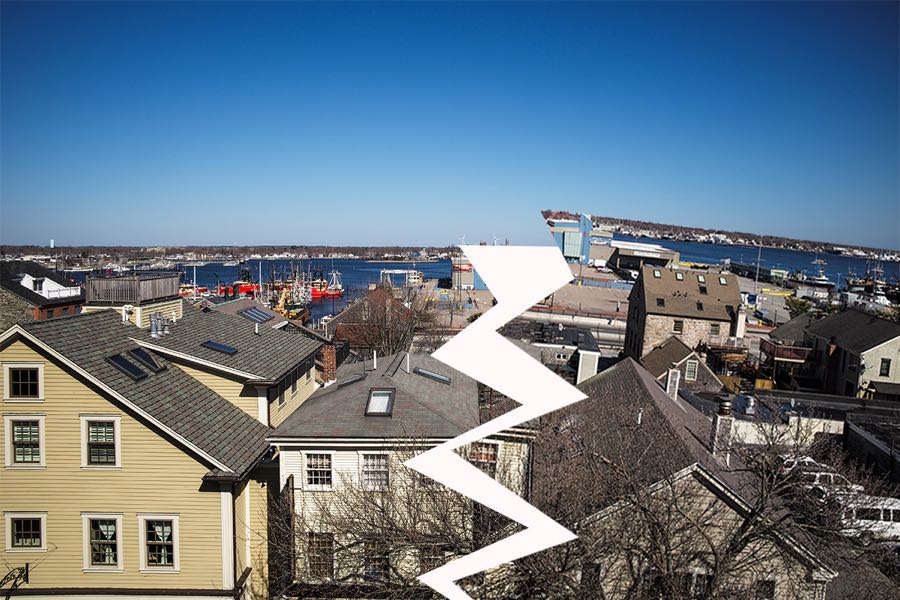 If you’re the average Massachusetts resident, earthquakes are probably about the millionth thing on your mind—especially, you know, right now. But after a pair of them shook the South Shore this month—first, a rumbly 3.6 magnitude quake on November 8, followed by a gentler one registering a 2.0 on the Richter scale on Sunday—experts on the geological phenomena hope Bay Staters will take some time to acknowledge the truth: We are not immune to earthquakes up here in the Northeast, we never have been, and another, possibly more powerful one, could always be around the corner.

The first earthquake was something of an anomaly. Traced to a spot under Buzzards Bay, it rattled homes in New Bedford, displaced 20 people, and could be felt as far away as Long Island. No one was injured, and property damage was minimal, according to the Massachusetts Emergency Management Agency, which says it documented just a few broken chimneys. But it was among the most powerful quakes ever recorded in the state, and the biggest one seen in the region in a decade, since a magnitude 4.0 quake in Maine in 2010. It may not be the last.

“It’s just another reminder that we do have the potential for earthquakes here in Eastern Massachusetts,” says Dr. John Ebel, seismologist and senior research scientist at Boston College’s Weston Observatory. “And any place that you have small earthquakes, there’s a potential that a large earthquake could occur.”

For example, Ebel points to the precedent set in Quebec in 1988, when a 4.7 magnitude quake preceded a much more powerful 5.9 magnitude one a few days later. But before you start conjuring new reasons to panic buy groceries this year, he says it’s pretty unlikely we’d see something similar here, and described this month’s most recent quake as a fairly run-of-the-mill aftershock that is more or less to be expected.

Still, there’s always the potential for stronger movement below our feet, and history proves it. Back in the early 1700s, Massachusetts saw two fairly severe earthquakes. The first, in 1727, is believed to have been roughly a magnitude 5.6 and centered around Newburyport and Amesbury. And then in 1755, there was what, by regional standards, could be described as The Big One: a serious quake that’s estimated to have been about a magnitude 6.3. Dubbed the Cape Ann Earthquake due to its origin 20 miles off the coast of the North Shore, the incident caused widespread damage to chimneys in Boston, sent piles of bricks clattering onto the streets, and badly deformed the tower atop Faneuil Hall, says Ebel, who in 2019 wrote a book on the region’s geological history called New England Earthquakes: The Surprising History of Seismic Activity in the Northeast.

We can still hear echoes of that history in our state’s building codes, which since 1975 have required that new buildings be constructed to withstand a 6.3 quake. In fact, contractors in the state spend a lot more time thinking about earthquakes than you’d think, and Ebel regularly gives seminars to them about the ramifications of more quakes. Which very much could occur: Earthquakes over the past several decades have been recorded in communities surrounding Boston, such as Littleton, Acton, Chelmsford, and Lowell. There’s no reason to believe those areas couldn’t see a big quake at some point in the future, and every reason to believe they will.

Interestingly, Ebel says that much of the city’s wood-built housing (think, the three-deckers emblematic of many Boston neighborhoods) would do particularly well if another Cape Ann Earthquake struck. That’s because wood bends and sways in earthquakes. Except in extreme circumstances, or due to other structural flaws like a faulty foundation, they tend not to collapse.

Despite all that reassurance, Ebel and other experts say they hope the pair of shaky mornings experienced in New Bedford are a reminder that we should all spend some time preparing for the dangers associated with an earthquake, like, say, heavy objects clattering off of shelves or crummy roofs buckling in the sway. They’ve been pushing Massachusetts schools to add earthquake readiness to their periodic lesson plans, alongside fire drills, and encourage participation in earthquake awareness campaigns. One example is the annual International Shakeout Day in October, which encourages people to play out an imaginary earthquake scenario in their own homes and identify the safest places to wait out the shaking, such as under a sturdy table.

State officials quietly prepare for the worst-case scenario, too. While MEMA does not plan specifically for earthquakes, it includes them among possible incidents in its “hazard planning” protocols, meaning it knows how to set up responses to events that cause widespread damage to homes, like fires or serious storms, according to agency spokesman Chris Besse. He says the state is not on higher alert after this month’s quakes, but is ready to respond just as it is for any unforeseeable catastrophe. The state also maintains a list of earthquake safety tips on its website, with advice on what to do before, during, and after an earthquake.

Massachusetts, of course, isn’t under nearly the same threat as our neighbors out west, particularly in California, where quakes at 3.6 magnitude or above happen every few days. But while Californians are well-versed in earthquake preparedness, we tend not to be. That may be the wrong attitude to have, says Don Blakeman, Colorado-based geophysicist with the U.S. Geological Survey. “These kinds of earthquakes can happen pretty much anywhere at any time,” Blakeman says. “I know that a 3.6 is a little larger than what you typically see in Southern New England, but it’s not all that unusual seismically.”

Overall, New England quakes remain sort of a mystery. Scientists have yet to pinpoint the fault lines that might be fueling the region’s shaky grounds, even as events like we just saw in New Bedford provide new data to study. And experts certainly can’t give us a heads up about when they might happen. So the least we can do is be at least somewhat aware of the threat, however remote it might be. “I can’t predict earthquakes any more than anyone else can,” Ebel says. “It’s a really hard problem, and no seismologist that I know of anywhere in the world has really made much progress. There’s been some progress made, but not much. I’m jealous of the weather people. They can look up in the sky, they see the clouds coming in and can say, ‘OK, there’s a chance of rain.’ We can’t see down into the earth. We can’t see the cracks come. We can’t see the earthquakes coming.”