They’re taking advantage of the wide-open spaces during the pandemic—and driving up housing prices in the process. 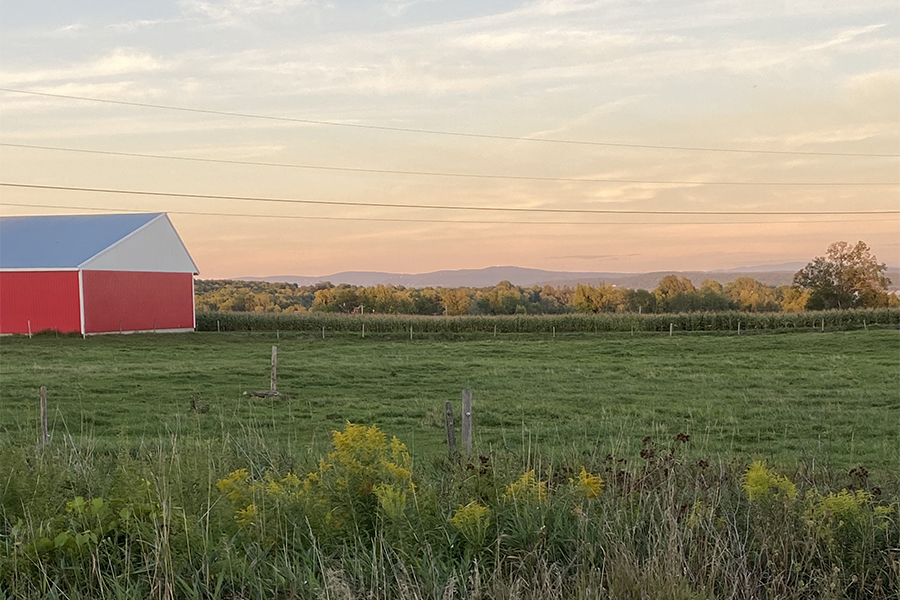 The man in the yellow Subaru was not happy when he spotted my Massachusetts license plate. My wife and I were parked outside the farmer’s market in South Hero, Vermont, one of four northern islands in Lake Champlain near the Canadian border. I couldn’t hear the exact words, but through his wildly gesticulating hands and angry looks, the message seemed clear: “They’re coming from Massachusetts and bringing COVID with them!”

We were actually just looking for heirloom tomatoes.

He was clearly right about the Massachusetts part, though. Just a few hours away, Vermont has always pulled at my heartstrings. A lifelong Bostonian, I once had a ski house near the slopes of Sugarbush, and it served as an ideal escape from city living. I’ve long said the trick to loving Boston is leaving it one weekend a month—it always looks better on the return.  But there we were, part of a diaspora of “flatlanders,” as non-Vermonters are called, hoping to seek refuge from the pandemic in the country’s second-least-populated state and the place with the lowest COVID rate per capita (last I checked, Massachusetts was six times higher).

What my wife and I discovered was that we were hardly alone. Across Vermont, a state whose entire population is just slightly less than that of Boston, a mad hunt for housing is underway. Real estate brokers are describing their busiest year ever, with record sale prices. Builders aren’t returning calls. Vacation rentals are full, and hotels are booked. In short, Vermont is on fire.  What had previously served as a respite for urbanites and suburbanites alike—trips to craft-beer breweries, penny candy at the general store, nights by a warm fire—has instead become “Plan B” for thousands of Americans. So much so that the New York Times ran a story documenting the crush of newcomers to Vermont that referred to them as “COVID refugees.”

The reasons for this latest influx have everything to do with the coronavirus pandemic. The widespread embrace of remote work for many white-collar jobs is freeing people to live where they’ve always dreamed, even if just for a year or two. Of course, with its wide swaths of land and progressive political environment, Vermont has become an ideal destination for people from New York to Napa Valley. There’s also the growing thought among climate scientists that populations in the northern regions of the United States will increase by around 10 percent as more people factor in climate change when deciding where to live. More than one real estate professional told me they were seeing record numbers of Californians relocate to Vermont on account of the incessant wildfires.

This isn’t the first time that the winds of change have blown new residents into the Green Mountain State. In the 1960s and ’70s, the so-called Back to the Land movement brought an influx of disaffected young people in search of a freewheeling lifestyle, away from the restraints of mainstream America, looking for a chance to reboot society in the form of communes and shared farms. That wave carried tens of thousands of people into Vermont each year, mostly hippies, and included notables such as Bernie Sanders and up-and-coming ice cream moguls Ben Cohen and Jerry Greenfield.

What seems different this time around is the sheer panic and intensity of it all. Rather than absorbing new residents over a period of years, towns have been invaded en masse in only a matter of months. The number of people who are migrating isn’t quite clear, as Census data is not yet available. By May 2020, though, the number of available short-term rental listings was down about 25 percent from the previous year, likely the effect of second-home owners choosing to make their investment properties their primary residence, according to AirDNA, a company that monitors rental data. One real estate broker told me there were no condominiums left on the market in all of the Mad River Valley. By mid-summer, the state estimated that the number of net-new people was around 10,000, and Vermont’s weekly publication, Seven Days, reported that requests to forward mail from out of state into Vermont had increased by 70 percent over the previous year.

The pandemic, of course, isn’t the only reason that people are fleeing north. For many Bostonians, there is an additional metric that is driving them away, one of the city’s own making: the precipitous rise of the cost of housing. For Nicole Fichera and Tyler Shannon, two South End residents who as adults have only known urban living, the decision to move to a remote part of the world was both financial and philosophical. Each are in their thirties but still find the prospect of purchasing a home near Boston out of reach. After years of looking in the city, and then further out in Medford, Everett, and even Providence, Rhode Island, they became frustrated with their options. “There’s no entry point for us here,” Fichera told me.

With COVID making a small Boston apartment even less appealing, they decided to get creative: They made an offer on a property, “sight unseen,” in a place they’d never even visited. The home is a stunning five-bedroom wooden Colonial, built in the 1840s and recently renovated. From their window, they gaze out at the pristine waters of Lake Champlain and the soaring mountains beyond. The catch? It’s located in Alburgh, Vermont, a town that shares a border with Canada and whose population was 529. It’s now 531. 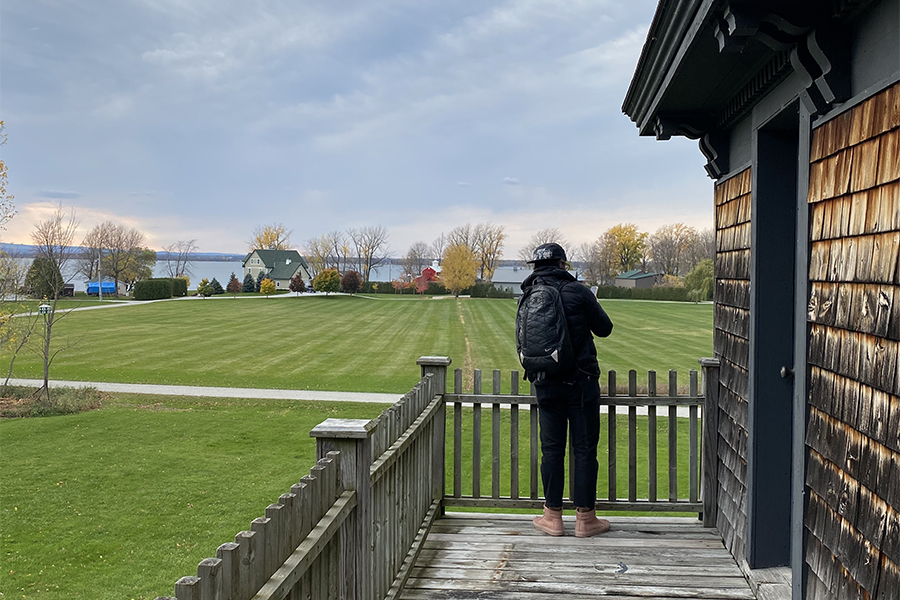 Tyler Shannon in Alburgh, Vermont, gazing across his new property toward Lake Champlain and the mountains beyond. Photo by Nicole Fichera

To Fichera and Shannon, that’s part of the appeal. Fichera has long dreamed of creating an incubator for artists and creative thinkers. Her idea is to create a community for creative people looking for a place to free their minds. Where better than in a picturesque wonderland away from the daily distractions of the city? Their current plan is to make part of their home available to others, luring them to the quiet remoteness. Here, where the cost of real estate is a fraction of Boston’s, she can actually live out this dream. “I think this year has forced a lot of people to examine assumptions in a new way—what our life and work needs to look like,” she said.

Similar instincts drove Jake Thomas and his wife, Allie, who lived in Cambridge and later Somerville for 14 years, into the great north. In the spring, they decided to move with their four-year old son, Finn, to Peacham, Vermont, a breathtaking hamlet known as much for its farming and agriculture as for the intellectuals it attracts. The town is a long way from the bike paths and hipster bars of Union Square. In fact, it’s a long way from everything, which is part of the appeal. “You can’t just go and Google things around here,” Jake told me. “It’s very much word of mouth that you otherwise wouldn’t be able to find out any other way.”

Like Fichera and Shannon, they have found the financial freedom that comes with the move as a source of empowerment. “I feel like we can do more with money here,” Thomas said. “We can make some choices that will really impact the community in a certain way and choose to spend our money much more locally.”

Still, the influx of people from Massachusetts and beyond is not without its challenges—especially for the existing residents of these small towns. Mike “Spike” Brodeur, whose grandfather was born in what is now Warren, Vermont’s Pitcher Inn, says the new people are hard to miss and ruffling feathers. “Of course there’s blowback,” Spike told me of his fellow townspeople’s reaction to the COVID migration.  “A lot of things local folks take for granted, they’ll have to get over.”

For his part, that includes his own daily life. For the first time he can remember, his local golf course recently had no tee times available, his local fishing hole along the Mad River was discovered by out-of-towners, and he finds himself waiting a bit longer to turn onto Route 100.

Pressures from flatlanders can be more than just an inconvenience, placing the most fundamental of life’s necessities–housing–out of reach. Zillow predicts that next year’s home costs will rise 25 percent over what they were just five years ago. For a state that is not prone to volatile real estate prices, this is a wild swing. Given that housing is in short supply, and zoning laws restrict density, the soaring costs mean existing residents could begin to get squeezed out.

The situation is a far cry from a mere year ago, when Vermont was literally paying people to move there. In 2018, the government began incentivizing people with up to $10,000 a head to move to the state and work remotely. In early 2020, the legislature authorized another round of funding to continue the program, which had brought nearly 300 new citizens to the state, but by then it was no longer needed—the crush of new residents fleeing cities had rendered it irrelevant.

Whether this migration to Vermont continues in the wake of a vaccine next year remains to be seen. Spike has his own opinion on the subject. “Right now, there’s a big romance for this area,” he said.  “But in March, while you’re in Boston barbecuing, here in Vermont it’s still snowing 2 feet and is below zero.”

Perhaps—yet Bostonians like me are still drawn. Since that day at the farmers’ market with the gesticulating local, my wife and I found a property in North Hero, one of those Lake Champlain islands. It’s beautiful up there. Whether for an escape or a reboot, it will broaden our own opportunities. We will be about 20 minutes from Fichera and Shannon, who have become close friends. The duo tells me they’ve traded in their sedan for an all-wheel drive SUV. On the northern edge of the United States, they’ll certainly need it.