The Latest on the Nor’Easter Headed Toward Boston This Weekend

Snow totals are a moving target for forecasters as the storm closes in. 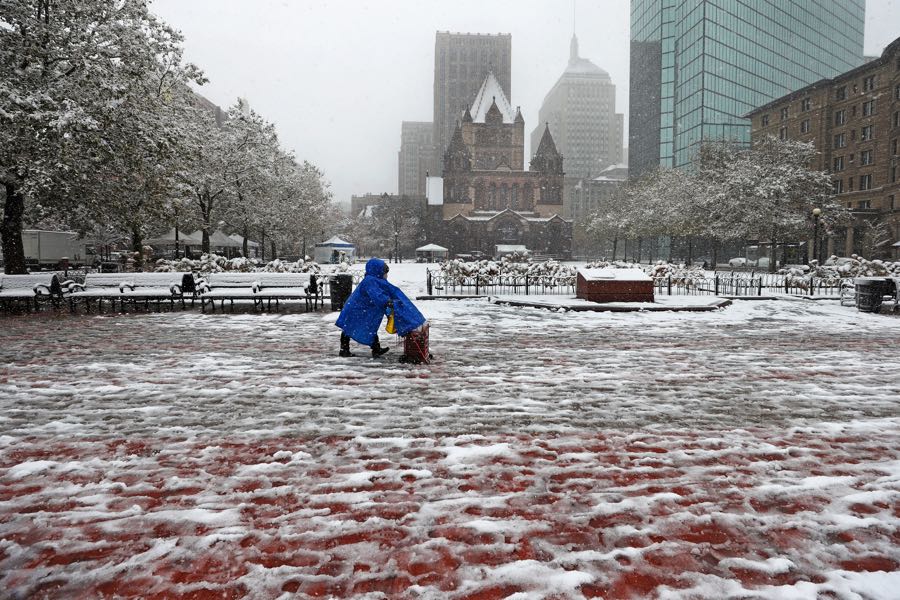 All was calm and quiet, and relatively warm, on Friday afternoon in Boston. But it won’t stay that way for long. Forecasters say a nor’easter is forming off the East Coast, and will soon bring some angry precipitation to the city.

Rain and gusty winds are expected to hit the Boston area as early as Friday night, with temperatures in the mid-40s. Then, as the storm begins swirling through the rest of the state, an onslaught of rain is forecast to at some point turn to snow if temperatures drop enough low enough, according to Bill Simpson, meteorologist with the National Weather Service.

[530 AM 1 of 2] We are still expecting an impactful #winter storm across S New England this Sat. Rain changes to #snow on Sat afternoon into evening with significant accumulations possible. Snowfall rates could reach 1-2 inches/hr with difficult travel & scattered power outages. pic.twitter.com/m6sfb4intm

The winds will be blowing in from the northeast, hence the nor’easter moniker we all know and love. But there is still some uncertainty about how this all will play out, in part because the storm is still in its early stages and because it’s expected to happen at temperatures right around, or just above, freezing.

“You can go from rain to snow,” Simpson says. “Depending on the intensity, the precipitation can be mostly rain or you can get a really heavy downburst and it can switch over back to snow.

Further west, cities and towns in Massachusetts are likely to see a much thicker coating of wet, dense snow, which may end up falling as rapidly as two to three inches an hour, particularly in areas like the Worcester hills.

Outside of Route 128, NWS is warning of the possibility of power outages due to heavy wet snow.

[Wet Snow/Power Outage Concern Saturday] Rain changes to wet snow across much of the region Sat. A band of heavy wet snow expected, but still need to fine tune the exact location. Risk for scattered power outages and some downed trees with the greatest risk across central/NE MA. pic.twitter.com/n0IKL82fcK

Here in the city, the NWS’ best guess is that we’ll see somewhere between two and three inches of snow, although it’s likely to be too warm for snow to accumulate.

So all in all, as we kick off this delightfully snowy season, I’m afraid you won’t be able to take your sleds out of storage just yet.

“It’s gonna be a pretty heavy wind-driven rain. So if you can avoid traveling it makes sense regardless of if it’s rain or snow,” Simpson says. “Everyone’s focused on the snow amounts, but in Boston it’s mostly a heavy rain event, up until the almost the last quarter of the event. And we’ll have wind gusts up to 50 or maybe even higher. So it won’t be a very pleasant day.”