As COVID Cases Climb, the Honor System Is the Law of the Land in Massachusetts

While we wait for the vaccine, we’re relying on individuals to do the right thing. 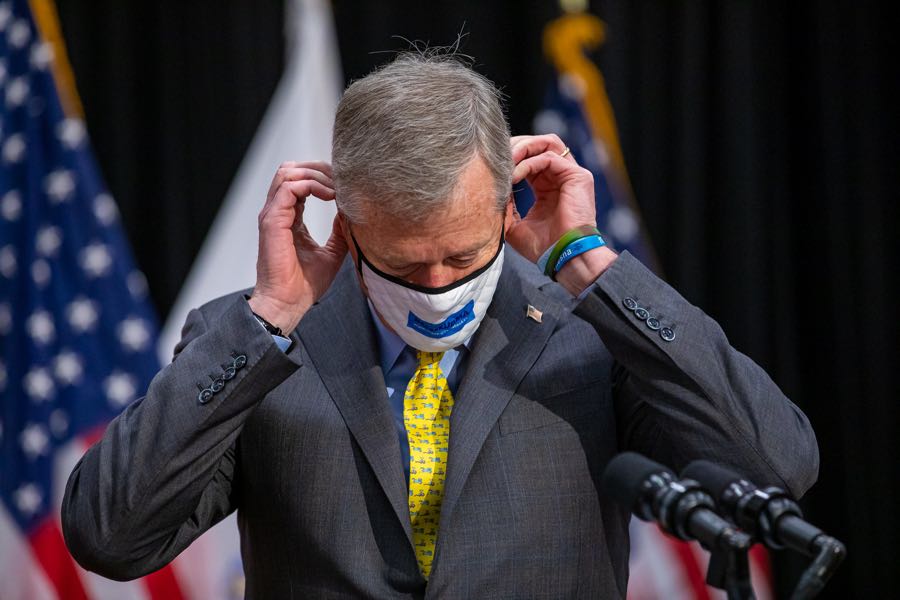 When Gov. Charlie Baker opened his press conference Tuesday afternoon to unveil the state’s newly re-tooled approach for handling the latest coronavirus surge in Massachusetts, he did so with a story about a fateful dinner date his friends (nearly) had at a restaurant.

It goes like this: His friends had planned to meet up with some former contacts they hadn’t seen in a while for a meal on an outdoor patio but, when they arrived, the patio was full. Offered a table indoors, the governor’s pals declined, and took some grief from their buddies for doing so. Then five days later, they learned their friends had tested positive for COVID-19, and that they’d narrowly missed possibly getting infected themselves.

The moral of the story, Baker seemed to say, was that his friends had done the right thing, following state guidance that discourages gathering indoors with people outside one’s household. There are no official restrictions that prevented his friends from succumbing to peer pressure and eating inside, of course—indoor dining at restaurants is still allowed, even now, as the number of cases spike to the highest levels we’ve seen since spring. In the end, they made the responsible choice on their own.

It’s noteworthy that this is the anecdote the governor chose for this moment, as the state issues its latest guidance in response to an outbreak that has swiftly grown out of control. And it perfectly sums up the state of affairs in Massachusetts: If anyone thought that more help was coming—that a robust stimulus package might enable the state to enact a widespread lockdown, take risky indoor activities entirely off the menu, and give an overheated public health crisis time to cool—it is not. Instead, when it comes down to it, it appears that managing the state’s outbreak will depend on residents making correct choices over and again until the moment those vaccines start to kick in.

The honor system. That’s where we are. But we didn’t get here by accident. State officials find themselves in a more or less impossible position when it comes to balancing public and economic health: Epidemiologists have pleaded for an end to indoor dining, for instance, but what would happen to the thousands of restaurants and tens of thousands of food service workers if dining rooms suddenly went dark without a lifeline? Stalled stimulus talks in Congress could inject more aid into the economy soon, but nothing near what would be required for a full-on shutdown.

Instead, all we can expect as case counts soar is some tinkering with the rules. Beginning Sunday, when the state downgrades to “phase one” of “step three” in its reopening plan, businesses will need to scale capacity back from 50 to 40 percent, new rules will require increased masking in gyms and eateries, and the maximum size for outdoor gatherings will be reduced from 100 to 50. Some high-touch recreational activities, like trampoline parks, will have to close. But for the most part if you still really want to eat, drink, exercise, or gamble indoors you’re free to do so.

As for safety-first compliance, the responsibility falls on each of us as individuals. In restaurants, already beleaguered servers will have to trust that diners will obey the new state guidance about wearing masks between sips of drinks and bites of food without causing a fuss about it. Restaurant managers will need to trust that guests aren’t flouting the guidance forbidding diners from sitting with people outside their household when they make reservations. Gym staff will need to trust members to keep their masks on while they pump iron, even if they can’t keep an eye on every gym rat during every sweaty rep.

When it comes to crossing state lines, local governments have done little to keep out-of-state travelers from doing as they please. As ski season dawns, for example, resorts will simply have to trust that everyone queueing up to hit the slopes has carefully adhered to guidance asking them to quarantine for 14 days, or take an (increasingly hard to get) COVID test. Our winter vacationing neighbors, too, will be left to police themselves as they return home—after all, the only state in the union cleared for travel without triggering COVID protocols is Hawaii.

In our homes, where no one is watching what we do, the honor system will be the only law of the land. Experts believe informal gatherings are responsible for the overwhelming majority of infections, and have urged us not to invite groups of friends inside, but there is little the state can do to stop those gatherings besides urging us in the strongest terms not to host them. Christmas, like Thanksgiving, will test our collective willingness to listen.

There is some hope on the horizon. A vaccine is coming—in fact, the first doses should be administered before the new year. Of course, that does mean we’ll have a new honor system to contend with: Will most people do the right thing and get vaccinated? Fortunately, surveys show most say they will.

While we wait, though, unless there is a strict and comprehensive effort to keep everyone home—combined, crucially, with the funds to keep everyone and every business from going broke in the process—we are ultimately on our own. We are left to shoulder the individual responsibility of acting safely, and to shoulder the blame if, and when, that goes wrong.

So as we brace for what’s to come in the months ahead, here’s hoping the honor system is enough. And even if we can’t trust all of our neighbors to follow it, the least we can do is follow it ourselves.