What I Miss Most: Standing in a Giant Crowd of Strangers

As the pandemic winds endlessly on, communal experiences seem further and further away. 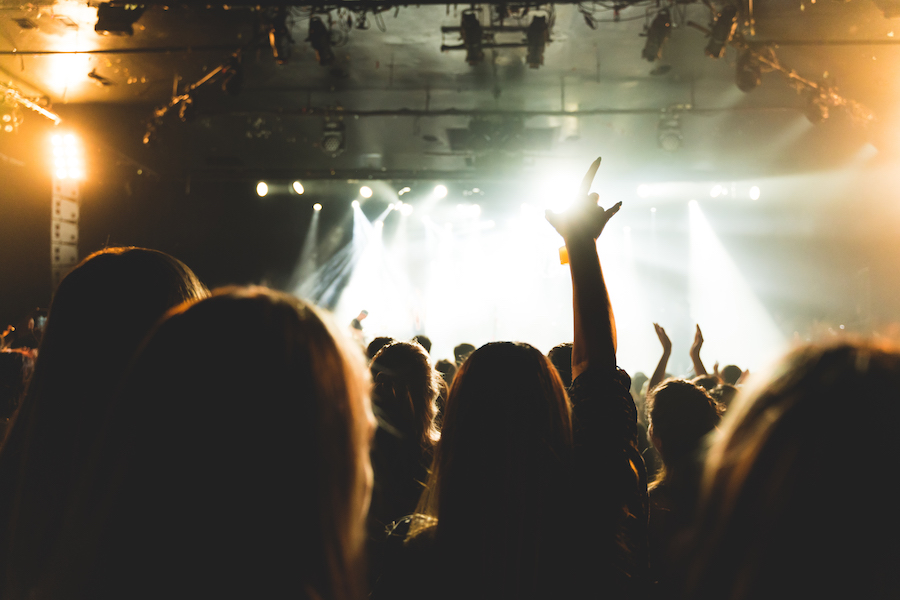 Somewhere out there on YouTube, there’s a video of one of the happiest moments of my life. You can’t see me in it, though.

That’s because it’s a blurry cell phone video of a Rilo Kiley concert at the old Avalon in September of 2007. I had moved to Somerville only a few weeks earlier, and at the time (okay, and kind of still) Rilo Kiley was my absolute favorite band in the world. A big group of my friends and I went to this show together, and the video is the moment when most of the band cleared off the stage except for the two lead singers, Jenny Lewis and Blake Sennett, so Sennett could blast through their song, “With Arms Outstretched,” on an acoustic guitar while Lewis sang. The entire crowd sang virtually every word with her at a volume best described as “shout-sing.” Despite the fact that this was probably recorded on a Motorola Razr, the one thing that you can practically feel seeping through the fuzzy video is the sheer joy of the crowd to be shoulder to shoulder in that packed room, singing one of their favorite songs with Jenny and Blake. I can still remember how thrilled I was to be there with my friends and my favorite band and every other Rilo Kiley fan in Boston. It feels like the headiest, most joyful possible moment of my early 20s that could be captured on camera.

It’s a moment I’ve thought of fondly over the years (and bless YouTube for being a repository for this kind of thing). But whereas watching it used to remind me of a very specific era in my life, it’s taken on a new resonance during the age of COVID, since “being in a crowd with your mouths open and yelling together” is pretty high on the list of things we’re not supposed to be doing right now. And of all the things I have missed and craved during these long months of quarantine, communal public experiences rank very, very high on the list.

Don’t get me wrong: I miss the family members I can’t see. I miss the friends who live out of state, and I even miss the friends who live in state, and who I have exclusively seen outside since March. I miss feeling that the world I live in was remotely recognizable. And I miss being able to get through a day without reading a heartrending tragedy about the colossal failure of this country to reckon with the virus. But in the moments when I can mentally move past the day to day awfulness, what I find myself fantasizing about is crowd experiences. When people ask “what do you want to do most after *this* is all over,” what I see is variations on myself, in a crowd.

It’s not just concerts, either, although those are probably near the top of the list. Give me a packed stadium of baseball fans, all suddenly lurching to their feet, beer flying, trying to use the collective power of their own yearning to send a sailing ball over the fence. Plop me down in the midst of a packed Somerville Theater on opening night of some cheesy new superhero movie, when all of us experience that simultaneous return to childhood when the hero finally dons their iconic apparel and takes a swing at the bad guy. What I want is to experience emotional catharsis with other people—that magic moment when every person in a crowd is suddenly struck by the same feeling, and you’re lifted into nonverbal communion with total strangers. I miss my friends who I’ve never met.

That sense of community is part of what makes living in a big (well, ish) city like Boston so grand, and it is part of what the pandemic has taken away from us. Whereas before you could suddenly find yourself in a crowd of temporary soulmates, we’re now experiencing everything separately, and the constant fear of contagion makes us distrust every face outside our homes. We used to all be engaged in the same big group project of living in Boston, and the city is lonely in a way it wasn’t before.

It’s the end of that 13-year-old Rilo Kiley video that really stays with me. As the song reaches its grand finale, Lewis stops singing altogether. She echoes the song title and stretches her arms out to the crowd, microphone pointed at them, and a chorus of voices rises together to sing back to her. Whoever filmed the video does a wild pan of the crowd, which blurs into a sea of singing faces and outstretched arms. The song ends with one final cheer. In a tone of mock-amazement, Lewis says, “Wow, you guys are HAPPY.” We were. And I have to believe, one day we will be again.