Boston Is Dreaming of a Windy Christmas to Close out 2020

Charge those phones and batten the hatches as an extremely gusty storm moves in. 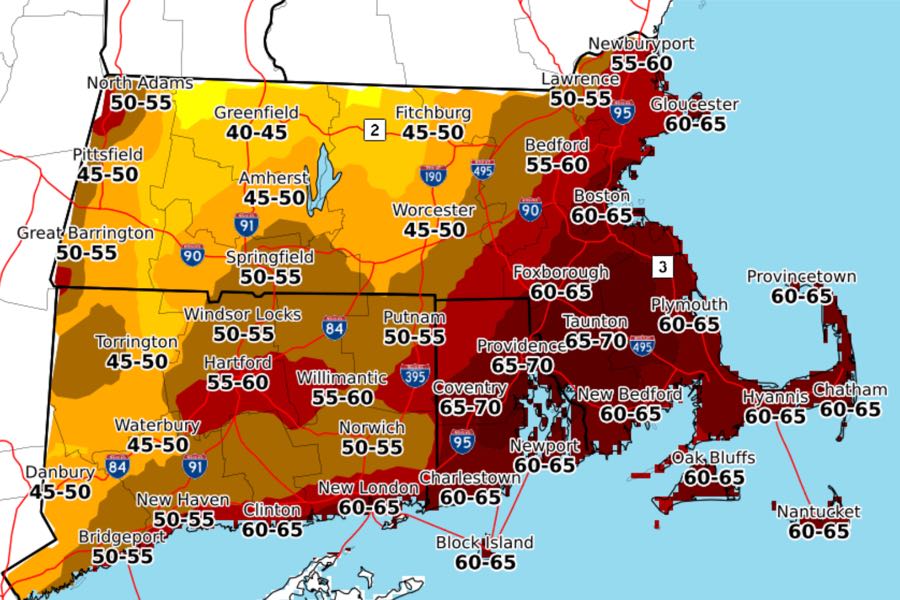 Screenshot of the max wind gusts forecast from NWS Boston

It was already about to be a deeply unusual Christmas in Boston, and now this.

Forecasters are sounding the alarm about extraordinarily high winds and a whole lot of rain as a storm heads to the Boston area just in time for the holiday, with gusts that may reach an eye-popping, evergreen-toppling 60-65 miles per hour. Winds are expected to arrive Thursday afternoon, and slowly pick up late at night and into Friday morning, forecasters say.

“The peak of the event is going to be overnight and into early tomorrow morning. Around when people are waking up, we’re still going to be seeing some pretty strong wind gusts and heavy rain before things start to calm down a little bit in the afternoon,” says Rob Megnia, meteorologist with the National Weather Service Boston. “In the morning hours, things are going to be pretty hectic.”

The reason for this, Megnia says, is the jet stream is expected to pass through the Northeast at a particularly low level and pretty far in from the coast. The result, he says, will be some of the strongest winds the area has experienced “in recent memory.”

“We’ve never seen a low level jet or the forecast for wind this strong during this time of year over the Northeast,” he says. “This is going to be a pretty, pretty strong event.”

The NWS has issued a high-wind warning throughout southern New England, and from the looks of it Boston is slated to see some of the worst of the storm, as the predictions about max wind gusts are up in the mid-60s up in coastal areas, including the city, while they’re a little lower—around 40-50 miles per hour—further west. The warning is in effect in the Boston area from midnight to 4 p.m. Friday.

While wind is the big star of this storm, NWS meteorologists are also warning that heavy rains of 2-3 inches combined with the melting snow from the recent snowstorm could bring severe flooding to some areas, among them urban streets with poor drainage. NWS has issued a flood watch, as well as a reminder to drivers not to drive through flooded areas. Its mantra: “Turn Around, Don’t Drown.”

We are likely to break some precip records on X-mas, as 1-3″ is expected across SE NE. A few other records that are in jeopardy include the record max low and the record high. If we hit 60 at any of our climate sites, we will have one of the top 5 warmest X-mas days on record. pic.twitter.com/UFk5791B64

Utility providers are anticipating widespread power outages and are advising customers to be aware of downed power lines and to keep devices charged ahead of the storm.

We’re ready for today’s weather and you should be too. Make sure to charge your cell phone and have power pack chargers ready so you can contact us if you lose power. You can also download our mobile app or text “OUT” to 23129 for updates. pic.twitter.com/bnJdH10CTo

So, best wishes to Santa this evening. Gov. Charlie Baker has already assured us all that St. Nick has cleared the state’s COVID protocols. Here’s hoping his sleigh’s aerodynamics are up to snuff.