Get to Know Kim Janey, the Next Mayor of Boston

Set to take the role on an interim basis, she will be the first woman and first person of color to lead the city. 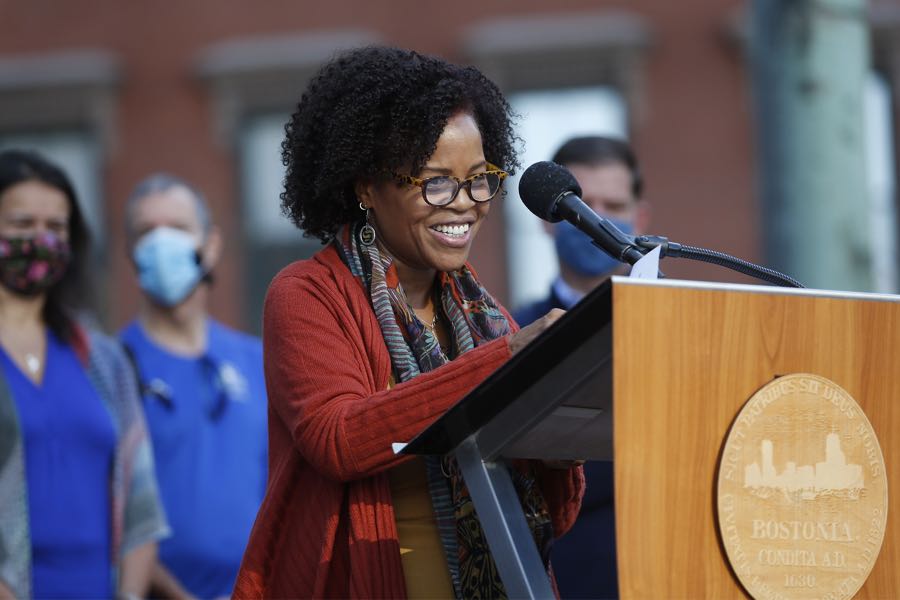 Boston City Council President Kim Janey speaks during a press conference to discuss the outcome of the Presidential election in Boston on Nov. 8, 2020 (Photo by Jessica Rinaldi/The Boston Globe via Getty Images)

Kim Janey, Boston’s City Council president, is set to assume the corner office at City Hall on an interim basis, filling the role that stands to be vacated soon by Marty Walsh, who President-elect Joe Biden has picked to serve as his Secretary of Labor. She would make history in doing so as the first woman and first person of color to serve as mayor of Boston, and would hold the office until a new mayor is inaugurated, either in November, when the city’s mayoral election is scheduled, or in a special election held before that date.

News that Walsh had been nominated for the cabinet position was first published by Politico Thursday afternoon, then Thursday night the mayor acknowledged his nomination. He will still need to be confirmed by the Senate after Biden takes office this year.

Working people, labor unions, and those fighting every day for their shot at the middle class are the backbone of our economy and of this country. As Secretary of Labor, I’ll work just as hard for you as you do for your families and livelihoods. You have my word.

In a statement, Janey congratulated Walsh and said that if he is cleared through the Senate confirmation process she is “ready to take the reins and lead our city through these difficult times.”

Boston-native Janey has served on the City Council representing Roxbury since 2017, and was elected City Council president in 2019. During her tenure, she has championed causes related to education and social justice. While in office she hatched a deal with the Walsh Administration on an overhaul of how the city awards licenses to businesses in the city’s burgeoning marijuana industry, with an aim toward benefiting communities of color, by creating a Boston Cannabis Board. She has also called for a return to the days when Boston’s school committee was elected, rather than appointed, a proposal that recent polling suggests has support from a majority of Bostonians. She also lent her support to christening Nubian Square, the section of Roxbury once known as Dudley Square. Janey was also one of five city councilors who voted against Mayor Marty Walsh’s budget this year, joining her colleagues in calling for deeper cuts to the city’s police budget amid a wave of protests following the police killing of George Floyd. The budget ultimately passed 8-5.

Before joining the council, she was the project director of the nonprofit Massachusetts Advocates for Children. She has a bachelor’s degree from Smith College.

Janey will take the reins at a difficult juncture for Boston, which this week saw the worst COVID numbers of the pandemic, and will oversee both the multi-phased rollout of vaccine and the decisions about when to rollback restrictions on businesses and schools.

In a statement to Politico Massachusetts, Janey’s office said it was awaiting more instruction from officials about the transition. “This is something that we knew there was a possibility of,” her spokesman Dev Chatterjee told Politico‘s Stephanie Murray. “Obviously it wasn’t official until just recently. We’re still waiting to hear from that office and make sure we know how to move forward.”

Boston City Council President Kim Janey spox Dev Chatterjee reacts to Walsh news: “This is something that we knew there was a possibility of. Obviously it wasn’t official until just recently. We’re still waiting to hear from that office and make sure we know how to move forward.”

Walsh’s departure is expected to be met with a flood of candidates vying to replace him. Two city councilors, Michelle Wu and Andrea Campbell, both announced their candidacies in 2020. Councilor Annissa Essaibi George is rumored to be considering throwing her hat in the ring. Whether Janey plans to join them is not yet known, but if she were to run, she would benefit from incumbency in a city that historically has been reluctant to vote sitting mayors out of office. Menino ascended to the mayorship after former Mayor Ray Flynn left Boston to join the Clinton administration in 1993, then went on to serve five terms.

The slate of candidates, prospective or otherwise, means it is likely that whoever is mayor in 2022 will be a woman of color, a remarkable state of affairs in a city that has only ever been led by white men.