Deleted tweets suggest a BPD officer may have taken part. 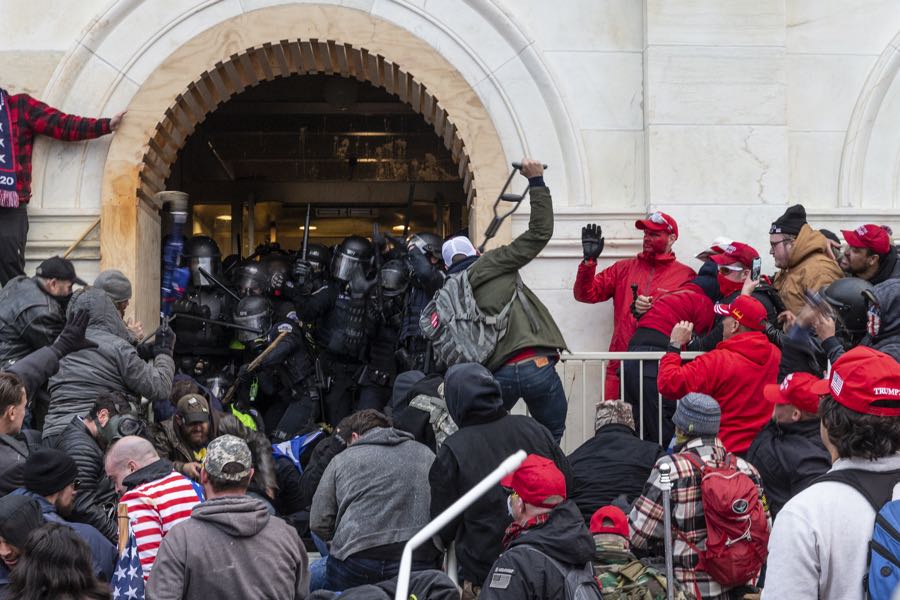 Rioters clash with police trying to enter Capitol building through the front doors on January 6 in Washington, D.C. Photo by Lev Radin/Pacific Press/LightRocket via Getty Images

As police departments across the country are coming under pressure to determine exactly how many of their police officers joined rioters in the violence at the Capitol last week, Boston Police say they have begun investigating whether a BPD member was among the insurrectionist horde.

The BPD has told the Boston Globe it will look into the matter after the outlet pointed to screenshots circulating online that appeared to show that a Boston cop had been tweeting about his intention to travel to the Capitol for the protest. The tweets, from a user with the handle @mailboxjoe, have since been deleted, but the account’s archived bio includes claims that the user was a “marine vet” from Boston, and its chosen avatar was an image of a character from the movie Team America World Police. Archived tweets from the account include posts about his belief that the election was a “coup,” that he would “definitely be there” in Washington on January 6 and that he would “keep fighting” to help Trump overturn the election results.

Neither the Globe nor the police have identified the officer in question, although both appear to know who he is. WBZ reports that police are “looking into the possibility that he was there with other officers.”

As of yet, there does not appear to be any publicly released evidence that the officer was among those who actually breached the Capitol in a raid that left five people—including a Capitol police officer—dead, or whether he ended up making the trek to D.C. at all.

All that online sleuths have been able to uncover are incendiary tweets. “Today is a day for choosing,” he allegedly tweeted. “Today there will only two parties in America. Traitors and Patriots!” He also allegedly posted threatening comments about Vice President Mike Pence, who the president and his allies had criticized for not disrupting the certification of votes for president-elect Joe Biden. “I hope you never sleep well again @VP your Treasonous Act lead to the murder of an innocent girl and the death of America. You are not a Godley man,” he wrote. “I guess @LLinWood was right about you all along.” The mention of attorney Lin Wood is suspected to be in reference to Wood’s commentary that Pence ought to be executed by “firing squads.”

Two Massachusetts residents have been charged in connection with the chaotic protests in Washington. David L. Ross, of Pittsfield, was charged with unlawful entry and violating a curfew. Anne Lorenz, of Milford, was charged with assaulting a police officer earlier that day. Boston FBI agents have also arrested a 61-year-old New Hampshire man, who is accused of breaking into the Captiol. U.S. Attorney Andrew Lelling has pledged to bring to justice anyone who traveled from Massachusetts to Washington planning to commit violent crimes.

Other local public officials have faced scrutiny for their actions in D.C. A New Hampshire police chief has come under fire for attending the rally, although he denies being involved in the raid of the Capitol. And Somerville opened an investigation amid reports that a city employee had joined protesters in D.C. The employee, identified as Jess Turner, a board member of the city’s Affordable Housing Trust, has said she joined the Trump rally and protest and tweeted that “we have breached the steps” of the Capitol but did not actually enter the building, citing photo evidence that placed her at a considerable distance away from the action. Meanwhile, photos do appear to place Natick Town Meeting member Suzanne Ianni amidst the crowd of rioters inside the breached Capitol. Town Meeting has faced calls to expel her from that body, but have said they lack the authority to do so.

The investigation in Boston comes as members of law enforcement from around the country have been outed for allegedly storming the Capitol, among them two off-duty police officers from Virginia and one from Houston, or for posting violent messages about public officials, including posts from a Philadelphia detective. LAPD officers who attended the rally have been asked to speak with the FBI. A running tally at The Appeal, which has been tracking members of law enforcement believed to have attended or supported the rally—including some believed to have breached the Capitol—lists 33 members of law enforcement from 16 states as of this morning. Two Capitol Police officers have been placed on leave in the wake of the violence, one for taking selfies with rioters inside the Capitol, and one for allegedly donning a MAGA hat and directing rioters through the building.