It Ain’t Easy Being Green during a Pandemic

Like so many Bostonians, I used to carry my reusable bags to the grocery store, recycle religiously, and pick up other people’s trash off the ground. Then COVID came along. 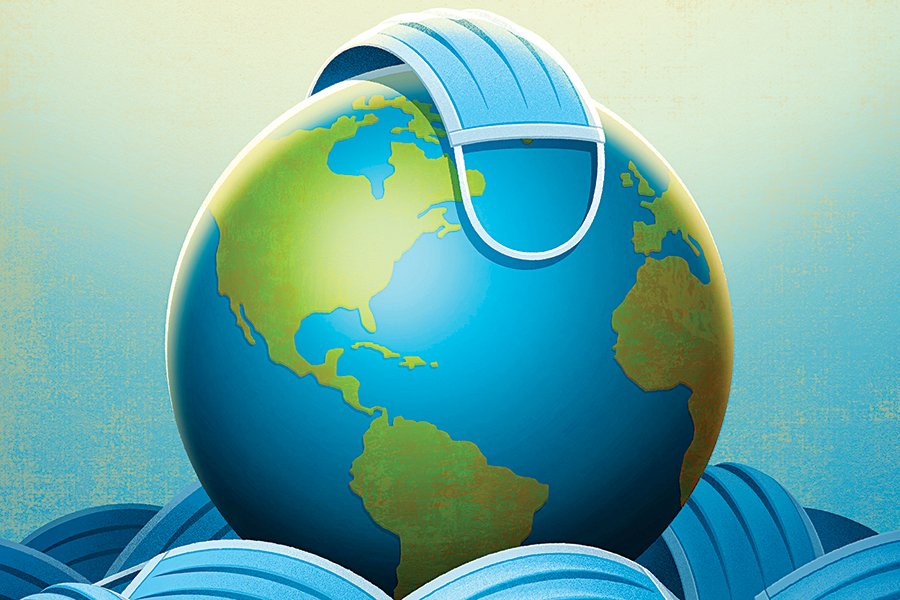 Ecologically speaking, my personal pandemic nadir came when I finally tried to deal with the accumulation of plastic bags in my kitchen closet, which had reached the point where they were beginning to exert their own gravitational force. Assuming I could return them at Whole Foods’ recycling station, as I had for years, I stuffed them into my trunk the next time I needed groceries. Then I waited patiently for a parking spot, a blood sport on the best of days, and stood in line to enter the store. When I was finally ushered in by the masked Cerberus with the counting clicker, I headed straight for the recycling bin—only to find that it wasn’t there anymore, another casualty of the COVID era.

I wasn’t about to take the bags back out to my car and repeat the whole process, so I opted to stash them in a corner, intending to retrieve them on my way out. Except, of course, that they weren’t there after I’d paid at the register, likely tossed into the dumpster by an overachieving employee. I now have visions of a sea turtle slowly being drowned by my plastic bag from the sushi place around the corner.

Pre-COVID, I thought of myself as relatively enlightened when it came to ecological issues, and I did my level best to ease the burden on Mother Earth. I recycled fastidiously, despite the fact that experts like to point out recycling is only the last “r” in “reduce, reuse, and recycle,” and some of what we try to recycle still ends up in landfills. As a travel writer, my carbon footprint was undeniably execrable before quarantine, but I tried to offset it by driving a hybrid electric car. When I indulged in my favorite pastime, beachcombing, I always made a point of doing one pass to look for treasures and another to collect trash. And for the past eight years, I’ve served on the board of the Trustees of Reservations, the nation’s first conservation and preservation nonprofit, whose mission is to preserve and protect places of natural beauty for the use and enjoyment of the public. In short, I’ve always considered myself a right little tree-hugger.

Then the pandemic blew all that out of the water. My consumption of single-use plastics has skyrocketed. I’ve stopped using my own bags at the grocery store. I’ve purchased almost everything else I’ve needed online, conjuring a veritable Everest of cardboard and bubble wrap to my front door. My water usage from washing my hands obsessively has increased a thousand-fold. And forget about picking up other people’s waste, on the beach or anywhere else. Though I’ve made it a point to get outside and go for long hikes on Trustees properties over the past 10 months, not once have I stooped to pick up a discarded juice box (something I would have done reflexively in the past). In fact, I hesitate to touch any detritus I didn’t actually produce, even if it’s lying in my own driveway.

I know I’m not the only one who has become a lot less green since the first wave of stay-at-home orders began last spring. “Trash, as a whole, has increased,” says Brian Coughlin, superintendent of waste reduction for Boston’s Department of Public Works. “With more people working and learning remotely, trash that would normally be disposed of at work, school, or community centers is now making its way to the curb.” The result? Compared to 2019, there was a 6.6 percent increase in residential waste through October in the city—a whopping 18 million more pounds of garbage than usual.

Except that from my personal observation, a lot of it isn’t even making it into the appropriate receptacles. The amount of rubbish discarded wantonly, all over the place—from takeout containers to empty bottles of spring water—seems to have proliferated along with the virus. “We’re not typically used to seeing PPE as litter, so just like everything else in 2020, the coronavirus pandemic has changed even the way our trash looks,” Coughlin explains.

I’m certainly not blameless in this regard, either. Masks, disinfectant wipes, and other necessities of the COVID toolkit have undoubtedly fallen out of my pockets while I’ve been fumbling for my reading glasses or trying to pay a parking meter without touching it, and I’m ashamed to admit that at times during the past 10 months, when I’ve missed a public garbage can, I haven’t felt comfortable rectifying the situation.

So has COVID-19 turned otherwise well-intentioned Bostonians like me into eco-terrorists? Would I cause that single, iconic tear to roll down the cheek of the Native American chief in that 1970s anti-littering ad campaign? Would Swedish environmental activist Greta Thunberg point an accusing finger at me and call me the Antichrist? The pandemic has forced some of us to take a personal inventory of our behavior and face an unfamiliar ecological reckoning.

Not surprisingly, when I did an informal poll of my friends and acquaintances, many people had similar confessions. There’s the Al Gore–idolizing intellectual who admits she’s turned into an “eco-criminal” when it comes to single-use plastics and delivery services for books, coffee beans, and specialty foods. She also points to her excessive baking habit as a source of guilt. While it helps maintain her sanity, “unfortunately, a lot of what I make goes to waste,” she tells me sheepishly. It’s safe to say that not more than a mile away from where strudel and babka are going stale on her counter, there are people who are starving or food-insecure, and while she’d normally try to give any excess to the hungry, the truth is that even the homeless are reticent about accepting food from a stranger during a pandemic.

Another friend says she’s both astonished and ashamed by how much larger her eco-footprint has gotten since the pandemic started. “My Amex bill used to be restaurants, Ubers, and groceries,” she notes. “Now, it’s all Amazon Fresh, Uber Eats, and Gary Drug, who I call and ask to put things in a taxi to deliver them.” This, from a mom who generally thinks three moves ahead and is such a perfectionist that she insists on doing everything for herself, or supervising those who do.

Perhaps the only people who might reasonably be expected to consider the consequences of their actions on the planet’s future in these circumstances are first-time parents, who tend to be idealistic and overly self-conscious. However, a young couple who had their first baby in September say the stress of rookie parenting coupled with the pandemic has made them even less conscientious. “I was thinking just this morning about how inefficient Amazon is, when I took one small sweater out of a huge box,” says the new mother. “But I try to limit trips to CVS until the baby’s had all her shots, so more often than not, I’m ordering things online. I took a photo of our driveway the other night, with boxes stacked high.”

So what’s driving normally green Bostonians to commit a litany of eco-sins? Cambridge-based psychotherapist Mark Davila attributes the shift in behavior to the “hierarchy of needs” first articulated by Abraham Maslow in the 1940s. Essentially, the bottom of this pyramid is made up of basic necessities such as food, shelter, and safety—none of which feels guaranteed right now. “We’ve all regressed to earlier developmental concerns,” explains Davila, who says he regularly sees masks blowing around the parking lot of his local Costco. “Things like the impact on the environment feel more distant than usual. It isn’t selfishness in the usual sense, but it’s an inability to ‘mentalize’ ideas and thoughts outside of one’s basic needs.”

Thankfully, sometimes meeting those basic needs can actually work in favor of Mother Earth. By eating mostly at home, doing some thoughtful meal planning, and making less-frequent trips to the grocery store, my husband and I have dramatically reduced the amount of food waste coming from our kitchen. Leftovers no longer rot in the fridge and produce doesn’t spoil, since we’ve been eating in almost exclusively. I’ve been saving vegetable and other food scraps to make stock, and, like many others during this time, have tried nifty experiments such as regenerating celery and green onions on the windowsill. Although we’ve yet to pull the trigger on actually joining one, a composting service is in our future, and the amount that gets tossed carelessly down the garbage disposal has been significantly reduced.

This may sound trifling, but as food activist Mike Calabrese (drummer for the band Lake Street Dive) pointed out in his remarks during this year’s virtual fundraiser for the food-reclamation charity Lovin’ Spoonfuls, producing and shipping food requires huge amounts of energy: “When that food is wasted, not only were those emissions in vain, but when it’s taken to a landfill and rots, it produces greenhouse gases.” According to his statistics, 40 percent of the food in the United States goes to waste every year, and that, in turn, contributes something like 8 percent of our greenhouse gas emissions—not exactly small potatoes (pun most definitely intended).

As for the other 92 percent, the COVID clampdown has had a similarly positive effect. The National Institutes of Health says that movement restrictions and slowdowns in social and economic activity have improved air quality and reduced water pollution in many cities around the world. In fact, Bloomberg reported that the United States was on track to reduce greenhouse gas emissions 9 percent in 2020 compared to 2019, technically making this the biggest drop on record.

There’s also something to be said for the benefits of having more time to spend in nature. “Most people, especially city dwellers and suburbanites, have long been disconnected from the environment,” says Tedd Saunders, CEO of the natural-resources consulting firm EcoLogical Solutions and a sustainability expert. He posits that the extra time spent outdoors this past year—walking, hiking, and gardening—has attuned more people to nature, hopefully inspiring them to take a more active role in protecting the environment and giving us “a huge chance to turn the corner on climate disruption.” The Trustees alone has seen a 30 percent increase in membership applications and markedly more traffic at some of its less-frequented properties. Its agricultural sales also grew by four times the usual amount from March through May, likely the result of locals opting to shop at small farm stands rather than crowded supermarkets.

The pandemic, in other words, has proven that we can and do change the way we act—e.g., getting outside more often, wearing masks in public, maintaining social distancing, and frequently washing our hands (which more than one wit has pointed out ought to be something we do regardless of whether a deadly pathogen is tearing through our communities). With time, then, hopefully those of us who have lapsed in our ecological rigor will eventually be able to mend our littering, Amazon-one-clicking ways. But what COVID-19 has thrown into stark relief is just how far all of us—even those who studiously follow recycling guidelines—have to go. When it comes to having a meaningful environmental responsibility, it’s high time we all wake up and smell the coffee grounds…then use them to fertilize those gardens everyone worked so hard on cultivating during lockdown.