At Least for Now, Fenway Is the People’s Park

With the bleachers sitting idle, it became a COVID fundraiser hub, an early voting location, and now, a mass vaccination site. 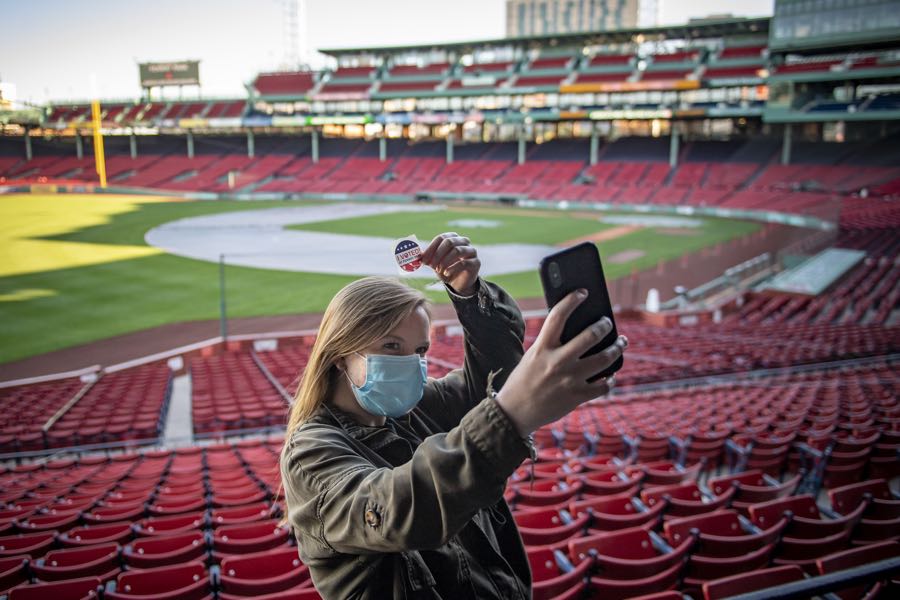 A voter poses for a selfie photograph after voting at Fenway Park. (Photo by Billie Weiss/Boston Red Sox/Getty Images)

Not having Fenway Park this year really sucked. For the first time in maybe a decade, a year went by without the chance to spend even one perfect summer night in the stands, scarfing down the famous hot dogs and singing the famous song at the seventh-inning stretch. I miss it, a lot.

So when Fenway stepped up to the plate (excruciating pun intended) to do its civic duty in a bullshit year, it was enough to warm my COVID-chilled heart. Early on, there were little moments of joy inside the beloved landmark, like when the team brought Beth Israel staff to the empty park to throw out a ceremonial first pitch, and welcomed a convoy of EMTs to the outfield. Then came the now famous live-streamed Dropkick Murphys concert and, when the push was on to avoid crowding at polling places on Election Day, Fenway opened its gates to voters, who lined up in the shadow of the Green Monster to cast their ballots in Fenway’s dormant concourse.

Now, eligible Bostonians will once again be queueing up at Fenway as it morphs into one of the state’s mass vaccination sites. A soft-open starts Thursday, and the plan is to eventually give out as many as 5,000 shots a day this spring and possibly into the summer (The Sox tell me the plan is to keep it running even after the baseball season gets underway).

In a miserable, soul-crushing year that saw, among many, many other things, a fan-less baseball season, Fenway Park has been there for us all along.

It makes a lot of sense for Fenway to do this. For one, it’s a big, empty, centrally located space with ample ventilation, and not much else going on at the moment. As a 37,000-capacity venue, it’s already very good at handling crowds, and I’m told Fenway ushers will be on hand to safely guide patients around the building. 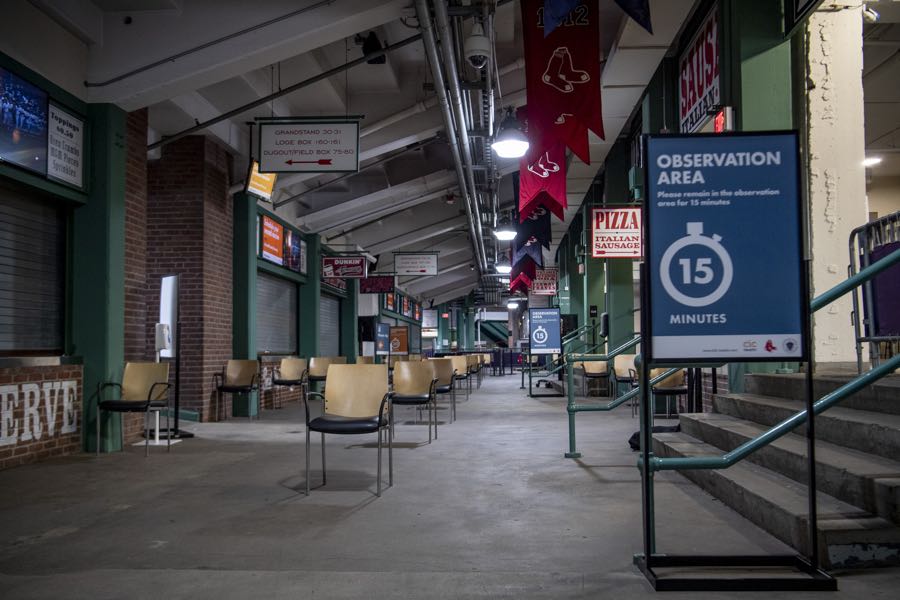 But on top of that, Red Sox leadership recognize that putting a vaccine distribution center in such a cherished location might just inspire more people to take the vaccine, at a time when a staggering number of Bostonians are telling pollsters they’re ambivalent or worse about doing so. Park staff will set up three “viewing stations” where people can catch a glimpse of the field, and you can already imagine the flood of post-vaccine Fenway selfies on social media once the operation really gets rolling.

“Our hope is that people who are here getting vaccinated are taking advantage of their communication network and encouraging people to get vaccinated,” Jonathan Gilula, Red Sox executive vice president and chief operating officer, tells me. “We think Fenway Park will not only be attractive to people coming here, but hopefully allow us an opportunity to spread the word.”

Like every franchise worth its salt, the Sox have raised millions for charity over the years, but this latest move is part of a long history of putting its nine acres of prime real estate to use to meet the moment. Exhibition games helped fund the war effort in the 1940s, and it’s hosted pivotal rallies for Presidents (famously including FDR) and religious and political dignitaries from overseas, as well as memorials for JFK and troops killed in the Spanish-American War. More recently, it’s hosted thousands of new U.S. citizens at naturalization ceremonies, and annual mass blood drives on September 11.

“We’ve got a ballpark that is now in its 109th year, and it’s been a Boston institution all that time. It’s great that the park has been able to be used in the past, and now there’s another use for it,” says author and historian Bill Nowlin, who’s written dozens of books about the Sox. “To be able to put it to such a public good at a time when we’re obviously in a crisis is just a nice marriage of a lot of things. It’s good from the team standpoint, it’s good from a publicity standpoint, it’s good for public health.”

Naturally, Nowlin isn’t passing up this opportunity: He’s got an appointment booked for next week.

This latest pivot from baseball stadium to public resource is a welcome one, because Fenway Park’s doors have not exactly been wide open in recent years, as its beloved status has put a premium on actually enjoying it. The average cost of tickets and concessions at Sox games is now north of $350, the second priciest MLB experience in the league.

The neighborhood around the stadium has changed, too. Upscale restaurants and condos have spread in its wake, property values have soared, and much of the Old Boston grime of the neighborhood has been carefully scrubbed away. More is coming: A flashy new 5,000-seat concert venue is set to rise out of a parking lot attached to the park later this year, a move that could make the area more attractive, and expensive, still.

It hasn’t always been an attraction beloved by the whole city, either. By the Boston Globe’s estimate, fewer than 2 percent of fans on a given night are Black. So there was some understandable frustration when Fenway was announced as perhaps the crown jewel of the city’s vaccine rollout. “Why should we have to come to Fenway?” Dinanyili Paulino, of the Chelsea group La Colaborativa, asked in a recent interview with the Boston Globe. “We are the epicenter. They should come to us.” For that reason, Fenway should definitely not be the only place in Boston to get a vaccine, and it won’t be. Scores more vaccine sites are allegedly on the way, and the state has been under a lot of pressure to keep equity in mind when opening them.

Whatever happens, it’s possible Fenway will never again in our lifetimes be used exclusively for the public good at this scale. So I’m cheering it on. Hopefully I’ll be there soon. 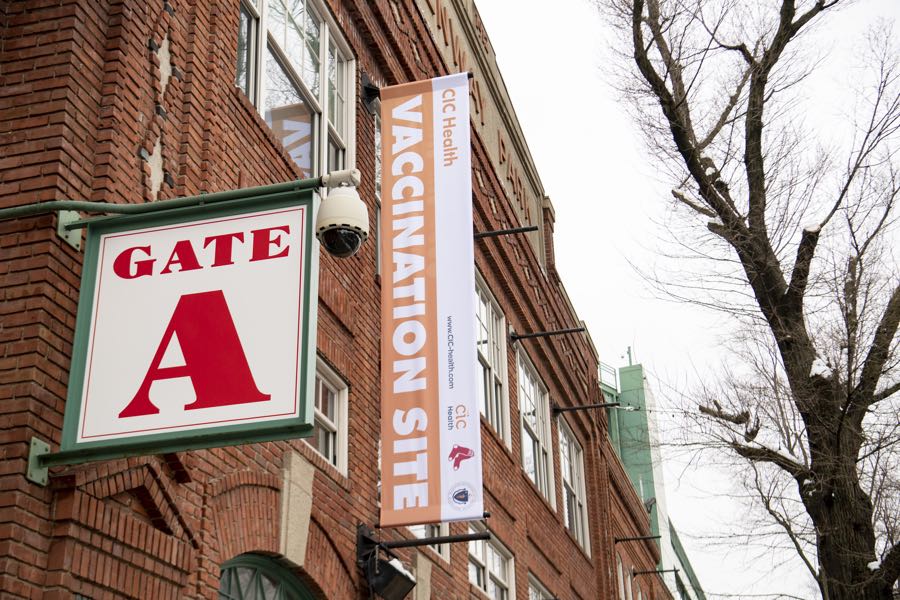