A look back at this infamous moment in taxpayer rage bait history. 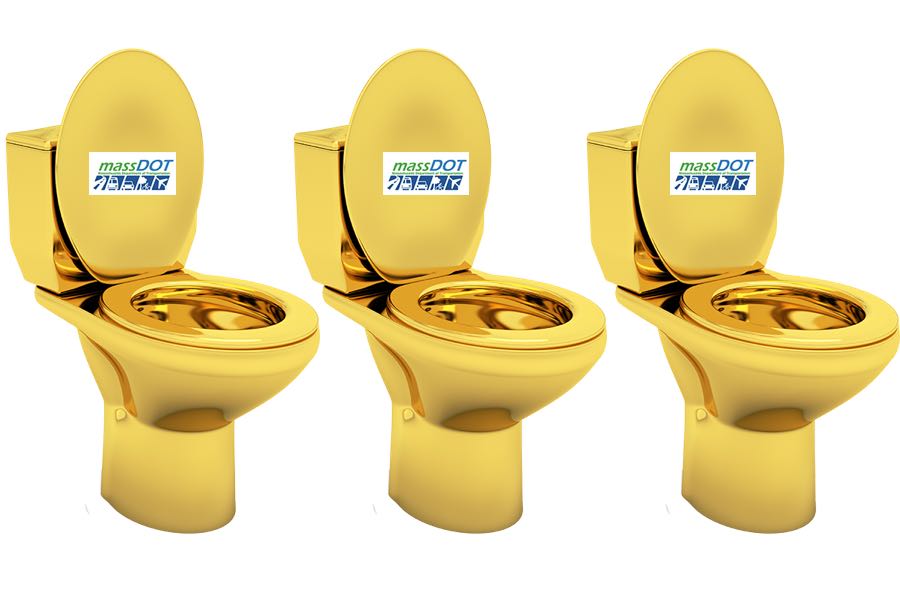 In this time of transition for MassDOT, as officials weigh budgets in the region’s post-COVID future, and Secretary Stephanie Pollack departs the state and settles into her new post in the Biden administration, it’s worthwhile to take stock of all that has come before us, the lessons we’ve learned together along the way, and how history might inform the complex and critical work of transportation policy moving forward. So we thought it more than appropriate to take a stroll down memory lane to one of the most talked about controversies to hit Pollack’s agency: the $100,000 toilet.

Yes, for a moment back in 2018, the line item on the tip of everyone’s tongue was not an extension of the Green Line into Somerville, but an extravagantly expensive bathroom in the heart of the State Transportation Building.

For those unfamiliar with the history of this lavish loo, this pricey privy, this costly commode, grab some Febreze and settle in as we plumb its depths.

Was this a case of runaway spending and a dearth of public accountability, an overreaction to a taxpayer-bait tabloid sleaze? Yes! And yes! It’s also your classic cautionary tale for anyone with access to a state or federal government’s purse strings: If you’re gonna spend a lot of the public’s money, never do it in a way as funny as this.

Here’s a timeline of how it went down:

Yes, like all stories involving MassDOT in the years since, the golden toilet saga begins in 2015, when the worst storm in a generation brought the state’s transportation system to a halt, and in the process exposed how the MBTA’s years of financial neglect had left it vulnerable to such a catastrophe. So that summer, Gov. Charlie Baker formed the T’s Fiscal and Management Control Board, a panel of experts tasked with rebuilding the agency and its funding from the ground up.

In the years that followed, the FMCB was under pressure to reform the agency, and had no shortage of tasks to tackle, often trudging through long agendas at meetings that could run on for hours and hours. The board’s regular meetings became news-rich environments, and were regularly swarmed with reporters eager for answers about whatever the news of the day might have been, be it runaway costs or runaway Red Line trains. The reporters were dogged in this effort, so much so that they made a habit of pestering its members, as well as Pollack and the T’s rotating cast of general managers, with questions wherever they could—including (and this would prove important) as the T staffers made their way to the only bathroom accessible to them, a public one several paces across the hall from the second-floor meeting room where MassDOT and FMCB meetings are held.

In February of 2018, a new bombshell dropped, courtesy of WCVB’s 5 Investigates team, which had obtained records revealing all the seedy details: MassDOT had, apparently at a request that came straight from Pollack, bought itself a private bathroom, and an adjoining counter, sink, and mini-fridge without putting the project out to bid. Instead, the agency relied on a favored contractor typically responsible for emergency repairs, leading to an eye-popping price tag of $101,635.81, split between the infamously cash-strapped MassDOT and the MBTA. Quite a lot for such a small space—as the investigators put it, it cost $857 per square foot.

It was a scoop that perfectly fit the medium. Quick cuts of images of the most average-looking bathroom you’ve ever seen, interviews with the tax-averse Pioneer Institute calling it “outrageous,” and the salacious alleged impetus for the project:

A MassDOT spokesperson told 5 Investigates one reason Pollack felt the MassDOT and MBTA board members needed the new private bathroom is because during public meetings, reporters and photographers have been known to follow them when they walk to the public restrooms across the hall.

February 20, 2018: Toilet-gate gets picked up by other media outlets

The juicy story is picked up elsewhere, with an AP wire version catching the attention of such outlets as Money.com, the “Odd News” roundup on Snopes, and local sites as far afield as Lima, Ohio. One red-assed take from the talk-radio station WRKO began like this:

And went on to argue that this was further proof that we all live in “the People’s Republic of Marxachusetts,” proof that when you goof up this bad with the public dime, it gives license to columnists to just say any old thing.

Having earlier refused to go on-record about the incident, Pollack finally responded more than a week later, apologizing for not having been careful enough w/r/t toilet expenses, and for not having been more forthcoming with records of the line item:

“While trying to meet the legitimate needs of our volunteer board members we should have been more careful to minimize the cost of the project. In the future we will be more careful to ensure that necessary work in our building gets done for the lowest possible price.”

‘We should have been more careful’ – MassDOT responds to $100,000 bathroom revelation https://t.co/Gz3vJUdB9h pic.twitter.com/EfI98NsFLS

By March the public’s interest in this particular loo had not waned, at least not enough to spare Charlie Baker a barrage of questions about it during a sit-down with the Springfield Republican. But the governor’s take on the whole ordeal was that one has to look at the whole picture. The MassDOT board and the FMCB had saved hundreds of millions of dollars by helping the agencies clean up their acts, he said, so what was a piddling $100k in the grand scheme of things?

For now, of course, T board members have seen their trips to to the bathroom reduced significantly, as they are free to do so from the comfort of their own homes while tuning in via Zoom. But some day down the line when the post-COVID world permits meetings to be held in person once again, the infamous $100,000 john will be there to greet them, a monument to public spending gone wrong, and a memory we’ll cherish forever.