Five Ways Massachusetts Ditched the Nanny State during the Pandemic

And how to keep the good news coming. 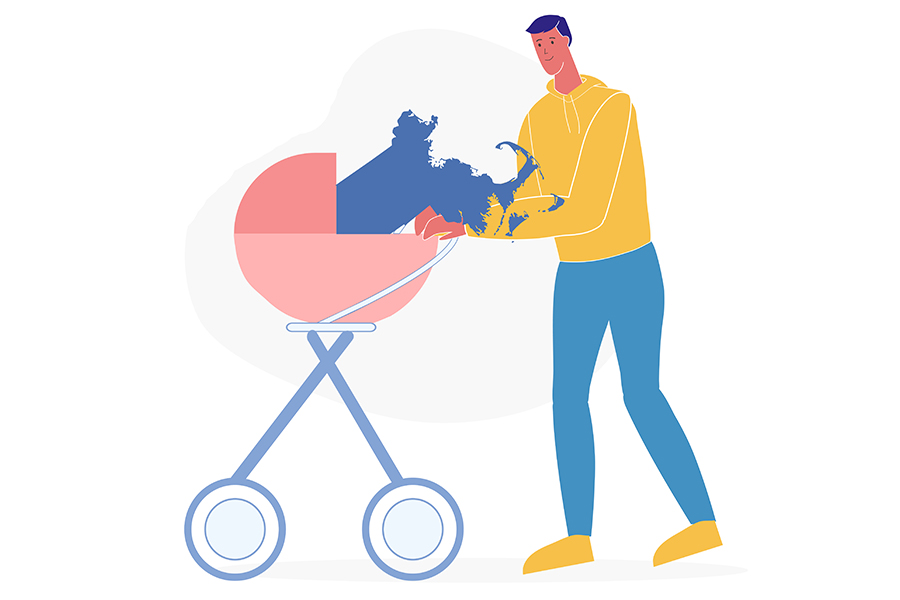 Illustration by Spencer Buell with art via UnitoneVector/Getty Images

On the one hand, city and state government decisions have never played a more jarringly intrusive role in our day-to-day activities, with sweeping curfews, strictly enforced distancing regulations, and constantly rejiggered capacity limits and outright shutdowns to curb the spread of the coronavirus. But on the other, this past year saw a long-overdue reckoning when it comes to our state’s regulations. With any luck, it will help sever a few more of our much-loathed Puritanical roots once and for all. The nanny state, to put it simply, has shrunk.

I’m aware of how that term has been used by the worst among us to whine about being asked to wear a mask at Market Basket, or to oppose good ideas like, say, bans on wretched plastic bags. But naturally I do endorse its usage when it drives a point home about things I myself believe. A nanny state that keeps maskholes from coughing in everyone’s mouth is good, and one that puts capricious curbs on fun is bad. So for that reason, please join me in celebrating the moments Massachusetts snuffed out the nanny state intrusions this past year for the better, and why we ought to kiss them goodbye long after this is all over.

2020 was the year liquor regulators learned that often the best thing they can do is get out of the way. The state heeded calls to allow booze with takeout orders—first beer and wine, and then mixed drinks—and in so doing gave beleaguered restaurateurs one more way to serve customers at a time when revenues plummeted. It also gave the rest of us a means of simulating the experience of enjoying our favorite local spots by sipping hand-crafted old fashioneds from the comfort of our living rooms. It’s not enough to save the industry by any means, but it proved a perfectly good win-win situation for all involved, and there’s no reason why we shouldn’t just fold margs-on-the-go into the city’s restaurant scene for good from here on out. And that was just the beginning:

It’s been a banner year for parks, as cooped-up Bostonians flocked to green spaces citywide in search of safe locales to congregate outdoors. It’s hard to quantify, exactly, but the consensus this past summer appears to have been that if someone opted to take a few beers, a bottle of wine, or their plastic cups of to-go beverages to a public place, the cops had the good sense not to make a big deal out of it. What a great development that was. As critics of pubic consumption laws have been pointing out for years, enforcement tends to fall overwhelmingly on the backs of people of color. Better to scrap them altogether. Enjoying a carefree spiked seltzer in the park, and protecting people from racist police harassment all in one go: a win-win-win-win!

We loosened rules on outdoor dining

Who among us didn’t see the surge in outdoor dining set-ups at restaurants and think we should do this all the time? It didn’t happen by accident. The city essentially threw precedent out the window and made countless slices of on-street parking available to just about any restaurant that wanted it, and tacked an extra month on to patio season. Scores of them did. The city also tacked an extra month on to the al fresco dining season, waived fees and permit requirements for outdoor heating, and removed plenty of headaches for restaurateurs in a year that was essentially one long migraine. Remember, the city hasn’t always had such a lax attitude about patios: Just two years ago, the buzzkill BPD hassled four restaurants for opening their patios on a sunny February day during a Pats victory parade. So we’ve come a long way.

Magic mushrooms are quietly having their moment

Somerville broke new ground in the state this month when it voted to decriminalize psychedelic plants, a long-overdue move that really doesn’t have much to do with the pandemic, except for the fact that any reasonable public official would have to look around at everything happening in public health right now and realize there are far bigger fish to fry than haranguing consenting adults who opt to take mushrooms every now and again. Squandering public resources to lock up occasional psychedelics users looks worse than ever in the harsh light of a global pandemic, and the dominos have begun to fall. Cambridge has now done the same, and some have speculated a statewide law (following in the footsteps of Oregon) could be around the corner. Good, good, and good.

So did early and mail-in voting

Is the nanny state to blame for how we’ve conducted elections in the past? Maybe. But nevertheless, this year we saw how enthusiastically this state’s voters will embrace the opportunity to cast their ballots early or by mail—particularly when beloved landmarks reinvent themselves to fulfill their civic duties—so the closer we get to letting people vote whenever and however they want, the more people are likely to participate at all.

(But we didn’t go far enough)

The party shouldn’t stop here. A more aggressive nanny state purge could still do a lot of good in this state. What if, for example, we just let our old hangups about happy hour and other liquor-related regulations finally expire this year? Say a restaurant suddenly decided $2 beer promotions or Champagne Funnel Tuesdays would keep their business aloft—why not have that on the table? (Provided, of course, that distancing was still enforced and those funnels were properly sanitized).

What if the state’s stranglehold on the number of liquor licenses was lifted, and license holders bailed out, to eliminate the batshit-nuts cost of selling drinks downtown once and for all?

What if patio season never had to end at all, and restaurants could opt to set up outdoor dining in parking spots on a whim on unseasonably warm winter days?

What if, once a critical mass of people are vaccinated and ready to party into the night like it’s 2021, we let bars and clubs stay open deep into the wee hours of the morning the way more nightlife-friendly cities do?

If the nanny state makes its unwelcome return when this is all over, we’d be doing the city a disservice. Let’s make a commitment to be better, and more fun, in the post-COVID era.