What You Need to Know about Boston’s Vaccine Sites

Where things stand in the fraught and complex process behind getting coronavirus vaccine shots in Bostonians' arms. 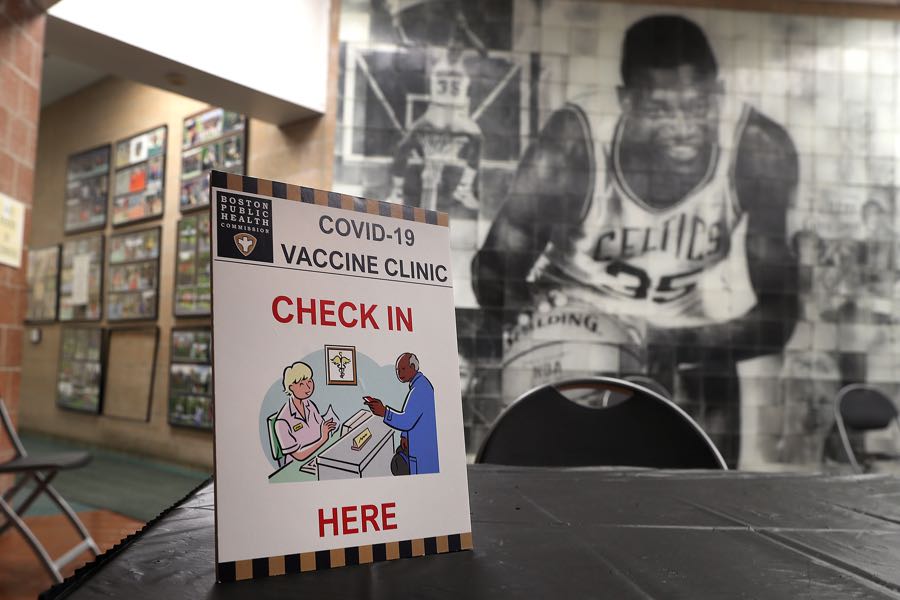 First, please join me in taking a giant step back for a moment. Vaccines are here. All the science available to us right now shows that they are safe, and that they work. However slowly and clumsily they are making their way to our doorsteps, the lifesaving medicine exists and is giving our neighbors lifesaving immunity to a deadly virus. This is good news!

The particulars of how this process is playing out complicates things, though. The formula for where and how Bostonians will get shots—not to mention which Bostonians will get them—is constantly being tweaked. So at a time when anxiety, confusion, and frustration are reaching highs even as case counts are thankfully trending down, now feels like a good time to break down exactly what the city’s vaccine rollout looks like on the ground, and where, when the time comes, you will eventually be able to get yours.

For the time being, the only people eligible for vaccines are people who are either over the age of 75 or who work in frontline jobs prioritized in Phase 1: healthcare workers and first responders. People over 65, those with two or more chronic health conditions, and those who live or work in low-income senior housing, will be eligible beginning on Thursday, February 19. A controversial new state guideline allows companions for people over 75 to also get their shots, regardless of their age or health status, if they show up with an elder. Some controversy has also attended the wait list—a system designed to keep doses from going to waste, but which, in practice, has also been kind of a free-for-all. The good news is that the government is picking up the tab for vaccines. No matter where you get a vaccine, and regardless of whether you have health insurance, it won’t cost you a penny. Immigrant rights groups have also stressed that undocumented residents also qualify for doses and that they won’t face immigration problems for accepting a free vaccine.

Appointments can be scheduled in a number of ways, among them a new “vaccine finder” website  the state launched on February 12, and a COVID-19 call center, which can be reached by calling 211.

So here’s a look at the types of vaccination sites Boston will have, and where they stand right now.

Fenway Park is clearly the centerpiece of the city’s vaccine rollout. That’s intentional. The state’s priority has been to inoculate as many people as possible at so-called mass vaccination sites because Baker and health officials say they will be faster and more efficient than smaller sites, capable of operating like assembly lines where people are queued up, inoculated en masse, monitored for (rare) allergic reactions, then sent on their vaccinated way. When the supply of doses allows it, officials believe Fenway will be capable of vaccinating 5,000 people a day.

The new companion rule was designed with this goal in mind, the thinking being that elderly residents are more likely to make the trip to one of the larger sites if someone goes with them.

Boston’s second mass vaccination site at the Reggie Lewis Center in Roxbury will serve a similar, but slightly different purpose. The space can also handle thousands of patients a day, and is designed to be an attractive option for communities of color, who have suffered at disproportionate levels amid the pandemic. In the early stages, the center appears to have catered mostly to white people from outside the neighborhood, but the city has taken some steps to change that, including setting aside nearly half the doses at the site for use by organizations like the Black Boston COVID-19 Coalition, which works with Black seniors.

Hospitals were first out of the gate in the state’s vaccination effort as the state worked to immunize health workers. Congregate settings, including both nursing homes and prisons, were at the front of the line as well. But the state is aggressively winding down this aspect of its plan in favor of mass vaccination sites. As a result, hospitals have stopped booking first-vaccine appointments, although they will still honor appointments that have already been made.

The city does, at least for the time being, plan on keeping vaccinations rolling along at community health centers, which the state views as highly efficient ways of administering doses quickly. CHCs also have the added benefit of being run by medical professionals who have built up trust in their communities, and officials have said they hope the sites are welcoming environments, particularly for people of color or residents who don’t speak English, and who might be wary of lining up for doses elsewhere. CHC appointments are not available to the general public and are only available to current patients.

You do not need to be an existing patient, however, to get vaccinated at one of Boston’s open-access sites, for which the state has partnered with Boston Medical Center to give shots in non-clinical settings like the YMCA. Five of these sites are up and running right now, in Hyde Park, Mattapan, Dorchester, Roslindale, and the South End. They are open to anyone who is currently eligible in Phase 2, which right now means anyone over 75. So far they appear to have had success in vaccinating underserved communities: 60 percent of its vaccines have gone to people of color, according to BMC. These sites were not impacted by the state’s recent pivot away from providing vaccines to hospitals.

Major pharmacy chains have also been tapped to distribute vaccines, as part of a federal program through which doses are shipped directly to the stores. In Boston, five Walgreens and three CVS locations are now booking appointments for the shots. Outside the city, several of the state’s large supermarket chains have also signed up to give out vaccines at their pharmacies.

A small pilot is underway to test out whether and how to run a mobile vaccine operation capable of going door-to-door to reach vulnerable residents who might not otherwise leave their homes. It’s not yet clear whether the approach will be adopted at a larger scale.