One of the biggest, and strangest, stories of the year is playing out right in our backyard. 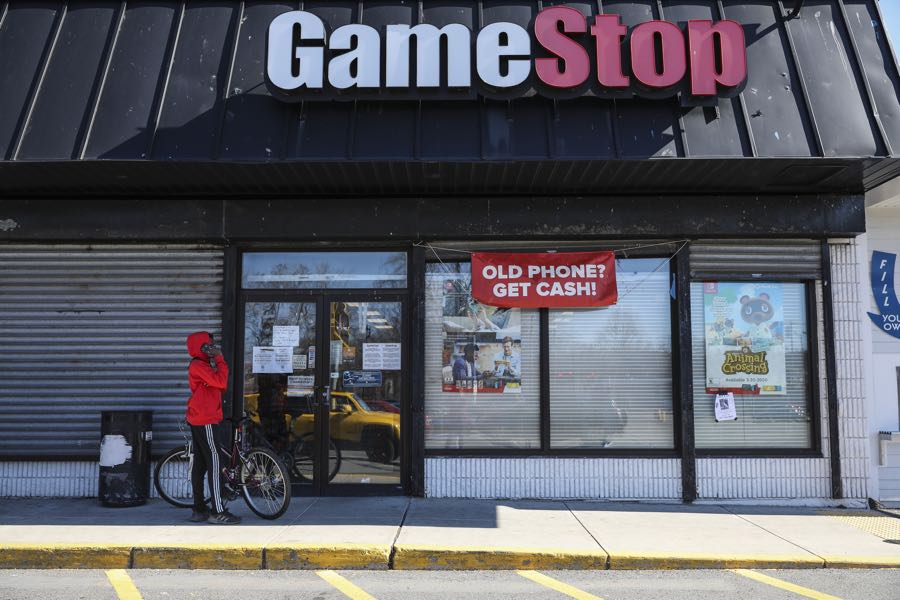 A young boy waits outside of GameStop to pick up a purchase in Roslindale, MA| Photo by Erin Clark/The Boston Globe via Getty Images

Any number of news events might have been predicted for the beginning of 2021, but the one that took perhaps the most people by surprise was the sudden surge in stock price for ’90s nostalgia-fest video game retailer GameStop, as small-time investors drove up the stock of the flailing company and put the hurt on powerful hedge funds who’d bet against the company. Turmoil caused by the stock’s wild rise and fall has since caught the attention of Congress, which plans to hold a hearing on Thursday at which many of the major players will be asked to testify. Some local voices may get a shot at questioning them: Reps. Ayanna Pressley, Stephen Lynch, and Jake Auchincloss all serve on that committee.

While all roads in the GameStop story lead to Wall Street, the fiery heart of American greed, the case and many of its key figures—a vulgar YouTube celebrity, a hedge fund titan, an author scrambling to lay claim to the story in real time—have roots in Boston, ensuring this saga will be very much a local one as it continues to unfold.

Here’s a who’s who of local names tied to one of the strangest and most talked about stories of the year, and where it goes from here:

The profane, headband-wearing YouTube and Reddit star credited with kicking off the rally behind the GameStop stock operated in relative anonymity for much of his career as a niche internet celebrity going by the usernames “Roaring Kitty” and “DeepFuckingValue.” But as the GameStop story gained steam, he was outed by reporters as Keith Gill, a 34-year-old Boston-area dad, who had been streaming his bullish opinions on GameStop from the basement of his Wilmington home. Gill grew up in Brockton, was a track star at Brockton High and at Stonehill College (where he holds a school record and in his heyday could nearly run a 4-minute mile) learned the investment trade in New Hampshire, and until recently, worked as a financial advisor with Springfield-based MassMutual.

At Thursday’s hearing, he is expected to answer questions about the role of sites like Reddit in the new wave of social media-fueled retail investing, and whether his or his online comrades’ aggressive promotion of the stock amounted to illegal stock manipulation. On top of that, he is now targeted in a class action lawsuit that alleges he used his skills as a sophisticated trader to manipulate amateurs and drive up the stock price for his own benefit. He is also a townie at heart: He’s told reporters he wants to use some of his massive earnings to build a track facility in his hometown.

The Massachusetts Mutual Life Insurance Company, Gill’s former employer, is not being called to testify this week, but it has faced questions about what it knew about Gill’s side gig as a finance influencer while he was on their payroll, and whether it has done enough to monitor employees’ activities on social media. Secretary Bill Galvin’s office has come knocking, and while the details are a little foggy, an investigation is certainly underway. MassMutual is also named in the same class action lawsuit that’s going after Gill.

Galvin, whose role includes overseeing securities in the state, has also been a prominent critic of the app-based trading company Robinhood, whose army of users helped drive up GameStop’s price. His criticism predates the frenzy: In December, his office filed an official complaint alleging the company was illegally preying on rookie investors with a “gamified” app and enabling them to make risky bets they didn’t fully understand on the platform. During the GameStop squeeze, he was a prominent voice expressing alarm about the social media-fueled frenzy that led to the wild swings we saw with GameStop. He featured prominently on CNBC during the turmoil and emerged as a major villain in the eyes of the Reddit crowd when he called for drastic action during the price surge, including a 30-day halt on trading the stock.

In a development that should surprise no one, one of the major players in this Wall Street saga passed through Harvard’s vaunted campus. Ken Griffin, who as CEO of the powerful investment firm Citadel is one of the most influential figures in finance (and a GOP mega-donor), got his start in the industry as a Harvard undergrad in the go-go 1980s. He reportedly started trading from his dorm room after convincing the school to let him install a satellite dish atop the Cabot House roof. Expect Griffin to be asked about whether his firm influenced Robinhood’s much-criticized decision to stop its users from buying GameStop stock at the height of the surge. Citadel has denied allegations of collusion.

It made perfect sense for Boston’s own Mezrich, the prolific author known for telling stories about young geniuses who use their smarts to upend existing systems and get filthy rich (his work inspired the films The Social Network and 21), to take an interest in this case. He wasted no time in doing so. While GameStop was still leading news outlets around the world, he signed a deal with MGM, which bought the rights to adapt his book proposal on the ordeal. Set to produce the yet-to-even-be-written-book-turned-film? The Winklevoss twins, who Mezrich’s fans will recognize as the uber-privileged foils of his Facebook book and the biopic it inspired, and the protagonists of his most recent book Bitcoin Billionaires.

Long an advocate for strengthening the SEC, Warren is also back in the spotlight in the wake of the GameStop situation, and has called on regulators to launch a transparent investigation into exactly what happened. Warren, who made a career out of criticizing the way Wall Street is run, has shared concerns about the way trading apps responded to the surge, how big-money investors managed to profit off of the stock’s swing upward, and of how hedge funds have gotten away with “rigging” the market in their favor for years, to the disadvantage of the little guys. She may get the chance to question some of those involved soon: A hearing with the Senate Banking Committee, of which she is a member, is likely coming up soon.