They're not meeting on Beacon Hill. They're the newest kind of social media influencer. 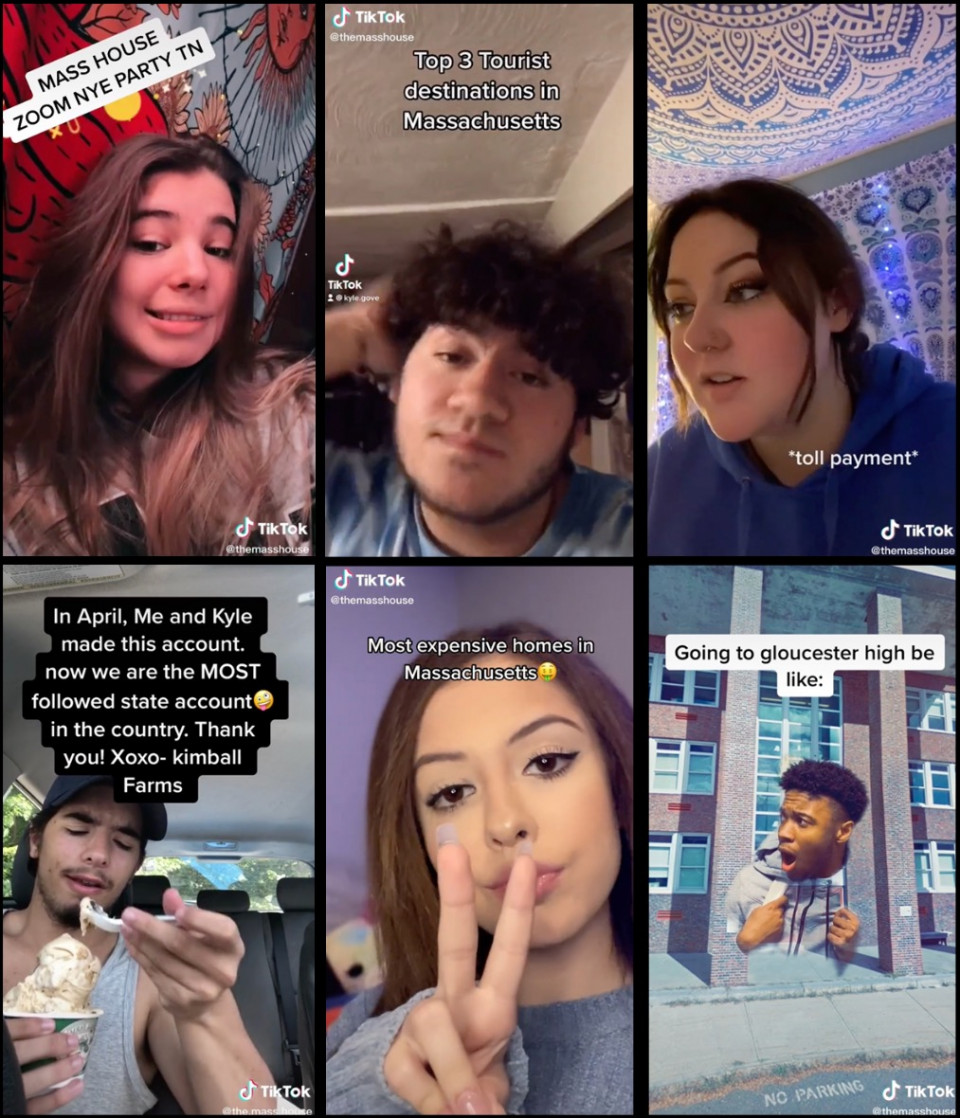 In some ways, Alexis Kimmey’s quarantine life sounds familiar. Like everyone else, she spends all day thinking of things to post online, something she hopes will play well to her followers, and then whips up a quick video to post. But there’s one key difference between when she does it and when you do it: When Kimmey does it, thousands upon thousands of people watch.

That’s because Kimmey, a 19-year-old Everett resident, is the most frequent contributor to The Mass House TikTok page. The account has over 73,000 followers and posts about five times a week on such varied and hyperlocal topics as restaurant reviews, overviews of different cities and towns, college life commentary, as well as general TikTok trends done in a notable Massachusetts location. Some recent fan favorites: a post about getting off the wrong exit and having to pay the toll at Logan airport, and Kimmey’s round up of the some of the most expensive homes in Massachusetts, which were each viewed more than 50 thousand times. Since Kimmey isn’t currently at school and following careful quarantine protocols because of at-risk family members, she’s taken over the majority of the posting responsibility.

If the account name is drawing to mind visions of the gold dome on Beacon Hill, it shouldn’t—The Mass House is a local iteration of the newest trend in internet fame, in which influencers and other content creators gather under a common account and, usually, under a common physical roof. With everyone stuck at home and desperate for distractions, TikTok has boomed as the ultimate time killer, home to thousands of varied, and creative, short clips, all algorithmically catered to your interests, no less. Because The Mass House was born during a pandemic, however, this TikTok house is solely online. Founded over the summer by Bay Staters Mario Pizzi, of Everett, and Kyle Grove, of Revere, after they spotted each other’s similar, Mass-specific content, the account now has 10 members, all from Massachusetts and all with online followings independent from the TikTok house.

That was part of the appeal of joining the House, Kimmey says during a group Zoom call with other members of the house. “On my personal TikTok, I didn’t really have a lot of followers from Massachusetts, and I really want to connect with people from where I’m from, and so joining The Mass House felt really good.”

On their own accounts, members can post about whatever strikes their fancy, or in whatever subject area they want to be known for–Kimmey, for example, tries to recreate the viral posts that brought in all the followers on her personal account: “How to glow up in 2 weeks,” for example. But gathering under one virtual “roof” helps them access a new audience, leverage each other’s existing followers, and create a different genre of video.

When one of the members spots someone who might be a good addition, the prospective new member is added to a group chat with all the housemates to discuss joining. Sammy Enayo, 18, from Medford, says that one day he was “randomly added” to a Snapchat group by Hewes, who only knows him through TikTok. If it’s a good fit, like Enayo was, they’ll usually wait about a month before introducing the new housemate to the account while they parse out how to integrate the new addition. And while the process is a little looser right now, co-founder Grove says the group is working on creating a schedule for posting, with each member allocated their own posting days.

It’s the latest frontier on the constantly shifting territory of digital content creation. Like Vine, the beloved but short-lived short video service eventually shut down by Twitter, successful TikTok videos thrive on the editing skills of people with a keen sense of how to cut together a compelling short video seamlessly. And also much like on Vine, the most skilled practitioners skew young. The members of The Mass House are no different—the group is made up of teens and other young adults from around the state, ranging in age from 18 to 21.

But their audience isn’t limited to their peers. “Older people go crazy for Mario’s restaurant reviews,” says Kristen Hewes, 21. Although the restaurant reviews seem to have petered off as of late, Pizzi’s top five ice cream shops list has over 200 thousand views, and more than 30 thousand likes. But Hewes, a Wheaton University student, tends to cater her videos to college students, with hits like “what does your college say about you.” (Northeastern students party harder than they appear, she says.) This varied content and influencer mashup has led to a decent level of popularity for The Mass House. According to a Pizzi post, The Mass House has become the most followed “state house” on TikTok, beating out the likes of New York and New Hampshire.

Such is their popularity that when the House hosted a Zoom party, a sort of online meet and greet, for New Year’s Eve, the waiting list to get into the video conference was more than 1,000 fans deep. “We were on from 11:30 to what? 4 a.m.?” says Carly Clifford, an 18-year-old Rockland native, who’s a bit more of a generalist when it comes to subject area. “5 a.m.,” Hewes corrects. Pizzi also says that he was “banned from a mall for three years” after an attempted meet and greet that quickly grew too popular online, threatening to break pandemic protocols. Almost all of them have been recognized out and about in the state.

They’re turning this popularity into cash. Hewes says that the group recently applied, and was subsequently accepted, to be a part of TikTok’s Creator Fund. The Creator Fund is a way for the app to directly pay their most popular users. “We’ve made a fair bit of money,” Hewes says. But the group isn’t stopping now—they have big plans to invest the money into improving the account. There’s a temporary goal of 100k followers, says Grove, but they’re not stopping there. He wants to start trying to connect with the fans via little giveaways on the account. And naturally, Pizzi says there are plans in the works for putting out merch. They also want to somehow acquire a physical house by the summer. “We’re going to get an Airbnb to see how it goes,” he says.

So far, it seems like the goal is just to continue to grow, and to keep expanding off of their local fame. In the group call, the members express a collective desire to continue to grow their online presences and social media influence. It’s clear that joining the house is a great tool in doing so. “I just think it opened up a lot of opportunities for us that we wouldn’t have had,” says Hewes.