Who Gets to Be Bostonian Onscreen?

I’ve spent my whole life living in a diverse melting pot of a city. So why isn’t that the Boston I see on-screen? 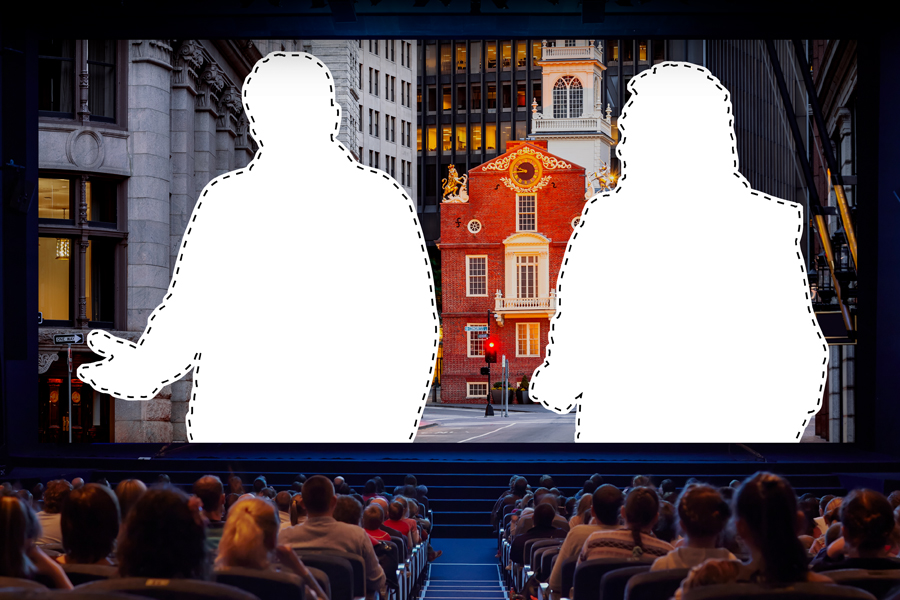 Teyonah Parris may be making headlines these days as Monica Rambeau on the Disney+ Marvel series WandaVision, but watching her trade quips with the Scarlet Witch wasn’t the first time I’d seen her. I first became familiar with the actress as a regular on the Starz series Survivor’s Remorse, which ran for four seasons between 2014 and 2017. The show follows the exploits of Cam Calloway, a fictional NBA star from Dorchester, and his family after he receives a huge contract to play in Atlanta. Parris costars as Missy, the wife of Calloway’s cousin and agent.

Survivor’s Remorse received mostly positive reviews during its tenure, but it stuck out to me for another reason: It was the first time in my almost 40 years on the planet that I’d seen a television show about a Black family from Boston. Unfortunately, in the pilot, the family of Black Bostonians was immediately moved. The disappointing decision to set the show outside of Boston was widely criticized as an effort to get around the fact that most Black Americans have, shall we say, a less-than-positive opinion of Boston, and if these Black Bostonians were going to have a chance at being well received or accepted by a wider audience, the setting had to be a city universally regarded as somewhere Black folks thrive. It was all the more painful to witness given how much of a rarity it is to view this version of Boston on-screen.

Think about it: When was the last time you saw a pop-culture representation of the city that wasn’t centered on whiteness? Whether we’re talking about episodes of The Simpsons, Samuel Adams beer commercials, Saturday Night Live sketches, network sitcoms, dramas, or Hollywood films, the default depiction of a Boston resident is usually a white person with some semblance of a supposed “Bahstin” accent. As a kid growing up here, this made me feel as if I didn’t exist or was invisible. In 2021, this depiction of Boston as a white paradise is just plain baffling to me considering the city today is only 45 percent non-Hispanic white.

Depictions of Boston Public Schools in films and television are no different. Whether you’re watching a show such as Boston Public or a film like Fever Pitch, you’ll see the camera pan across a classroom that is overwhelmingly filled with white students—when in reality whites represent a mere one out of every seven BPS students. “One of the biggest perpetrators of implicit bias is film and television,” says Malia Lazu of MIT’s Sloan Management, who has spent her career speaking out on behalf of Boston’s communities of color. “Deciding who gets to be seen is deciding whose lives matter. It shapes the perception whites have about people of color and removes people of color’s power to own the narrative.”

Needless to say, this Hollywood whitewashing isn’t good for Bostonians of any color. It tells non-white Bostonians that they are not worthy of acknowledgment and are, in effect, nonexistent, while supporting a negative view of our city among non-whites throughout the rest of the country. At the same time, it reinforces and lends credence to an existing, widespread perception about the city—that it is nothing but a bastion for white racists. The reality in Boston, however, is not so black-and-white.

In the Boston I grew up in, my friends and I were constantly learning about new cultures and being exposed to perspectives from both first- and second-generation immigrant children, who shared their experiences integrating into not just American culture, but Boston city culture, too. What makes Boston such a vibrant and wonderful place is this unique cultural exchange.

I was among the children who grew up listening to reggae, calypso, and soca on the weekends from WILD, then switched to KISS 108 FM and WBCN, only to settle on WRBB to hear rap played at night. We heard Latin hip-hop and freestyle blaring out of stores like Tello’s in Downtown Crossing and windows in the South End/Lower Roxbury and Jamaica Plain, while salsa and merengue poured from corner-store radios and passing cars. Being in close proximity to one another, it became our collective experience. It is an experience that people tend to only associate with the boroughs of New York, largely due to the fact that that’s how New York—and not Boston—is portrayed on film.

The truth is, non-white Boston communities are almost completely missing in action in mainstream media. Shows rarely deal with populations that are part of the fabric of the metro Boston area, such as our Puerto Rican, Dominican, Haitian, East African, and Cape Verdean residents, all of whom have lived here for generations. Rarely do we see any representation of the Asian community, even though Chinatown has been in existence since the late 1800s. Instead, we see story after story centered around Irish or Italian Catholic families, even though that is far from representative of the Boston I was born and raised in.

Even when characters of color are depicted on Boston-based shows, Hollywood just can’t seem to give them their due. That’s why Showtime’s City on a Hill, now in its second season, makes for some pretty frustrating viewing. One of the main characters of the show, Decourcy Ward (played by Aldis Hodge), is an assistant DA from Brooklyn who comes to Boston to tear down the corrupt system. But wouldn’t those who most want to destroy Boston’s corrupt system be born-and-bred Black or Latinx Bostonians—as opposed to an out-of-towner? So while we have a well-respected Black actor in the lead role of a show set in Boston, Black Bostonians still experience erasure by not being allowed to be the hero in a story about us.

Meanwhile, I still wince thinking about “Sympathy for the Devil,” a 2010 episode of the TNT series Rizzoli & Isles, which misrepresented Boston’s Cape Verdean population and received an overwhelmingly negative response from Bostonians on social media as a result. On the one hand, it was one of the rare times a show has even acknowledged that Boston has non-white communities; however, as one displeased Cape Verdean from Boston noted on the IMDb website, the episode had characters wearing clothes from Central African nations and conflated Haitian and Cape Verdean cultures. “The whole portrayal of Cape Verdeans in this episode,” the commenter said, “is just bad and wrong.”

It’s not just TV and movies, of course, that shape the public’s idea of Boston. Comedic skits, commercials, and viral videos and memes all tend to cling to stereotypical representations of Masshole life. The now-famous Hyundai “Smaht Pahk” commercial, for instance, made clear who Hollywood thinks fits the mold of a Bostonian. All of the Massachusetts natives in the commercial with “Bahstin” accents were white, including Rachel Dratch, Chris Evans, and John Krasinski. The only person of color, David Ortiz, is a sports legend from the Dominican Republic. Why the producers didn’t simply hire well-known Black Bay Staters such as comedians Sam Jay, Marlon Webb, or Reedo Brown, in addition to Ortiz, is beyond me. If the argument is that none of those comedians has the mainstream recognition of the film and television stars I previously listed, Hyundai could’ve easily included WWE superstars Sasha Banks and Kofi Kingston.

The problem, though, rarely boils down to a lack of available star power—often, the lack of representation is simply because people of color aren’t considered “Boston” enough by the public or by ad executives and casting agents. Many productions have been set in Boston and the surrounding towns over the past 20-plus years, but when I’ve looked at the casting ads for extras and bit parts, they often ask for an “authentic” Boston accent. As someone who was born in the heart of the city, I can tell you that calling that accent “authentic” is a misnomer. It’s actually more prominent the farther out you venture from the city—you can hear it as far afield as Maine and New Hampshire. What this does is promote the fallacy that non-white local residents, who typically don’t have this accent, somehow aren’t “authentic” Bostonians, even though we’ve lived in the area our entire lives.

There’s no reason why Massachusetts natives such as Bill Burr, Lenny Clarke, Denis Leary, and Ben and Casey Affleck should always be cast as Bostonians when Michael Beach, Brian White, Uzo Aduba, Diane Guerrero, Mindy Kaling, and Donnie Yen rarely, if ever, have the same opportunity. Ultimately, a big share of the responsibility lies with the Boston natives who make it in Hollywood and go on to own production companies and hold sway with networks and film studios. “Boston has become a self-fulfilling prophecy. It is seen as a hostile, white-centric city, an identity enthusiastically promulgated by its successful white progeny,” says Howard Bryant, a Boston native, ESPN senior writer, and author of Full Dissidence: Notes from an Uneven Playing Field. “They elevate and promote themselves, distort the city’s makeup by excluding its successful minorities, make the city look like it is by and for only white people—and then complain when the city reflects those choices. This is the only city I know of that consistently refuses to claim one of its own—unless they’re white.”

In other words, instead of highlighting or signing off on screenplays, projects, and pitches from Bostonians of color, successful Bostonians in Hollywood are using their positions to perpetuate the same tired Boston tropes about a city they know full well is racially diverse. To the Afflecks of the world, I say we’ve seen enough shows and films about Southie, Charlestown, the North End, the white parts of Dorchester, or Massachusetts towns seemingly devoid of brown residents. It’s time to pursue a family drama set in the South End/Lower Roxbury about a multiracial group of families that represents the diversity of the city, written by non-white locals. We deserve to finally show the world what the place we actually grew up in and live in looks like. And the world deserves
to know.