Here’s Looking at You, Extra-Long Massachusetts of 1783

The debate over D.C. statehood has revived the forgotten supersized version of the Commonwealth of yore. 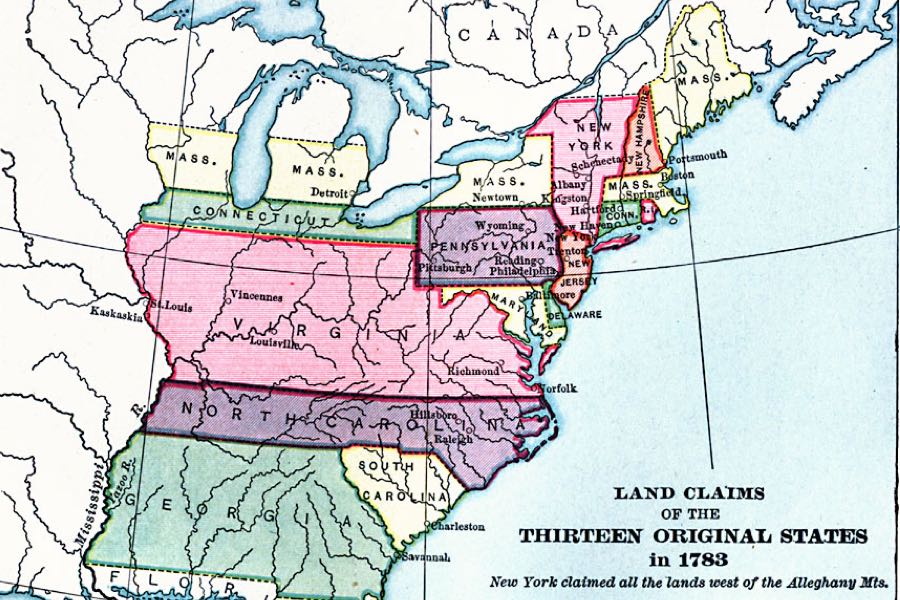 Courtesy of the Florida Center for Instructional Technology.

It’s loud. It’s proud. And it is looooong as hell.

Allow me to introduce you to Extra-Long Massachusetts, the forgotten jumbo-sized version of the Commonwealth that I’m going to assume you did not know existed, but which totally did, kind of.

If you were aware of its existence, congrats on having an impressive command of obscure American history. But for many of us, our first introduction came this week, when an image of a 1783 map of the 13 original American states traveled far and wide on the internet. It emerged in a tweet amid the ongoing debate about whether to grant D.C. its long-sought statehood, in which a user cracked a joke about a different peculiarity in land claims from the time: a truly massive version of Virginia.

Don’t talk to me about the founding fathers not wanting DC to be a state unless you also support Mega Virginia. pic.twitter.com/GWBOgxPxMO

But naturally my eyes were drawn not to the absolute unit that Virginia once was, but to the hilariously elongated edition of our fair state. In 1783, apparently, Massachusetts’ land claim extended west through much of what is now upstate New York, leap-frogged over four of the five Great Lakes, and encompassed rectangular chunks of what is now Michigan, Illinois, and Wisconsin. (It also at that time included what is now the state of Maine, but that’s a much more commonly known piece of American history [by which I mean that I, an admitted history dunce, knew about it]).

Look at that thing!

Just to be sure that this is not some kind of historical prank, I reached out to Boston College history professor emeritus Jim O’Toole, who confirms that this 1783 deluxe edition of Massachusetts is neither spoof nor goof. In fact, the super-wide Massachusetts was technically even wider than this—the map stops at the Mississippi River, after all. The claim, O’Toole says, was based on a 1629 charter from the King of England that said Massachusetts would extend from the East Coast all the way to the “western ocean.” Early settlers, obviously, had no idea where that ocean might be, so the colony went west indefinitely, and on paper would have included coastal Oregon.

So it’s very much real. But at the same time, O’Toole tells me, we shouldn’t take it all that seriously. Even the Massachusetts residents of the time didn’t. Our predecessors were naturally much more concerned with what was going on near the Atlantic. No one ever voted or paid taxes in Massachusetts from out in that wilderness. Given the makeup of the landscape at the time, it would have taken months to even visit.

“I think of it as a kind of amusing little factoid,” O’Toole tells me. “It was one of those things that may have been true in theory, but was so completely implausible in practical terms that it wasn’t considered. It’s kind of like staking out a claim on the moon.”

Put another way, if the founders were selling novelty Massachusetts pride T-shirts, this ancient and theoretically infinite West Mass probably wouldn’t have made the cut. So when new states were added to the Union, no one in Massachusetts batted an eye when our chunk of the Midwest slipped from our fingers.

As we think about this 18th Century artifact, let it be a reminder that all of the lines we’ve drawn on this continent are similarly imaginary. As many pointed out while this bizarre map from 1783 was making the rounds online, when the king was declaring that this or that chunk of land belonged to this group or that group of European settlers, Native Americans saw things very differently. To the extent that a piece of land belonged to anyone in that era, it was to tribes who’d lived here for eons. Massachusetts itself, you’ll recall, derives its name from one of them. You can even use this map project to learn which tribes were living in all of that extra long Massachusetts at the time.

So while the debate about D.C. statehood rolls on, remember that the state lines are relatively new, somewhat arbitrary inventions made up by American and English dignitaries as time went on. We could wake up tomorrow and decide that Massachusetts is once again a humongous rectangle that travels in a perfectly straight line headlong into the Pacific Ocean, and make it so. Maybe we should!