I Can’t Stop Thinking about the BU Dorm Bat Fiasco

Three students, fending for themselves with a bat in a dorm room, simply bludgeoned it to death. 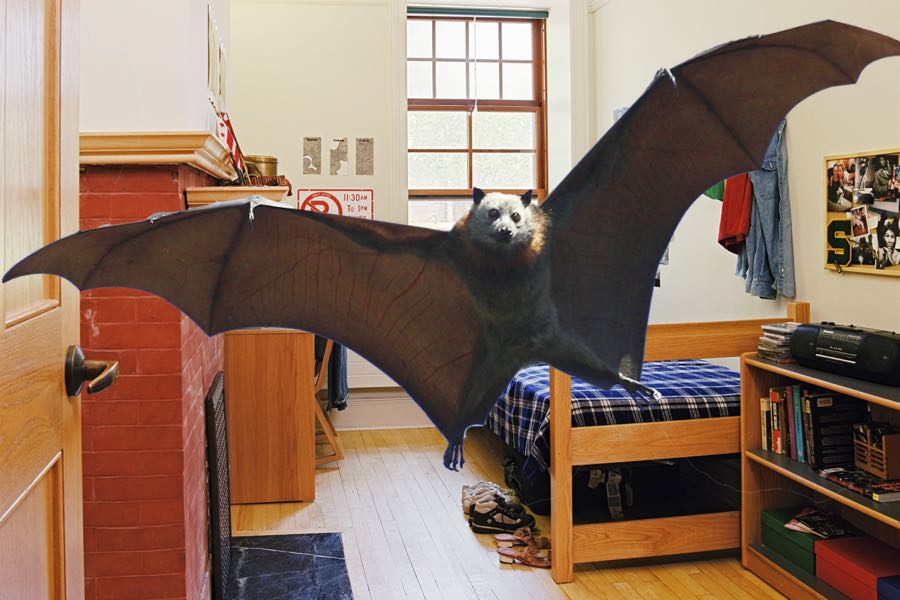 When you show up to a college dorm, there are certain indignities that you accept just come with the territory. You may share a bathroom with dozens of strangers with varying levels of commitment to hygiene, for example. Unpleasant sights, smells, and sounds you might not have dealt with back at home might suddenly surround you on all sides. You might be briefly kept from your bedroom in the middle of the night to give your roommate and a guest some…privacy.

Typically there is payoff to this arrangement, like newfound freedom, lots of new friends, and plentiful access to parties. So you come to expect, and accept, the drawbacks.

But that is exactly what happened to a trio of Boston University students, per a segment about the absurd and terrifying ordeal that aired on student radio station WTBU last week.

The tale is worth reading or listening to in its entirety, but essentially one student says she heard something clattering around in her room after midnight, discovered to her horror that it was a bat and wrangled two neighbors to help deal with the situation. They called BU’s facilities department for help, but say they were told that because it was the weekend, it would behoove them to take matters into their own hands. And boy did they ever. The story goes on to say that the trio “geared up with makeshift weapons” including “a wooden rod,” chased the bat around the room and beat the animal to death, then placed its bludgeoned corpse into a bag.

One of the students involved described the violent ordeal as “primal and just absurd.” Agreed and agreed.

The gruesome series of events raises questions about how exactly BU is accommodating its students at this precarious moment in Boston’s college student history. College students have made extraordinary sacrifices (under threat of severe penalties) to keep the pandemic from getting any worse this year, meaning a lot of the joys of being an undergrad living on campus have been put on hold. Case counts at colleges in Boston have been surprisingly, and admirably, lower than any of us could have imagined. Is this really the best we can do for the young adults we’ve sequestered in dorm rooms with strict rules about whether and how they can socialize?

I asked BU about all this, and for what it’s worth, administrators are very apologetic about the whole thing. In an email, representative Colin Riley attributed the situation to a series of miscommunications and bad in-the-moment calls made in the middle of the night.

For one, he says, students can and do get help for facilities-related emergencies over weekends. What should have happened, he says, is the affected student should have been “temporarily relocated to a buffer room” until the university’s outside pest management vendor, Haverhill-based All Star Pet Control, could respond.

Instead, given the late hour and lack of available resources at the time, facilities staff advised the students on how they might handle the situation themselves. Riley says they were told to open a window to let the bat escape, not slaughter it with brute force. But 15 minutes after that initial call, the students called back to say the bloody deed had been done.

“Facilities Management does not want students to deal with pest control issue[s],” Riley says, adding that the report of the invader bat “should have been treated as a more urgent matter.” By Monday, the pest control experts responded and sealed any possible entry points for any other winged invaders.

Still, what happened happened. There is no evidence anyone suffered bites from the bat’s fangs, although to be safe, one of the students was reportedly considering getting a rabies shot.

So let’s hope the dorm room bat battle of 2021 is just an anomaly in an anomalous year. I think we can all agree that Boston’s college kids deserve a lot better.