How Boston Plans to Respond after the Derek Chauvin Verdict

As the jury announced its verdict, the city prepared to mobilize. 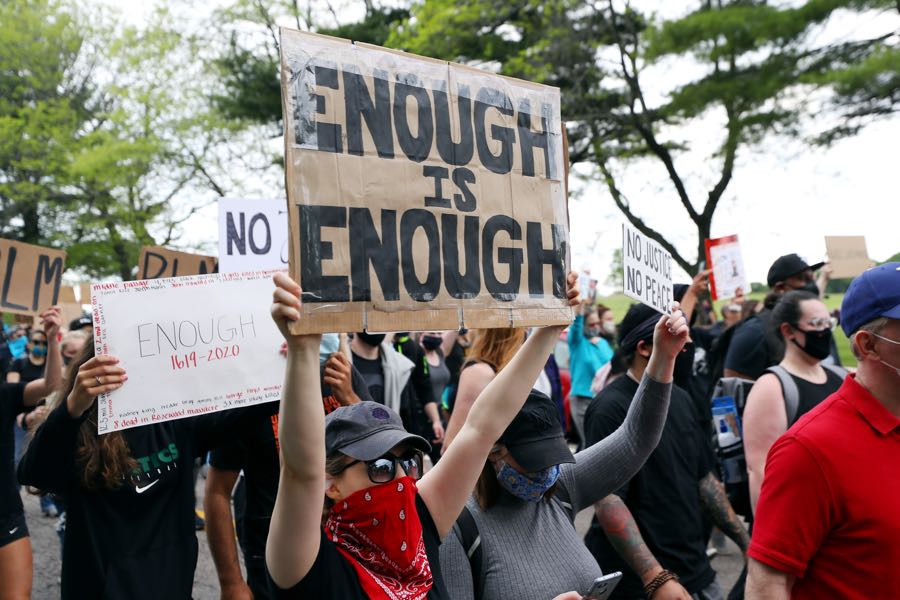 Demonstrators march during a protest in response to the death of George Floyd at the hands of Minneapolis, Minnesota police, on June 02, 2020 in Boston, Massachusetts. The protests have spread across cities in the U.S., and in other parts of the world. (Photo by Maddie Meyer/Getty Images)

Not for the first time in the past year, a sense of anxious anticipation fell over Boston as the city awaited news that could once again see Bostonians take to the streets.

A verdict in the trial of Derek Chauvin, the Minneapolis police officer accused of killing George Floyd, was released at the end of the day on Tuesday, with Chauvin convicted on all counts. Activists in the city had been preparing to respond for some time.

In recent days, several groups had announced plans to hold public gatherings in response to the outcome, whether it resulted in a conviction or convictions, or not.

First up, Mass Action Against Police Brutality said in a post on Facebook that it planned to hold an “emergency press conference” outside the State House at 5 p.m. on April 21. The group said it would be joined by “families impacted by police violence in MA.”

Posted by Mass Action Against Police Brutality on Tuesday, April 20, 2021

The group also has a “Justice 4 All!” rally planned on Saturday, April 24 beginning in Fields Corner.

The Boston May Day Coalition has invited people to gather the following day. “Regardless of the verdict in the trial, it will be necessary to mobilize for justice in Boston THE DAY AFTER THE VERDICT,” the group writes in a Facebook event description. “The murder of Black folks by racist police across the country will continue. All those who support justice for George Floyd are invited to attend a rally and march.”

The trial of Dereck Chauvin is currently being held in Minneapolis, MN. Regardless of the verdict in the trial, it will…

Posted by Boston May Day Coalition on Tuesday, April 13, 2021

The group wrote that if the day after the verdict fell on a weekday, they would gather at South Station at 4:30 p.m. If the verdict were reached on Friday, the plan was to meet in Government Center at 1 p.m., the group said.

Similarly, activists have announced plans to gather in Roxbury’s Nubian Square outside the B-2 police station at 5 p.m. on Wednesday.

🚨 THE VERDICT IS IN THE DEREK CHAUVIN TRIAL…..WE SHOULD KNOW BY 5:00 PM

Acting Mayor Kim Janey on Tuesday said the city was prepared how the city might react to the verdict. Janey was also expected to speak about the trial in a live broadcast at 6 p.m.

“It’s important that we recognize that this is traumatizing for many of us who have seen this over and over and over again, so, important that we also have a trauma response team, and I know that Chief Martinez and Chief Long are working together to ensure, you know, certainly that we have a plan in place,” Janey told reporters Tuesday, adding, “I would certainly encourage anyone regardless of what that verdict is to stay engaged in the work. Even if justice is served in this case it does not mean that the work is over.”

Streets blocked off in and around Downtown Crossing. #Boston25 pic.twitter.com/bpzlgEDzMJ

It’s also likely that any Boston protest in the wake of the Chauvin verdict will have something to say about the recent revelations surrounding the police in their home city. News that BPD knew as early as the 1990s that former officer Pat Rose had been accused of sexually abusing children, yet allowed him to remain in his post and ultimately ascend to a leadership role in the Boston Police Patrolmen’s Association, has fueled renewed outrage directed toward the department in recent weeks. Rose is now accused of assaulting six children over the course of more than two decades.

Janey on Tuesday finally released a batch of internal affairs files related to the Rose scandal, which police and City Hall under the previous administration had refused to make public. Janey said Tuesday in a statement to the Boston Globe that it was “clear that previous leaders of the police department neglected their duty to protect and serve,” adding that, “Despite an internal affairs investigation in 1996 that found credible evidence to sustain the allegation against Rose for sexually assaulting a minor, it appears that the police department made no attempt to fire him.”

Last summer, as protests against police brutality swept the nation, mass demonstrations in the city were tens of thousands strong. They grew violent in late May as police clashed with demonstrators, some businesses were damaged, and 53 people were arrested.

An uneasy feeling set in months later, as the results rolled in for the contentious 2020 presidential election. Businesses with plywood covering their windows braced for impact, and Gov. Charlie Baker had the National Guard on standby. In the end, thousands gathered downtown in what turned out to be a largely celebratory, and nonviolent, affair.