Another Summer of Fireworks Hell Is Coming to Boston…Or Is It?

The warmer weather could mean those constant booms are back. But it doesn't have to be that way. 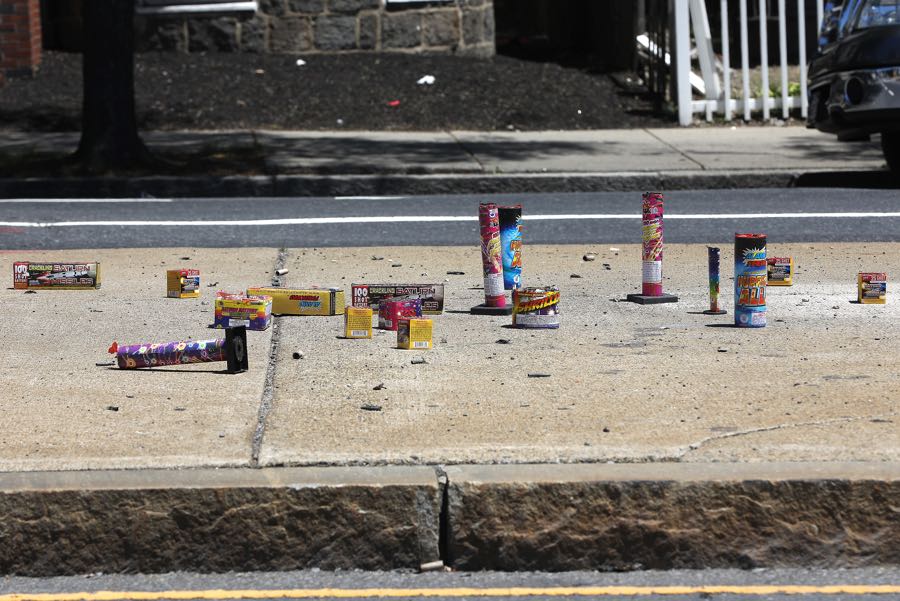 Like more or less everyone in Massachusetts, I’ve been known to appreciate some good illegal fireworks every now and then. Nothing beats blasting off a couple bottle rockets off in the driveway on a warm Fourth of July evening. There’s a guy in my neighborhood who lights absolute heaters in the street—like, with semi-professional sized booms—every year, and the enthusiasm he engenders among his neighbors is a kind that simply can’t be matched with the kinds of activities that aren’t frowned upon in the eyes of the law.

But let’s be clear. The fireworks situation in the city of Boston last year was not fun at all. At a time when we were all still getting our pandemic sea legs, what felt like thousands of cooped up Bostonians took to blowing off steam by launching off a seemingly endless array of bangs, whistles, crackles, and booms at all hours, any day of the week, without warning, and for no reason in particular. It turned a beloved American pastime into a menace, especially for the more vulnerable members of the community, like people with post-traumatic stress (or people whose nerves were just particularly frayed in a horrific year) and those whose pets’ adorable little brains couldn’t comprehend why all these loud sounds kept intruding on their space from every which way. At one point last year, the number of firework incidents reported was up more than 5,500 percent over the prior year.

New Hampshire was empty, and all the fireworks were here.

With warmer weather returning, Boston risks returning to the bad old days of 2020’s fireworks hell. By some indications, we’re already on track for a repeat. There were 36 reports of illegal fireworks logged by the Boston Police Department in January of this year, up from six in 2020. In April, there were 30 such reports, up from 20 the previous year.

But it doesn’t have to be that way. This year, officials in Boston are trying to get ahead of the problem, and urging people to keep their pyromania to a respectable minimum in 2021.

“This is a serious concern,” acting Mayor Kim Janey said in a recent interview with GBH, identifying illegal fireworks as among the topics she was discussing with her team as early as March, when she was first sworn in. “We’ll be looking to crack down on that by being proactive and trying to get ahead of it before summer even gets here.”

City Councilor Julia Mejia, who last year hosted an online forum on the issue, says on-the-ground outreach will be key as we head into peak firework season. She and a Fireworks Task Force that launched last year are working to get an early start on fireworks prevention this year. They aim to partner with small businesses, community groups, and civic associations to get the word out, as well as enlist help from the faith community to include anti-fireworks entreaties in their services. They also plan to distribute literature in bodegas, barber shops, and hair salons beginning in May.

“While people are getting their hair done, it’s a good opportunity to talk about if any of those folks are also the culprits of the fireworks, to help educate them about the importance of being mindful of their neighbors,” Mejia says. “We want to make sure that we’re creating as many avenues as possible for folks to be engaged and to be able to have the tools that they need to be able to have these conversations on their own block.”

There are, of course, penalties for using fireworks. State law sets fines for firework possession at between $10 and $100, and some of Mejia’s colleagues in City Hall, among them Councilor Ed Flynn, have called for tougher fireworks laws in the city. But Mejia and many others who spoke up about the issue last year amid protests against police brutality prefer a more community-minded approach to the problem that doesn’t involve calling or interacting with cops.

She has also suggested some other creative, potentially controversial solutions, like allowing people to blast off their illegal fireworks at specified dates and times and in controlled environments, with the fire department nearby. People are almost certainly going to light fireworks, so why not control the chaos a bit?

Ideally, people would just cut it out, but for those who will not be able to help themselves this year, her message is this: Please don’t be stupid.

“I would say don’t do it, period. But that’s like telling a kid not to eat candy at a candy store, right? So I would say if you’re going to do it, do it safely. Be considerate of your neighbors. Don’t do it after 10 p.m. Practice caution. Be careful of setting off a fire,” Mejia says. “And the fact of the matter is that it’s illegal. And you can get fined for it. So you should just keep that in mind as well.”

A campaign from state officials last year that targeted out-of-state fireworks dealers could also pay dividends this summer. Last year, Attorney General Maura Healey threatened legal action against the owners of Phantom Fireworks for sending fliers advertising its products to Massachusetts residents. Phantom whined publicly about it, but agreed to knock it off.

The city under Mayor Mary Walsh’s leadership also tried to attack the problem head on, bringing it up frequently in his regular COVID-era press conferences, and pushing the message in a public service campaign, with an emphasis on the toll on PTSD patients. So I’m sure we can expect more harrowing tweets like this:

Lighting #fireworks can cause severe scarring that can last a lifetime. Injuries include burns, loss of fingers, cuts, and loss of hearing.

Mental health professionals say they will once again urge people to consider the toll their fun is having on people living with post-traumatic stress disorder, for whom the sound of fireworks can trigger immense terror. The combination of pandemic anxiety and fireworks anxiety was a heavy burden for PTSD sufferers to bear.

But there are hopeful signs that things might not be quite as bad this year, says Luana Marques, an associate professor at Harvard Medical School and clinical psychologist at Mass General. She says she has not gotten the sense that patients are dreading the return of fireworks season. “I think the landscape is different this year. There’s more hope. People are vaccinated. The unrest we saw [in last summer’s protests] is different currently,” she says. “The people I’m talking about are actually anticipating a better summer in general, and feeling like they’re coming up for air.”

Let’s all do them a favor, then, and keep that air gunpowder-free.