The Unlikely Rise, and Uncommonly Wide Appeal, of Boston’s “Be a Man” Guy

The 62-year-old's breakout stardom on TikTok has made him the city's latest mega-celebrity, basically overnight. 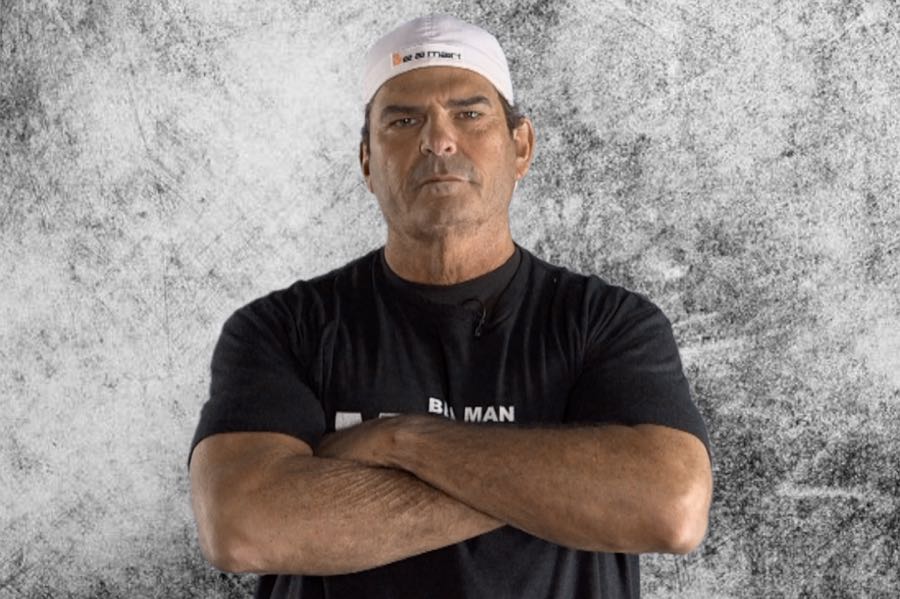 The format is simple. A gruff middle-aged Bostonian man stands in front of a green screen, as thematically relevant images flick by. Soothing mood music plays as he dispenses lightning fast pearls of tongue-in-cheek masculine wisdom, as unseen hype men in the background cackle at the punchlines:

“Don’t use a plate. Always eat over the sink. Be a man.” “When a girl tells you to get in touch with your emotions, punch a hole in the wall. Be a man.”

It’s a format that works. In just a few short months, his stream of roughly 10-second videos has amassed a gargantuan audience on the internet: 1.5 million followers and counting on TikTok, and nearly 300k followers on Instagram. His daily clips have been viewed nearly half a billion times on social media. And for his latest act, he’ll be giving fans the opportunity to see an IRL Be a Man Experience in a headlining show at the Wilbur Theater on August 5.

So who is this man? And why are millions of people on the internet obsessed with him?

He goes by the nickname “Harmon” (and no, you’re not going to find a last name here—he tries not to reveal his actual identity to preserve what privacy he has left). He’s a 62-year-old mortgage salesman who lives on the North Shore. And aside from a few skits with some friends over the years, he has no background in comedy. Until very recently, he was barely aware of what TikTok was. And telling one-liners on the internet has completely turned his life upside down.

“I’m pissed because I was getting ready to retire and it looks like I’m gonna be working a little while longer,” he deadpans. “So I love the fans, but I hate them.”

Harmon’s “Be a Man guy” character is the brainchild of a group called Breaking Balls, a trio of Massholes that includes Harmon’s brother. For the past five years, the group has been producing video content, mainly for YouTube, out of a modest film studio in Swampscott. The “Be a Man” videos weren’t initially a TikTok project—they were created to be segments on a zany YouTube talk show called “I Love Mondays.” The group wanted to write compact one-liners packed with takes from a man’s man, the types of tough, short-tempered, and naturally hilarious fellas they’d grown up with around Boston. With Harmon’s younger brother Carlo already on board as host Mr. Monday, their casting choice for the bit was clear.

“We needed someone who really looks like he’s been through it,” says Joe McCall, the group’s creative director. “Someone who’s got this real dry delivery, and he looks like he’s ran through a wall before. [Harmon] was ready to go and was like, ‘I’ll do whatever you need.'”

Then back in November, McCall and his collaborators got the idea to post Harmon’s segments on TikTok, and everything changed. A clip that offered some inadvisable advice on tornado safety became a mini sensation, and suddenly Harmon was a star.

Since then, the “Be a Man” videos have been played around the world nearly half a billion times, and developed a rabid cult following. Apolitical, light-hearted, and in most cases family-friendly, the videos manage to appeal to a surprisingly wide cross-section of the internet. Fans run the gamut, from the college bros who quote the best lines to one another, to social justice-minded Millennials and Zoomers who relish seeing a Boomer skewer toxic masculinity. Famous followers include Bill Burr and Kristen Bell, and pro football players like Jarvis Green and the Gronks. The character was even recently embraced by the LGBTQ community, after transgender fans turned one of his jokes (“Don’t be a woman. Be a man.”) into a message of gender identity affirmation.

Part of the project’s appeal is its raw Bostonness, a trait that time and again has attracted a wide audience. Harmon says he comes by it honestly, having grown up the son of an ornery East Boston mailman with a penchant for homespun one-liners. “He was funny without trying to be funny. He was old school, a character. An angry, angry mailman like you read about,” Harmon says. “He had some great sayings and a lot of the ‘Be a Mans’ are spawned from things he said. And Joe’s dad is cut from the same cloth.”

The joke premise that men can be hot-headed or stubborn isn’t new, but the videos have proved to be a potent combination of observing dumb shit guys do, poking fun at guys who make bad decisions because they have Guy Brain, and absurdist one liners in the style of those old Chuck Norris jokes from an earlier era of Internet humor. Men in the “Be a Man” universe don’t use airbags or wear sunscreen, and they certainly “don’t bleed.” On Mother’s Day, they “wake all the kids up, get ’em all excited and riled up, then sneak out and play 72 holes of golf.” The group tells me they’ve recorded 1,500 additional “Be a Man” videos, and are editing and posting them as fast as they can.

♬ original sound – Be A Man

On Cameo, where fans can pay $59 for a personalized message from the “Be a Man” guy himself, he fields as many as 100 requests a week. Some people want him to bully their friends, or offer morsels of tough love. One guy asked him to tell a buddy he needed to “be a man” and break up with his girlfriend. Another wanted a video telling his best friend it was OK to come out of the closet, like a man. He’s even been responsible for telling husbands their wives are pregnant.

All the attention has meant Harmon has suddenly found it impossible to go anywhere without drawing a crowd. Star-struck fans have accosted him at North End restaurants and his local driving range. People spot him on the sidewalk and scream “Be a man!” out their car windows, or pull over to ask for a selfie. On a recent trip with his daughter to Sullivan’s at Castle Island, he says, a crowd spotted his 6’3″ figure and trademark white baseball cap from a distance, and swarmed. “It was like there was a thousand seagulls there and someone threw a bunch of clams on the ground. They came from all directions trying to get a piece of me,” he says. “I had napkins and some blew out of my hand and a bunch of young kids were like, ‘Don’t pick the napkins up. Be a man.'”

Harmon has also been moved by the emotional nerve his videos seem to touch. Guys have written in to say a shared interest in the videos helped them reconnect with their man’s man dads, or cope with depression during quarantine. “There’s a pro athlete who, when he met me, put his head on my shoulder and actually cried—with tears—saying I helped him through some hard times. I don’t know what hard times he was going through, but he was actually sobbing,” Harmon says. “We’ve had a couple people tell us we saved their lives.”

Big picture, though, the “Be a Man” team wants to take Harmon on the road. The test-run will be the Wilbur show, which will feature stand-up from Boston comedians, a live recording of Be a Man’s spinoff podcast, the “Be a Man Experience,” and a competition in which fans will get to pitch their own “Be a Man” jokes in front of an audience.

“My kids say it’s like a dream,” Harmon says. “Kids in their 20s, for them social media is their entire life. To me social media is social media. It amazes me how I could get as much attention as like a movie star or a pro athlete or politician or something. It’s amazing.

“It’s not overwhelming,” he adds, “because I’m a man. I would never be overwhelmed.”