The Site of Al Pacino’s Fake Dunkaccino Commercial Is Gone, But We’ll Always Have the Memes

Fans have been making pilgrimages to the Cape Cod location of one of the year's strangest memes, only to learn the tragic truth. 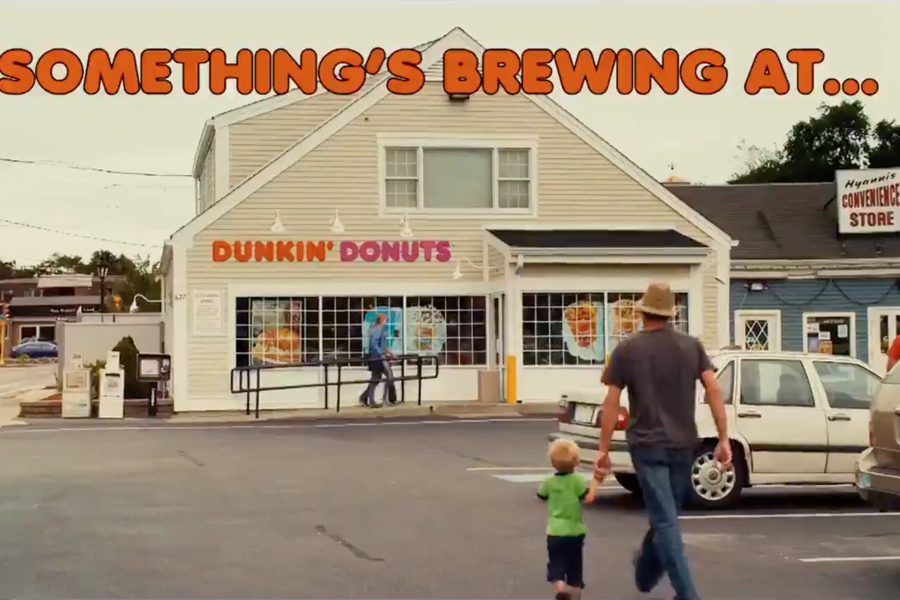 They come from all over just to see it in person: the beige siding, the bubbly orange-and-pink letters, the sunscreen-stocked convenience store with which it shares a small strip mall.

To your average Cape Cod vacationer, there would not be much to recommend this particular, extremely common piece of scenery. But to a select and rabid fanbase online, it has become one of the must-see destinations down the Cape, the kind of place you make sure to grab a selfie in front of on the way to the Beachcomber.

I am speaking of course about the Dunkin’ Donuts on Main Street in Hyannis, best known to untold legions of viewers online as the site of the infamous fictional “Dunkaccino” commercial starring Al Pacino, which since early 2020 has been one of the last year’s strangest, most beloved, and most enduring memes.

In case you’ve managed to miss it, the wildly popular meme stems from a surreal 30-second Dunkin commercial parody sourced from the unloved and largely forgotten 2011 Adam Sandler film Jack & Jill. In it, storied Serpico, Dog Day Afternoon, and Godfather actor Al Pacino proclaims his name to be “Dunk” Pacino, then performs a Dunkin-focused rap and choreographed dance while wearing a donut-themed suit jacket. While the rest of the movie hasn’t inspired this level of attention, fans have been slicing, dicing, and remixing the Dunkaccino bit in every way they can imagine. Some people simply add dance music or the Seinfeld theme. Some go next-level, with popular artists turning it into a cartoon, skilled animators crafting virtual reality renderings, or famous e-celebs making spoofs of YouTuber reviews. Much of the popularity of the meme can be traced back to the Twitter account @DailyDunkaccino, which, as its name suggests, has been posting a new version of the meme every single day since May of 2020, racking up millions of views.

Nearly all begin with the same scene: an establishing shot of the Hyannis Dunks, which makes it very easy to identify with a quick Google search. So it was only natural that people would seek out the object of their fandom to snag a glimpse in person.

Dunkaccino but it’s a re-animated collab (hosted by @UnderMineBlox) pic.twitter.com/iuizCF41rg

However, sadly—devastatingly, even—this particular Dunks is no longer with us. It shut its doors more than a year ago, and is now but a vacant storefront up for sale. Disappointed fans have been sharing their sadness about this fact online.

“Guys,” one of them said somberly in a recent video filmed from the now-famous parking lot, “nothing’s brewing at Dunkin’ Donuts anymore.”

She is not the only one who has made this trek. “Lots of people have made the pilgrimage to this Dunkin Donuts location, which I find hilarious,” says YouTuber Saltydkdan, who has been anonymously running the @DailyDunkaccino account, and has heard over and over again from people who’ve learned of the site’s fate. “The concept that people would take a pilgrimage to see the outside shot of a fake commercial is very funny to me.”

The circumstances of its closure are a little murky, but it appears to have shuttered around the time COVID hit. That’s according to a clerk at the convenience store next door, who filled me in on the unfortunate update over the phone, with the tone of someone who has been asked this very question many, many times.

Fans who could have seen it in person might also have been disappointed. The commercial itself was filmed at an off-site soundstage, which we know because one of the actors in the scene, getting in on the meme fun, recently posted an image of the movie’s call sheet to Twitter. Archived Yelp photos show the Hyannis Dunks’ actual interior was smaller and more run-of-the-mill than depicted in the fake ad—part of the tapestry of comforting sameness you’ll find at most but not all Dunkin’ locations nationwide.

Today, all we have are the memes. To my eyes, the Dunkaccino phenomenon has offered the rarest of delicacies in the darkest of times: something nice on the internet. It’s had the added benefit of giving people a way to express themselves from lockdown. People wore Dunkaccino costumes for their quarantine Halloween parties, and turned in assignments about it in their virtual classrooms. Real-life Dunkin’ “essential workers” staged socially-distanced IRL renditions. It’s too bad people never got to consecrate their fandom with a Dunkaccino to go from the real-life HQ. But oh well. It’s iced coffee season, anyway.

Dunkaccino but the D&D is a mystery dungeon (by @Tealazeal) pic.twitter.com/AvQer5ZczD