Boston Gave Up Hundreds of Parking Spaces to Outdoor Seating. It Should Keep Going

In every neighborhood, cars have been shooed away for lounging and dining. Good riddance. 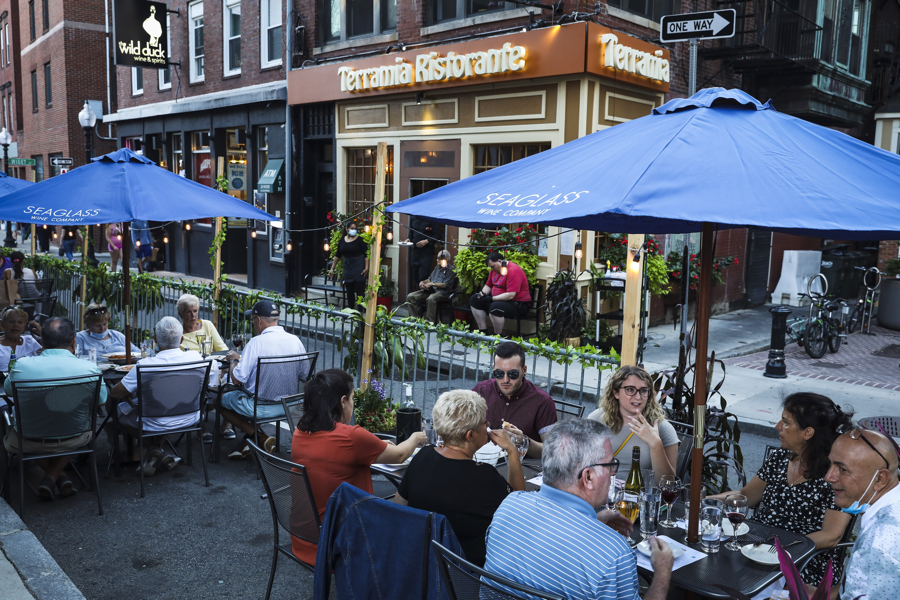 A friend of mine moved to Philadelphia early last year, so he hadn’t seen the new North End—the way it looks in 2021, utterly blanketed with parklets and curbside patios, with hundreds of joyful diners clustered where there were once rows of idle cars. “Holy shit,” he said, as we made our way through the neighborhood on a recent warm Sunday evening. “Is it always like this?”

We have all grown so accustomed to the total renovation Boston’s streets have seen this past year-and-a-half as we sacrificed street parking spaces for outdoor dining and shopping that this radical shift in the use of public space barely registers as notable anymore. It is always like this now, and it didn’t used to be.

We will keep it like this for at least a little while longer. Even as the state of emergency was lifted earlier this month, this particular pandemic perk endures, extended by state law as part of a package of other COVID-era novelties people have grown to like, including expanded mail-in voting and cocktails-to-go. Major improvements to Boston life, all—and we should to everything we can to carry this fervor for patio seating into the future. Boston will be a better, more beautiful, more welcoming place if we do.

Exactly how many Boston parking spots have been converted in this way is hard to say. The city does not track that particular data point, a spokeswoman for the Transportation Department tells me. Nor did the city ask shops and restaurants to specify exactly how many parking spots each would claim for its curbside patio space in the license applications created as part of the Licensing Board’s Outdoor Dining Pilot Program.

What we do know is this: So far the city has granted 556 restaurants permits to host diners outdoors. Of those, 205 are making use of off-street spaces like wide sidewalks, public seating areas, or private property like blacktops and parking lots. The remaining 351 have plunked their patios right on the road, nudging out cars in the process. These new patios vary quite a bit, size-wise. A review of the city’s new policies on this shows the main limitation on how many parking spots a restaurant can gobble up is its length. With a few exceptions, whatever is “contiguous” to the property is up for grabs.

Amazing how good things flourish when the city makes a point of making it easy to do so, and doesn’t let bureaucratic roadblocks get in the way. Hundreds, or perhaps more, street parking spots have been sacrificed for this cause, without causing headaches for restaurateurs. We are undeniably better for it.

There are solid economic reasons for keeping these good times rolling. Some restaurants were able to not only match their pre-pandemic headcount despite capacity restrictions, but increase the number of patrons they could serve in a night—a much-needed boost in revenue after a year of mandated shutdowns. Imagine the ground they could make up if allowed to keep the on-street patios open indefinitely.

Patio dining has also led to the spread of a new DIY artform, as restaurant staff have dressed up their little plots of on-street seating with flowers and lights, building wooden structures and draping them with artificial ivy. Parklets, as these spaces are often called, have been popular for years in cities like Montreal, and now they’ve finally had their big Boston breakout moment.

They have now wound their way into every neighborhood in Boston. Dining destinations like the North and South End, Fenway, and Back Bay, naturally, are crawling with them. Plenty of curbside seating can also be found in Mattapan and Hyde Park, places where previous efforts to spur the dining scene had been less successful. By simply letting diners spill out into the open air, people have new reasons to patronize local small businesses, and are enjoying relaxing Vaccine Summer evenings lingering smack dab in the middle of these neighborhoods longer than ever before.

That before all this, these lovely spots could be taken up by just a car, in a prime location outside a bustling restaurant, for hours at a time, and for pocket change from the owner, now feels absurd. It is absurd.

How we treat parking going forward matters. Traffic is, terrifyingly, back to 2019 levels already, and most white-collar employees aren’t even back to work in their offices yet.

Before COVID, the city had been talking about dipping its toes into the debate about banning cars from downtowns. If and when we get serious about the concept, think of it this way: Imagine if all our newly beloved patios were not limited to the parking spot-sized space eight-and-a-half feet away from the curb. What if the entire street was up for grabs, in warmer months and in the winter? What if streets were not just dotted with dinner tables, but parks, pushcarts, pop-up shops, public art, or even stages for performers?

Broadly speaking, Boston would be better off with less street parking. Parking spots are often what stands in the way of bus and protected bike lanes that would ease commutes and take a bite out of traffic jams. Parking requirements can also add unnecessary speed bumps to the development of housing for disadvantaged Bostonians. As a general rule, a space used for parking would be more useful, to more people, as just about anything else. Outdoor dining is a reminder that every plot of land squandered on giving cars a space to park has the potential to be something much better, something beautiful, something useful. By continuing on a path that sees us delete parking spaces and replace them with outdoor seating, we will rid ourselves of something bad and replace it with something good—like scraping off lead paint and applying a fresh coat.  In the years to come, we should keep that in mind.