Want to Get People Back on the MBTA? Make It More Fun

From water taxis and e-scooters to freebies and buskers, a mostly serious guide to keeping drivers off the streets, and luring them back on the T. 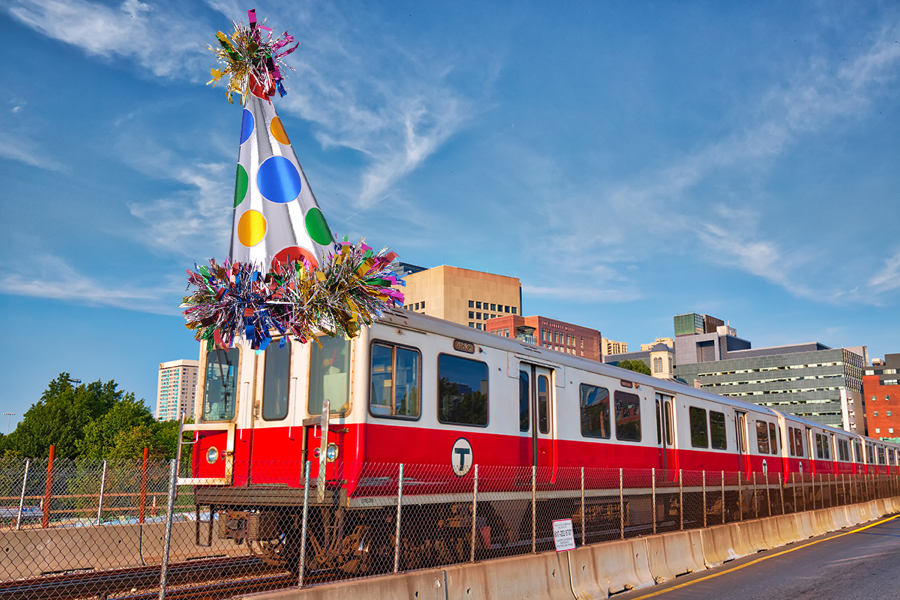 In so many ways, Boston is back. The MBTA, however, is not. Ridership has yet to return to anything close to pre-pandemic levels, a fact that may just portend an even grimmer era for traffic congestion, in a city that had already reached rock bottom in this regard.

No question about it, Boston will need more people to take public transportation in the post-COVID era. But more to the point, we need fewer people to take their cars. Clearly, emphasizing the civic imperative for doing so is not cutting it. So how can Massachusetts coerce more people back into Boston without relying on street-clogging personal hunks of metal? And how can it juice the numbers of people opting to head downtown even if they’re still working from home? Make the city’s transportation landscape more fun. After all, why shouldn’t taking public and shareable transit spark joy?

Here’s how we can make it happen.

Put buskers on the payroll

We love our buskers, don’t we? There is, of course, the piano playing bear who needs no introduction, and let’s not forget the city’s most extra violinist. There is also a smattering of lesser-known performers who’ve blessed our T stops with their talents for many years. They’ve all had a rough go of it recently. For one, with foot traffic lower than ever, their tip jars have no doubt been especially light in the COVID era. Add to that their well-documented struggles getting the unemployment assistance to which, in a just system, they would be entitled without question. An MBTA that provided more stable income to the musicians who brighten our commutes would be an MBTA that shows its riders it cares about the arts, and the artists who’ve been grinding it out for pocket change during rush hour for years.

Why let drivers get all the perks? Why not let shops and restaurants reward their customers for making a smart decision by taking the T? Consider that MassDOT has been subsidizing validated parking at garages near the North End since the Big Dig, giving that neighborhood’s customers access to incredibly cheap spots on their way to their next date night. Everyone seems to embrace this concept. Now imagine if state resources were brought to bear to encourage people to make a more sustainable choice?

Imagine for a minute a city program that would allow Boston shops and eateries to cover the cost of their patrons’ T passes for the trip to their door. Shaving a few bucks off the cost of a CharlieTicket may sound minuscule, but it’s not nothing, and from a human psychology perspective, the lure of a freebie, however small, should not be underestimated. Also, the city is already, at this very moment, using stimulus money to entice people to shop local via the new B-local app, which taps federal relief funds to create a redeemable points-based system usable at local small businesses. Creating another system that would validate T passes would be easy, cheap, and help kill two gigantic birds with one stone—boosting foot traffic in local stores and getting people back on the train in one fell swoop.

Spruce up the PSAs

In its quest to get uneasy former commuters back in their old habits, the MBTA has rolled out several public service announcements reminding riders how safe it is to board a train these days, the measures it took to deep-clean surfaces, gentle reminders to keep wearing masks, and so on. But where is the pizzazz??

In New York, the MTA recruited the likes of Jerry Seinfeld, Awkwafina, and Jadakiss to make star-studded announcements on its trains, and enlisted the help of mega-popular social media influencer New York Nico to spread the word about the subway. I mean, look at this lineup.

The T should not sit idly by as the MTA runs laps around it in the public relations game. Cut @zzzacharia a check, and run through the Boston Rolodex already. Get Mark Wahlberg to say hi to our mothahs for him, and visit them by train. Have Bill Belichick to tell us to do our jobs by riding the bus. Earnest video messages about the “light at the end of this dark tunnel” are a nice start, but a little more razzle-dazzle, and a little less promising you’re doing your best not to kill us, would go a long way.

Boston’s Reddit page, whose users never cease to amaze, have been fixated of late on an unlikely mascot: a Dunkin’ Donuts iced coffee cup that has been perched on a ledge in the Ashmont T-stop for over a month. A sense of camaraderie has emerged around this object, as commenters have shared their own tales of watching it sit there, undisturbed, day after day. Its popularity has even caught the eye of the Boston Globe. The MBTA should take heed of the FOMO such a sight foments in Boston’s transit-averse, and capitalize on it. Why not embrace the beloved cup? Elect it honorary GM for a day? Encase it in bronze and add it to Porter Square escalator’s ode to gloves. Why not squirrel away Dunkin’ cups in high-visibility areas of every T stop so as to delight commuters all summer long, and watch the adoration of fans come rolling in?

Remember the halcyon days of the electric scooter? Back when people were excitedly zipping around on cheaply rentable scooting devices just outside the city limits? At least until city hall and the state legislature can get their act together, they’ve been put on hold. But a return of this speedy, convenient, and just downright joyful way of bridging that final gap between a T stop and an office or other destination would undoubtedly entice more people out of cars.

During 2019’s successful e-scooter pilot program in Brookline, users said rentable e-scooters, in addition to being a fun novelty, were also practical and convenient enough that many said they had opted to use them instead of driving a car. Every opportunity we give commuters to mix and match—a train or bus here, a scooter or Bluebike there—makes them more confident about heading out without a street-clogging vehicle. Because really, how would you rather get to work? A quick jaunt on the T, plus a 10-minute zip atop an e-scooter in the fresh air, or a long, maddening slog in bumper-to-bumper tunnel traffic. Which one sounds more fun?

The same can be said for boats. Water taxis, a chronically under-appreciated component of Boston’s transportation network, are available on demand and criss-cross the harbor. It’s become a favored pastime of mine to hop on a water taxi every now and again, not because it’s the most convenient option available, but because being on the water for a few minutes is, well, fun!

Good news, then, that the Massachusetts Convention Center Authority is testing the, ahem, waters, with a new East Boston ferry pilot, which in September will offer pleasant little boat rides between Eastie and the Seaport for the bargain price of $5. I hope droves of Bostonians will take them up on the offer. Just imagine North Shore visitors hopping on the Blue Line, transferring to a ferry, and arriving at Legal Harborside without ever having to worry about parking. Sounds like a fun night out, right? And one that, by design, is car-free.

Now hear me out, imagine if all or part of that journey were free.

Make the T free, even for a little while

Using extra revenue on a sales tax-free weekend? Or even, as the governor recently proposed, two tax-free months? That’s certainly one way to use public funds. Here’s another: Fare-free MBTA. Try it for a few days, or weeks, even. Just for the hell of it, see if riders would come streaming back to the service if they knew it wouldn’t cost them a penny to do so. Call it Fare-Free August. Promote it like a party. Hand out T-shirts and temporary tattoos. People love free samples. They would adore free transit. Sounds fun, doesn’t it?