Ever Lost a Million Dollars in 24 Hours? With VaxMillions, Now You Can 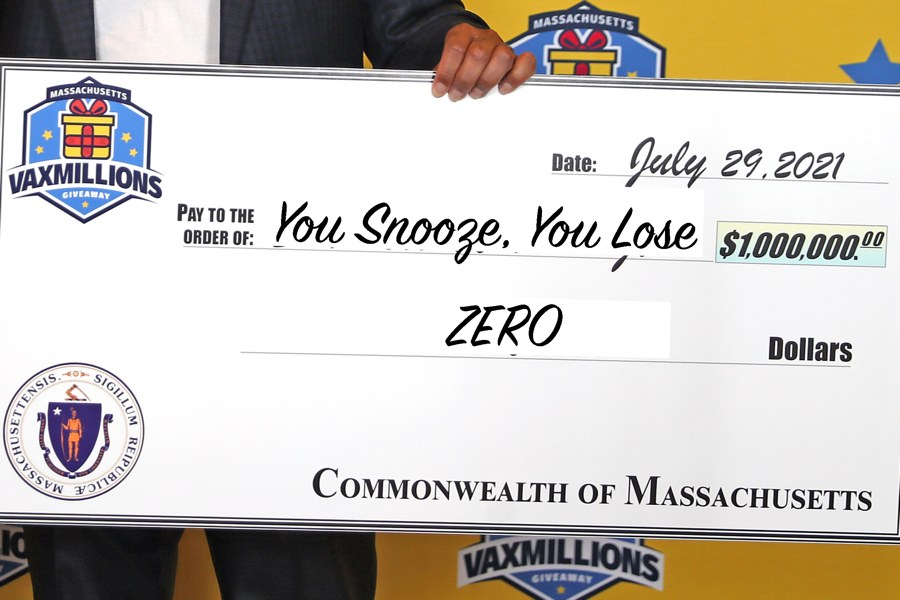 VaxMillions is a great idea. Like all great ideas, it’s simple: Get vaccinated, and get the chance to win one million dollars. Try to sweet talk the unvaccinated all you want, but talk is cheap. Cash spends.

It has also created conditions in which the odds for taking home the big one are better than ever. The state says about 2 million people have signed up for the program. Given that the likelihood of winning the big one in a typical lottery drawing of this size is much, much smaller—like a hundred times smaller—one in two-million is a hell of a thing.

There is, however, a catch: If you win, you need to claim your prize in 24 hours, or else. According to the state’s rules for the contest, if you fail to claim your prize in that frighteningly short window of time, you’re disqualified. And as it says explicitly in the contest’s rules, any disqualification is “final and not subject to appeal.” Which sets up a not-implausible scenario in which you, dear reader, might both win and lose a million bucks in one (1) calendar day—a feat few of even the highest-rolling high-rollers at the Encore have ever achieved.

So far, no one has succumbed to such a fate. A spokesman for the governor’s office tells me the first week’s drawing went off without having to disqualify anyone, and both winners were successfully contacted within a matter of hours. The second drawing was underway on Monday, August 2.

But it’s not that far-fetched a possibility that someone might fall through the cracks.

Consider that, year after year, millions of dollars in Massachusetts lottery winnings of all sizes go unclaimed, including eight prizes of $1 million or more that were unclaimed as of January. Typically, winners in the state have a full year to claim their prizes, not a few precious hours. And those are people who spent their own hard-earned money for a shot at the jackpot.

There’s also the fact that people these days are especially wary of hackers and thieves. At least, they ought to be. These past two years have been plagued with scams of all stripes, be they phishing emails seeking the password to your bank account, or phone calls about fake FBI investigations or supposedly dire warnings about your car’s warranty. For years, the Massachusetts Lottery itself has warned residents to distrust emails or calls announcing they’ve won the jackpot (after all, state lottery officials don’t typically have to contact winners, as they don’t know you’ve won until you reach out to them). You could imagine a would-be winner simply scrolling right past the fateful VaxMillions email or screening that phone call without a second’s hesitation.

In fact, that’s what both of last week’s winners said nearly happened to them. “With all of the spam calls and emails that everyone’s getting, I was like ‘OK I’ve never seen this number before,'” said Darrel Washington, the 63-year-old from Weymouth who claimed the first prize, in a press conference last week, adding that he opted to research the name that up on his caller ID before following up. “I wasn’t ready to jump the gun,” he said. The other winner, a Chelsea high schooler, said she also “thought it was a scam” at first, but that she and her mom were ultimately convinced the win was legit.

‘I Thought It Was A Scam’: Darrell Washington Of Weymouth, Daniela Maldonado Of Chelsea Named First VaxMillions Winnershttps://t.co/ROc4UbO6ey

It’s sort of a harsh system, but you can’t blame the state for running things this way. The state says the 24-hour rule is necessary because of the “limited period of time to locate and verify the eligibility of potential winners due to the fixed weekly schedule for drawing and announcing.” They’ll take a little longer to confirm your vax status once they’ve contacted you (three attempts to contact your vaccine provider over 36 hours), but that initial outreach happens in a hurry.

At the end of the day, the primary purpose of VaxMillions is not to enrich the lives of a half-dozen residents. It’s to spread the good word about vaccines, maybe spark a little bit of lottery FOMO, and provide “another reason and opportunity for people to choose to get vaccinated,” as Gov. Baker put it back in June. So if your name happens to be chosen over the next month, the state ultimately isn’t that invested in you being the winner. If they can’t find you to help with this cause, they’ll just as happily find someone else—and to stay on schedule, they’ll do it quickly and mercilessly if they have to.

The mind reels at the potential tragedy of being selected for this prize and then, for one reason or another, having it slip through your vaccinated fingers. What if you happen to have an overly aggressive spam filter, or your voicemail box is full? What if, God forbid, you decide to spend a week camping off the grid in the Maine woods and are utterly unreachable?

Despite the nausea-inducing panic that the prospect of losing a million dollars provides, hopefully this whole process has encouraged a significant number of holdouts to get jabbed. If, in order to keep this pro-vaccine publicity machine humming and on schedule over the program’s remaining four weeks, we’re all asked to be slightly on edge about missing the most lucrative email or phone call of our entire lives, then so be it.